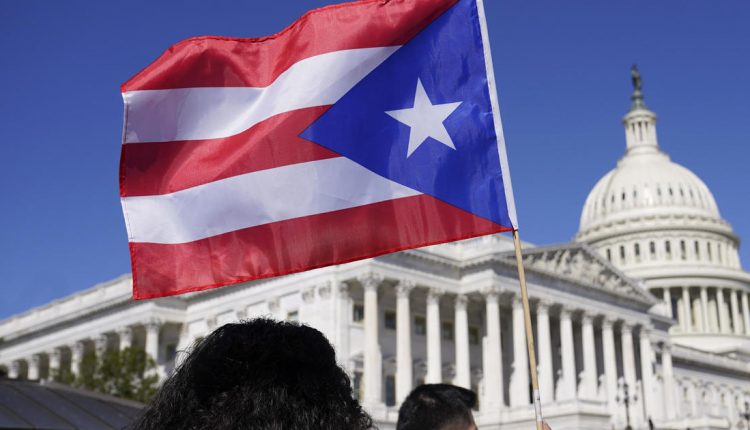 Democratic lawmakers on Tuesday tried to lay the groundwork for Puerto Rico to become a state, introducing a bill that would set up a vote for residents to decide on statehood and the election of its own senators and representatives.

The bill was introduced by Representative Darren Soto of Florida, a Democrat, and Delegate Jenniffer González-Colón, the island’s resident commissioner, a Republican, and Senator Martin Heinrich of New Mexico plans to introduce it in the Senate. The measure has the backing of Puerto Rican Governor Pedro Pierluisi. Its supporters argue that the federal government doesn’t treat Puerto Rican citizens equally, something statehood would help rectify.

Soto says the bill has about 50 co-sponsors. At a news conference Tuesday, he pointed to the hardships the island has endured, including the devastation wrought by Hurricane Maria in 2017, and he argued residents deserve the same representation as all Americans.

“They have finally decided that enough is enough, that their territorial status and second class citizenship isn’t working and it’s time for change,” Soto told reporters.

But the bill contradicts a proposal written by Puerto Rican Representatives Nydia Velázquez and Alexandria Ocasio-Cortez last summer. The two outlined a panel of elected delegates who would decide what the best long-term solutions would be for the island, giving the options of independence or a statehood or territory status. Ocasio-Cortez wrote in an opinion piece on NBC News at the time that the island’s residents should determine for themselves if they want statehood. “The key is that this framework would be developed by Puerto Ricans and for Puerto Ricans, not dictated to them like so many previous policies,” the two wrote.

The proposal received instant backlash from pro-statehood supporters in the House.

In November, Puerto Rico residents voted 52 to 48% in favor of immediate statehood on a ballot referendum. But congressional passage of Puerto Rico statehood is far from guaranteed. In the Senate, the measure would need 60 votes, and Minority Leader Mitch McConnell has declared that statehood for the island would result in the election of two more Democratic senators, though there’s no guarantee that this would be the case.

While the new bill does not address the $129 billion in debt that is crushing the island, González-Colón said Puerto Rico currently does not have enough programs to “get out of poverty.”