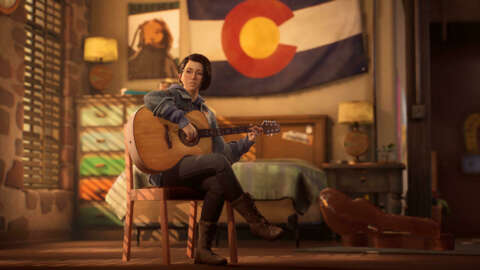 A free issue of the ongoing Life is Strange comic series, Partners in Time, will be released on August 14, the game’s official Twitter account has revealed. The issue will be published by Titan Comics as a part of Free Comic Book Day 2021–an event created to encourage purchasing comics locally–and contains not only the next chapter of the Partners in Time series, but a prequel to the next entry in the game series, Life is Strange: True Colors. According to the tweet, the issue will be divided into two stories: one centering around Life is Strange veterans Max Caulfield and Chloe Price, and another following the series’ new protagonist, Alex Chen.

The first story is the next chapter in the ongoing Partners in Time series, which follows the aftermath of Life is Strange assuming players selected the game’s “bad” ending and saved Chloe at the expense of Arcadia Bay. Additionally, the story features another returning character, Life is Strange: Before the Storm’s Steph Gringrich, who is confirmed to be in the upcoming True Color game and could indicate the story will bridge the time gap between the events of the first game and the upcoming title.

The second half of the comic provides readers with a first look at the town of Haven Springs and Alex Chen, the telepathic protagonist of Life is Strange: True Colors. The comic is said to cover the events leading up to the game, which is set to release in its entirety–a first for the Life is Strange series–on September 10.

Announced last month, Life is Strange: True Colors is the fifth entry in the Life is Strange series, and the second developed by Deck Nine Games rather than Dontnod Entertainment. Just like in the series’ previous installments, True Colors follows a protagonist with superhuman abilities who uses them to deliver a heartfelt story. For Alex Chen, it’s her power of Empathy, which allows her to experience the emotions of others. While this power is a great tool for understanding the motives and emotions of those around her, this unnatural gift can prove overwhelming for Alex–especially while trying to manage her own grief.

Got a news tip or want to contact us directly? Email [email protected]m

“F9” To Flashback To The First “Fast”