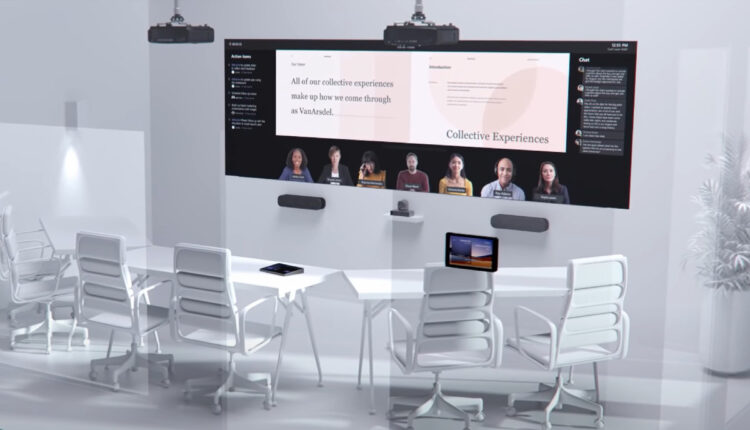 Like any science-fiction scenario, Microsoft’s vision of the future office-meeting is partially based on aspiration, and partially on reality. A Microsoft Teams concept video that the company released in advance of its Microsoft Build conference reveals a world in which remote workers are projected onto massive displays, complete with hidden mics and more.

If this office vision sounds vaguely familiar, it’s because we’ve seen the idea surface before. In 2018, for example, Microsoft’s Build keynote featured a concept video that showed off a cone-shaped smart speaker, powered by Cortana. That was two years into the lifespan of Microsoft Teams, Microsoft’s video and collaboration platform.

Not surprisingly, Microsoft’s latest concept video is also centered around Teams. In it, the company acknowledges that we’ll be returning to a “hybrid” model of at-home and in-office meetings, with neither group having priority of the other. Microsoft does that, in part, by growing the conference room’s video screen to near life-size proportions, giving remote workers a (virtual) seat at the table, so to speak. Rather than relying on cameras within discrete devices, the display will feature its own cameras.

Of course, that’s an attribute of Microsoft’s own Surface Hub 2S. Other aspects, though, are new, such as placing the display’s integrated camera at eye level, so that remote and in-person participants naturally make eye contact. Microsoft also prioritizes spatial audio, to offer lifelike sound, and mounting those mics into the display and the room at large.

Like the 2018 concept, meeting chat and transcriptions of the meeting will be central to Microsoft’s meeting experience, allowing participants the opportunity to focus on the meeting rather than take notes. This is a feature that’s risen to prominence among various meeting solutions over the past year, from Teams’ own transcription services to Zoom’s partnership with Otter.ai.

It’s also interesting that Microsoft foresees different experiences emerging based on meeting size. Again, the Surface Hub 2S makes an appearance—but now to display  multiple screens stitched together. Here cameras function as discrete devices, swiveling to pick up and highlight who’s speaking. Microsoft sees this as a subtle but important distinction, to show remote workers specifically who is speaking.

Microsoft excluded one technology from its vision—or at least didn’t name it specifically. That’s Cortana, which once was seen as a personalized assistant but is now more of a collection of AI capabilities in service of Microsoft 365 and Outlook. Microsoft’s vision includes Teams smart speakers, essentially a remote mic that can pick up voices, together with small displays that can serve as alternate screens or mechanisms to control the meeting.

This is the sort of presentation that would normally be featured at Microsoft Build, Microsoft’s developer conference. That it’s coming out earlier could mean Microsoft it taking a geekier approach to Build this year, shying away from Teams-related presentations to focus more on the underlying code. If so, Microsoft’s still building some interest in Microsoft 365 and Teams without letting this concept vision take center stage. Will you experience such a conference room if and when you and your colleagues return to the office? Regardless, it’s certainly true that the concept of “working” probably won’t be confined to a single physical space for some time.

Watch “Microsoft Teams: The future of meetings” below to see the concept in action.