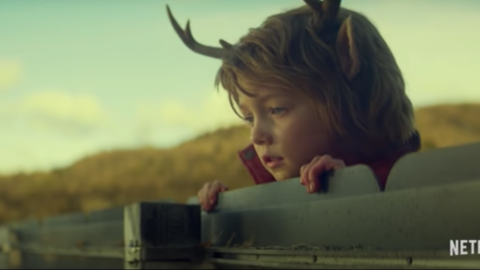 Netflix has released a short video diving into how it set about adapting the DC comic Sweet Tooth into a live-action series. The series, based on the Jeff Lemire comics by the same name, is set to premiere on the streaming service on June 4.

In tandem with the recently released first trailer, this new video gives fans a great idea what to expect from the show. This new clip features interviews from showrunners Jim Mickle (In the Shadow of the Moon, Hap and Leonard) and Beth Schwartz (Arrow, Legends of Tomorrow), executive producers Susan Downey and Robert Downey Jr., cast members Christian Convery (Pup Academy) and Nonso Anozie (Game of Thrones), and Lemire. Check it out below.

Sweet Tooth is set 10 years after the emergence of “hybrids”–children who are born part-human, part-animal, and are now feared and hunted by humans. The show focuses on a hybrid deer-boy named Gus, who befriends an adult wanderer named Jepperd, and sets off on a dangerous adventure to find out about Gus’s origins. Note that this series, while similarly named, has nothing to do with the plans to adapt Sony’s video game Twisted Metal into a new TV series, which is rumored to have cast Will Arnett as the character Sweet Tooth.

The comic book Sweet Tooth was published by the DC Comics imprint Vertigo, and was written and illustrated by Lemire. It ran for 40 issues between 2009 and 2013. The TV adaptation was originally set to be made by Hulu, but moved to Netflix in 2020.

Bethesda Spring Steam Sale Lets You Save On Wolfenstein, Doom, Skyrim, And More