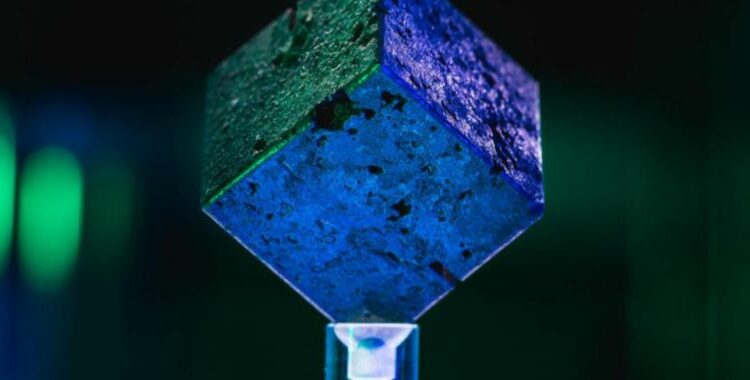 For decades, the Pacific Northwest National Laboratory (PNNL) has been home to an unusual artifact from World War II: a small cube of solid uranium metal, measuring about two inches on each side and weighing just under 2.5 kilograms. Lab lore holds that the cube was confiscated from Nazi Germany’s failed nuclear reactor experiments in the 1940s, but that has never been experimentally verified.

PNNL scientists are developing new nuclear forensic techniques that should help them confirm the the pedigree of this cube—and others like it—once and for all. Those methods could also eventually be used to track illicit trafficking of nuclear material. PNNL’s Jon Schwantes and graduate student Brittany Robertson presented some of their initial findings this week at the fall meeting of the American Chemical Society (a hybrid virtual/in-person event).

University of Maryland physicist Timothy Koeth is among the outsider collaborators in this ongoing research. He has spent over seven years tracking down these rare artifacts of Nazi Germany’s nuclear research program, after receiving one as a gift. As of 2019, he and a UMD colleague, Miriam Herbert, had tracked down 10 cubes in the US: one at the Smithsonian, another at Harvard University, a handful in private collections—and of course, the PNNL cube.

What makes these cubes so special is their historical significance. As we reported previously:

Underpinning the Manhattan Project in the US was the fear that German scientists under Adolf Hitler’s Nazi regime would beat the Allies to a nuclear bomb. The Germans had a two-year head-start, but according to Koeth, “fierce competition over finite resources, bitter interpersonal rivalries, and ineffectual scientific management” resulted in significant delays in their progress toward achieving a sustained nuclear reaction. German nuclear scientists were separated into three isolated groups based in Berlin (B), Gottow (G), and Leipzig (L).

Renowned physicist Werner Heisenberg headed up the Berlin group, and as the Allied forces advanced in the winter of 1944, Heisenberg moved his team to a cave under a castle in a small town called Haigerloch—now the site of the Atomkeller Museum. That’s where the group built the B-VIII reactor. It resembled an “ominous chandelier,” per Koeth, because it was composed of 664 uranium cubes strung together with aircraft cable and then submerged in a tank of heavy water shielded by graphite to prevent radiation exposure.

As the German scientists were racing against time, Manhattan Project lead Lieutenant General Leslie Groves kicked off a covert mission dubbed “Alsos,” with the express purpose of gathering information and materials related to Germany’s scientific research. When the Allied forces closed in at last, Heisenberg took apart the B-VIII experiment and buried the uranium cubes in a field, ferreting away key documentation in a latrine. (Pity Samuel Goudsmit, the poor physicist who had to dig those out.) Heisenberg himself escaped by bicycle, carrying a few cubes in a backpack.

As Heisenberg himself acknowledged, the German scientists’ final experiment failed because the amount of uranium in the cubes was insufficient to trigger a sustained nuclear reaction. But Heisenberg was confident that “a slight increase in its size would have been sufficient to start off the process of energy production.” A model described in a 2009 paper bears that out, showing that the group would only have needed 50 percent more uranium cubes to get the design to work. If it had, our world might look very different today.

The Alsos team purportedly brought the cubes confiscated from Berlin to the United States for use in the uranium processing facility at Oak Ridge. However, Koeth learned that, by April 1945, the US didn’t need additional feedstock material. And there is no official record of any cubes entering the country, so most of them have never been accounted for. Ditto for the 400 or so uranium cubes that had been in use by the Gottow group, led by Kurt Diebner.

According to PNNL lore, their cube was stored at DOE headquarters until 1989. That’s when it was brought to the laboratory as a radiation training tool for RadCAD, a set of hands-on courses on the detection and interception of illicit trafficking in radioactive materials.

The PNNL cube, like its brethren, is made of solid natural uranium metal. The cubes are only slightly radioactive and don’t pose a health concern. Because uranium is so dense, it essentially shields itself. Any measured radiation comes from the surface. Nonetheless, the PNNL cube is kept in a double-plexiglass container to prevent exposure to radiation during handling and contamination of the cube from oxidization, according to Robertson.

The PNNL scientists were pretty confident they had a “Heisenberg cube”; among other evidence, the cube is notched, the better to hang on the cables used in the German reactor efforts. But that evidence is largely anecdotal, per Robertson and Schwantes. The cube was analyzed back in 2002 via high-resolution gamma spectroscopy to get an estimate of its age, but those results were inconclusive. “That’s typically not sensitive enough to provide an accurate age for the cube,” said Schwantes.

Several years ago, as the PNNL cube was being repackaged, Schwantes and a colleague shaved a few small samples off the metal for analysis. They hoped to confirm once and for all that it is one of the Heisenberg cubes—or possibly a “Diebner cube.” Robertson’s work—part of her doctoral thesis research—is to study those samples using her own modified analytic techniques, in conjunction with PNNL’s standard nuclear forensic methods.

For instance, radiochronometry is a popular method with geologists. It’s commonly used to determine the age of a uranium-rich material by measuring the byproducts of the uranium’s decay, namely the radioactive isotope thorium-230 and protactinium. Robertson’s modified approach involves simultaneously separating the thorium and protactinium in the hope that the materials’ relative concentrations will give some indication of when the cube was made. In addition, analyzing the rare-earth-element impurities could help PNNL scientists determine where the original uranium was mined.

“Kind of a long shot”

So far, initial findings have confirmed that at least one of the three cubes being tested at PNNL is natural uranium. There are also preliminary results from Robertson’s analysis of the coatings the Germans applied to the cubes to keep oxidation in check. Cyanide-based coatings were used by the Berlin group, while Diebner’s Gottow group used styrene-based coatings. If one could accurately measure the relevant signatures, it would enable the team to tell whether a given cube came from the Berlin or Gottow group.

“As far as we know, no one else has performed this measurement,” said Robertson. “And I have to be honest, I thought it was kind of a long shot. I didn’t think an organic would last sitting next to uranium metal for this many decades and still be detectable.”

That long shot paid off. Koeth’s cube was among those tested, revealing a styrene coating—a bit of a surprise, given that Koeth’s historic sleuthing tracked the cube to the Berlin group. However, it turns out that Diebner sent some of his group’s cubes to Heisenberg in Berlin when the latter sought more fuel for his reactor. So Koeth’s cube may possibly have been used by both groups.

Radamel Falcao: Why one of La Liga’s most prolific goalscorers is a Madrid hero once more