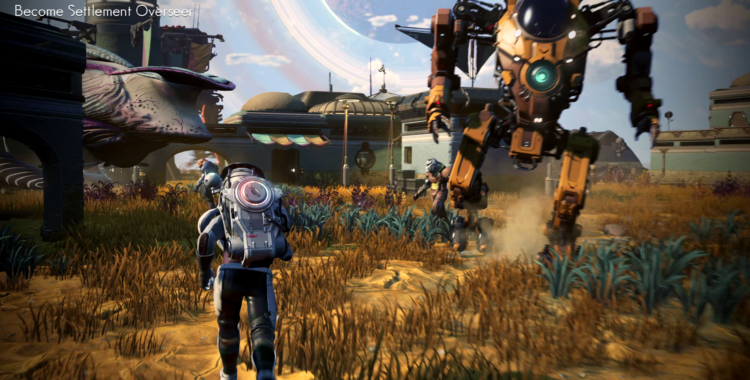 Can you believe it has been five years since the gaming Internet first lost its mind about No Man’s Sky? The ambitious game launched in 2016 with a seemingly infinite galaxy and clearly finite mechanical systems—a beautiful portal to interactive zen, yes, but arguably not what salivating fans had imagined in the hype-filled run-up.

But if you’ve booted the game in the years since, you may have noticed that it is a massively different gaming proposition than its August 2016 incarnation. With free update after free update, the game has grown to something beyond its initial pitches—and today, it grows further still with its… hold on, let me carry the one… seventeenth free content update.

This 17th dump of content, dubbed No Man’s Sky: Frontiers, will arrive on all versions of the game (including VR) shortly after this story goes live. Now, the game’s procedurally generated planets will include a bunch of procedurally generated towns, villages, and settlements. As you take off and land on the game’s estimated 18 quintillion planets, you’ll now find miniature towns dotting their landscapes, each full of townspeople who hail from the game’s various races, milling about a variety of endlessly remixed building types.

Should you stumble upon a settlement that you like, you can “submit management credentials,” perhaps by talking to the people there or doing a simple quest, to become its “overseer.” That job’s duties land somewhere between high-ranking mayor and lowly, Animal Crossing-like errand runner, and the description indicates something more lively than in existing NMS zones: “The settler population will look to you for town planning, treasury management, policy decisions, and conflict resolution.” If you see a few NPCs having a row over something, you may be asked to complete a quest to resolve it or be forced to pick a side. Dump in-game resources into your settlement, and the townspeople will convert them into more, bigger, and better buildings. Or open up your own building editor, access an entirely new inventory of building tools, and mold your town into the shape of your dreams (aided in part by a newly updated HUD for both settlement and base editing).

While I don’t necessarily expect anything as involved as an average MMORPG’s series of town-related quests, Hello Games’ patch notes suggest additional quest elements attached to any settlement you oversee—and the studio has been keen on adding more clearly defined tasks and quests to its game over the years, particularly the “Expeditions” series of missions. These ask players to start a separate blank save file, begin traveling from a fixed point, and follow clues in search of limited-time treasure that unlocks in players’ other progress-filled save files. Unsurprisingly, NMS has another Expeditions series launching in short order, though Hello Games hasn’t confirmed exactly when this quest line, dubbed “Cartographers,” will go live.

The above gallery shows teases of what NMS‘s settlements can look like in the course of interstellar traversal, and they also offer a hint of the patch’s updated visual effects. One flashy image above shows a new, colorful “nebula” explosion of outer-space clouds, which the patch notes describe as merely pretty (though I can’t help but wonder if they hide an in-game secret), while the patch notes also mention “punchier” weapon blasts and explosions. Those don’t appear in the below video, but it won’t be long before you can fire up your own copy of the game, download the patch, and alternate between blasting and settling yourself.

Speaking of amounts of time: with NMS entering its sixth year of content updates, Hello Games has remained coy about what other games it may ever make. So far, all we’ve seen is the studio’s charming indie puzzler The Last Campfire, made by a three-person team within Hello Games and released in 2020 as part of its modest “Hello Labs” game-incubation initiative. The studio’s last public data point about NMS‘s popularity came in 2017, when studio lead Sean Murray confirmed “one million” people had played the game’s “Foundation” update in its first four months of going live.

While the studio doesn’t make a single penny from existing customers when new patches go live, since NMS doesn’t include in-game transactions, either the game’s continued update cadence continues driving new game purchases, or Murray likes throwing cash around haphazardly. Either way, thanks for the continued fun, Hello Games.

Google Pixel 5a review: “Which Android phone should I buy?” This one