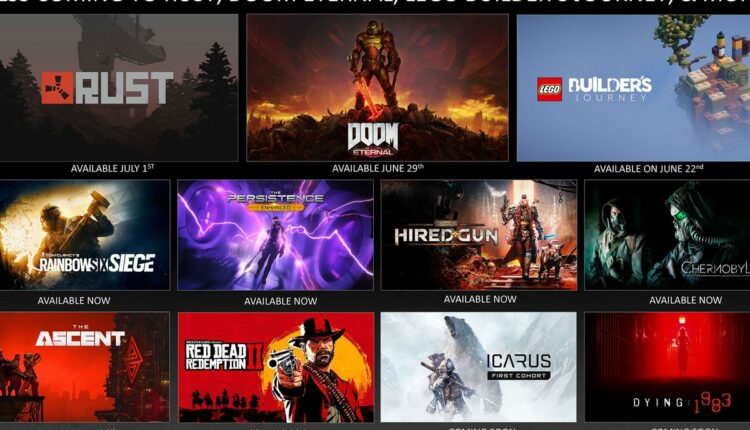 Nvidia beefs up DLSS with more games and Linux support

In the war to prove who’s better at high-resolution gaming performance, Nvidia on Monday added three more allies: Rust, Doom Eternal and Lego Builder’s Journey are joining the more than 55 other games to support its DLSS technology. The company also said Linux gamers would soon get access to DLSS through Proton for Vulkan.

DLSS, or Deep Learning Super Sampling, taps the AI Tensor cores on Nvidia’s 2000- and 3000-series GPUs to render games at a lower resolution, with comparable visual quality when increased to a higher resolution. We’ve tried DLSS, and it’s like black magic.

The company said that starting June 22, Linux gamers can download the Nvidia Linux Driver and enable Proton by going into steam to get DLSS in such games as Doom Eternal, No Man’s Sky and Wolfenstein Youngblood.

Nvidia’s announcement comes just a day before its rival AMD is set to unveil its highly-anticipated FidelityFX Super Resolution technology. Although we don’t yet know how AMD’s FSR works, the company has said FSR will offer increased performance on graphics cards as old as its Radeon RX 480, as well its current Radeon RX 6000-series of GPUs. AMD has also said FSR can improve performance even on Nvidia’s older GeForce GTX 1060. AMD’s technology is obviously built without the need for AI cores on the graphics card, so many assume it’s some type of advanced upsampling.

Nvidia’s Henry Lin, who briefed the press on the news, said he didn’t know what FSR will do, but he said traditional upsampling just doesn’t hold up against DLSS 2.0. “Upscalers make compromises because it inherently doesn’t have enough information,” Lin said. DLSS 2.0 relies on a rendered lower-resolution image such as at 1080p, which is combined with motion vector information, as well as trained AI models from its super computer clusters and also temporal feedback from the previous “4K super resolution output” frame that was just made by DLSS 2.0. In theory (and many would seem to agree) this results in impressive frame rate increases at higher resolutions with comparable visual quality, without the flickering that often happens with upsampling.
Lin said it just takes a lot of data to get the quality it’s getting with DLSS 2.0 which, if you think about it, takes a 1080p, 2-megapixel image, and then generates a 4K, 8.2-megapixel image from it.

Lin said Nvidia already has an upsampling and sharpening technology available, but it would never call that super resolution. Upsampling just doesn’t have enough bite, he said. “Even if you sharpen edges, the details just won’t be there.”

Some observers have compared Nvidia’s proprietary DLSS to AMD’s open approach with FSR to Nvidia G-Sync vs. AMD’s FreeSync all over again. In that battle, most agreed Nvidia’s proprietary and pricier G-Sync technology and certification program was the superior technology, but FreeSync’s low cost motivated far more monitor makers adopt it. Nvidia eventually had to pivot and support FreeSync with its own G-Sync Compatible program.

Lin questioned that comparison. “We’re in the majority of the first party engine as well as the long tail,” Lin said. “And we’ve democratized through plugins, and mainline for Unity the ability for any developer to add DLSS. So that friction of adding DLSS or even getting it right away out of the box is pretty low.”

The company said any comparisons of DLSS 2.0 with FSR wouldn’t be on equal footing unless FSR can produce image quality close to or better than native resolution, which Nvidia said DLSS 2.0 can do. Nvidia officials also defended its traditional approach as good for gamers and innovation, allowing technology to push forward faster than governing bodies would have enabled.

Although many people accuse the company of having mostly closed technologies, the company pointed out that many of its innovations are now open-source and available on Github, including the code for PhysX, HairWorks, and even the company’s once-controversial GameWorks.

Lego Builder’s Journey will add DLSS support on Monday, while Doom Eternal will see it enabled on June 29. Finally, Rust will get its DLSS legs on July 1.

Creating Boundaries in Our Everyday Work (with Roxane Gay)

Save $20 On First-Party Nintendo Switch Games In Rare Sale