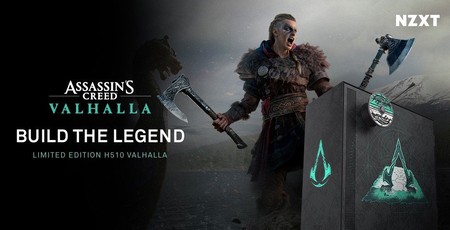 Bit-Tech reported upon two previous custom NZXT gaming themed chassis; the World of Warcraft themed design from 2019, and a Rainbow Six Siege themed design a year ago. Sometimes third time is a charm and the latest collaboration with Ubisoft might be the most appealing yet, with its Viking rune motifs and lighting.

In a press release NZXT says that the new Limited Edition CRFT 08 H510 Valhalla, to give it its full title, is “a case worthy of a Viking conqueror.” However, I think the PC components shortage was even worse back in the dark ages, so that is a rather frivolous boast.

Key design elements of the H510 Valhalla can be summed up as follows: In addition to the above you get all the great features of a standard NZXT H510, such as:

NZXT says the new H510 Valhalla case is available now, but please remember that it is a limited run and availability depends on market. You can order it direct from NZXT for $249.99 in the US. Have a look at your usual distributors.

The 10 Best Puzzle Games of the last ten years.