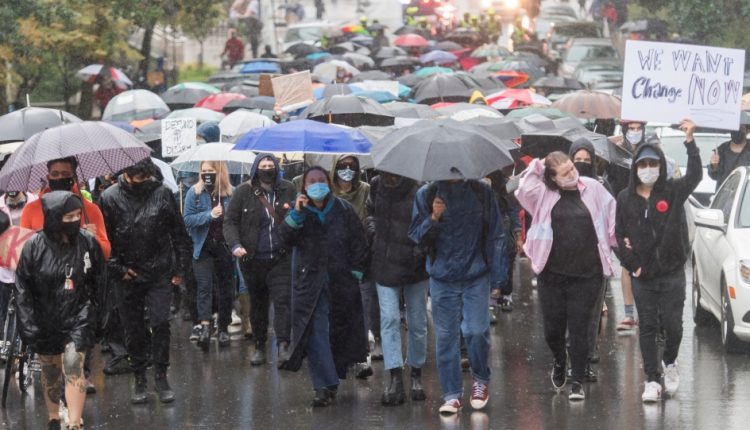 TORONTO — Peaceful protests were held in cities across Canada on Saturday as protesters urged governments to slash police funding and do more to tackle deep-rooted racism in this country.

Rallies to defund the police were held in Calgary, Halifax, Fredericton, Toronto, Montreal and London, many of which were organized by the Coalition for Black, Indigenous and People of Colour (BIPOC) Liberation group.

The group’s list of demands includes cutting police funding, the creation of more accessible housing units, reparations for radicalized and Indigenous communities and the removal of the RCMP from Indigenous lands.

The group is also demanding the removal of all monuments of any person who “promoted slavery, anti-Black racism, or anti-Indigenous racism.”

In Montreal, protestors tore down a statue of John A. Macdonald at Place du Canada where it was beheaded as it fell to the ground. In the past, the statue has been defaced by protestors demanding that it be removed because of Canada’s first prime minister’s treatment of Indigenous people.

Demonstrations in Toronto were organized by several groups including “Not Another Black Life” and “Afro Indigenous Rising,” which both called on police funds to be redirected toward marginalized communities.

The Toronto protestors marched across the city and called for city council to cut the police budget in half.

The Toronto Police Service operating budget for 2020 is $1.22 billion, about 9 per cent of the city’s $13.53 billion operational budget for 2020. More than $3 billion is distributed for various social support and development programs including employment, social assistance, child-care, long-term care services, helping under-resourced neighbourhoods, housing and shelter support.

Analysis by CTVNews.ca of 18 of Canada’s largest cities, regions and provincial capitals found more than half allocated 15 percent or more of their 2020 operating budget to policing, with cities in Western Canada budgeting 20 percent or more.

People attend a demonstration in Montreal, Saturday, Aug. 29, 2020, where they protested to defund the police with a goal to end all systemic racism within all sectors of the Canadian government. THE CANADIAN PRESS/Graham Hughes

In London, hundreds of protesters gathered at a park where they called on all three levels of government to invest in initiatives to provide mental health services for Black and Indigenous communities.

Groups including Black Lives Matter YYC and Rights for All Refugees in Canada (RARICA) gathered in Calgary to demand an end to police violence against Black transgender people. More than 150 protestors filled the streets in support of the Black, Indigenous and LGBTQ community.

The Calgary group is pushing for a series of changes including more accessible housing, healthcare and employment for marginalized people and safer public spaces for the community.

In Halifax, a celebration of life was organized for Regis Korchinski-Paquet, a 29-year-old Black woman who fell to her death from her balcony in Toronto after police were called to her apartment for a wellness check in May.

The event was organized in support of Korchinski-Paquet’s family and included guest speakers and a balloon release in the Black community of Africville.

After a review of photos, security video and 911 recordings, Ontario’s police watchdog determined earlier this week that there were no reasonable grounds to lay charges against officers in connection with Korchinski-Paquet’s death.

The Canadian protests were held on the same day as rallies across the U.S. following the shooting of Jacob Blake, a 29-year-old Black man from Wisconsin who was left paralyzed from the waist down after a police officer shot him in the back.

Blake’s family led a peaceful protest on Saturday where hundreds of demonstrators stood alongside them to demand justice.