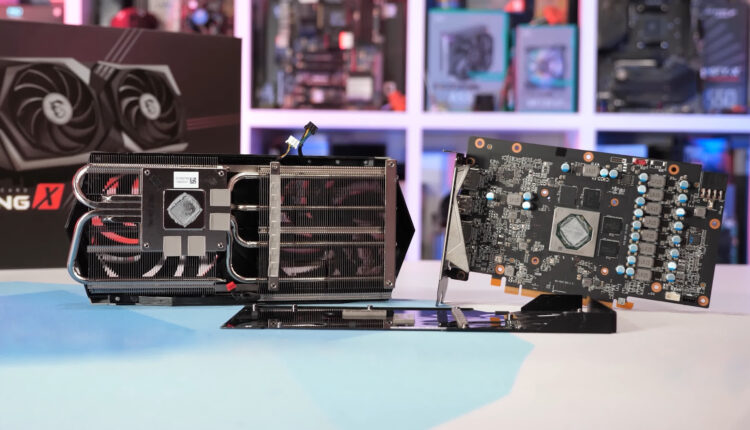 Today we’re comparing the new Radeon RX 6600 XT head-to-head against the GeForce RTX 3060 in 30 games. This will give us a good idea of how these two GPUs compare, and also give us a second chance to sort of re-review the 6600 XT using real retail pricing, which is kind of nice considering the day-one review was based on assumptions made a week before the 6600 XT hit shelves, so pricing and availability were largely unknown.

Speaking with retailers, it did sound as though supply was going to be better. Based on the markup we were seeing for 6700 XT at eBay, we expected that the 6600 XT would cost around $570, and three weeks later the actual figure is close to that at $605. At the time, the average sale price for the RTX 3060 was $720 which remains unchanged. So the Radeon RX 6600 XT is a little worse than we estimated before launch, but it’s still better value than the RTX 3060, at least based on the 12 game sample used for the day-one review.

Today we’ll be taking real-world pricing data and comparing it across a much larger 30 game sample to see which GPU offers gamers the most value. We’ll also take a look at ray tracing performance in the new F1 2021, along with Metro Exodus Enhanced which is a follow-on from the Cyberpunk 2077, Doom Eternal, Resident Evil Village, and Watch Dogs Legion results which were featured in the original review.

For all this testing we used our Ryzen 9 5950X test system with 32GB of DDR4-3200 CL14 dual-rank, dual-channel memory. Both GPUs were tested at 1080p, 1440p and 4K. Of the 30 games tested, we’re going to discuss a few of the most relevant results and then we’ll take a look at how these two GPUs compare head-to-head across all games in a single graph towards the conclusion.

Starting with Borderlands 3, we have a rare example of an Unreal Engine 4 game that runs exceptionally well with Radeon GPUs. Here the 6600 XT was a massive 28% faster at 1080p, delivering 92 fps on average using the ultra quality settings which is actually the second-highest quality preset in the game. The 6600 XT was also good for 65 fps on average at 1440p and that meant it was still 27% faster than the RTX 3060, so an easy win here for AMD.

The 6600 XT jumps back out in front when testing with Death Stranding, though it has to be said both GPUs delivered excellent performance using the highest in-game quality preset. Although the Radeon was 20% faster at 1080p, the RTX 3060 was still good for 132 fps on average. The margin was slightly reduced at 1440p to 18% in favor of the 6600XT, but even so, the GeForce GPU was good for almost 100 fps on average.

Days Gone, like Warhammer, is another example where the 6600 XT ends up trailing the RTX 3060, and although the margin isn’t huge, we saw very few examples of this in the day-one review. Here we’re looking at 5% less performance for the Radeon GPU at 1080p, and 8% less at 1440p.

F1 2021 is the latest title to be added to the huge list of games we benchmark with, and this one enables ray tracing by default on supported hardware when using the ultra high quality preset. That being the case we left it enabled. The 6600 XT does surprisingly well relative to the RTX 3060 as both GPUs delivered comparable performance at all three tested resolutions.

Metro Exodus Enhanced requires hardware-accelerated ray tracing support and without it you’ll have to play the original version of the game, which frankly isn’t a big deal, but since both of these GPUs support ray tracing it makes sense to benchmark with the ‘Enhanced’ version. Again, performance is fairly similar at all three tested resolutions, the RTX 3060 was just 4% faster at 1080p which we saw identical performance at 1440p.

Next up we have Red Dead Redemption 2. We’re using “high” quality settings which have to be set manually as this game doesn’t have fixed presets which is super annoying. Anyway, at 1080p the 6600 XT was 9% faster than the RTX 3060, so a decent little win there, but at 1440p performance is much the same, and then exactly the same at 4K.

CS:GO really is a CPU benchmark at this point, with any half-decent GPU resulting in heavily CPU-bound testing, but it’s always hotly requested, so we feel compelled to include it, and don’t mind doing so when there are so many other games to balance out the results. As expected, we’re looking at similar performance between these two GPUs at the three tested resolutions.

Performance in Apex Legends is very competitive, but this title isn’t CPU limited, at least not with these GPUs using the maximum in-game quality settings. Both GPUs allowed for solid 144 Hz gaming at 1080p and even at 1440p you’re still looking at a high refresh rate experience.

Using our updated Cyberpunk 2077 benchmark pass we find close results in this highly demanding title. Please note ray tracing has not been enabled and we’re also not using the highest quality preset, instead, settling for the second-highest option.

At 1080p we see that the margin has decreased from 10% in favor of the Radeon GPU to just 6%, not a massive change but it’s certainly less favorable for AMD. The decline is largely due to the inclusion of titles such as PUBG, Days Gone, Flight Simulator 2020, Warhammer II, Biomutant, and F1 2021.

Then at 1440p the margin is even slimmer, coming from 5% in the original 6600 XT review to just 3% across the 30 game sample, which is basically a tie. The 6600 XT saw its most favorable results in Valorant, Borderlands 3, World War Z, Death Stranding and Assassin’s Creed Valhalla.

Overall the Radeon RX 6600 XT is the faster GPU, which we already knew from previous testing, but the margin is slimmer than first thought. The delta between the two GPUs will always depend on the games used for testing — or in your case, the games you actually care about. Ray tracing performance seems fairly even in the few titles we tested, though we’d say the RTX 3060 has better support right now overall.

The GeForce RTX 3060 also benefits from DLSS support, which is far more widespread than FSR, and in our opinion works much better at lower resolutions such as 1080p.

The Nvidia encoder, often referred to as Nvenc, is also commonly pushed as a big plus for GeForce graphics cards, but we’ve found little difference between ShadowPlay and ReLive for capturing gameplay lately. AMD’s solution appears to work very well now, so perhaps Nvenc is no longer a differentiating advantage anymore.

As for pricing and availability, that’s where the Radeon RX 6600 XT appears to offer the biggest advantage of all. To best illustrate that, here’s a few cost per frame graphs.

In the US, the situation is far less radical. Looking at eBay listings, the RTX 3060 is 19% more expensive. That still means that the RTX 3060 is 27% more costly per frame than the Radeon at 1080p and 22% at 1440p. Even over at Newegg the RTX 3060 will set you back 28% more per frame and with the 6600 XT you’re getting a MSI B550 Tomahawk motherboard included, so it makes much more sense for US shoppers to snap up that deal, rather than shop at eBay.

Bottom line, the Radeon RX 6600 XT currently offers gamers significantly more value than the GeForce RTX 3060, and therefore should be the go-to option for those looking this level of performance. Unless you play specific games that are favored by DLSS/RT enhancements, that’s our clear recommendation.

This situation is unlikely to change for Nvidia GPUs anytime soon after the company stated they expect supply issues for the RTX 3060 series to continue into September, so it’s unclear if supply will improve before the end of 2021. Mining has kept driving GPU prices higher, though of course, we’ll continue to monitor pricing and availability with monthly updates.