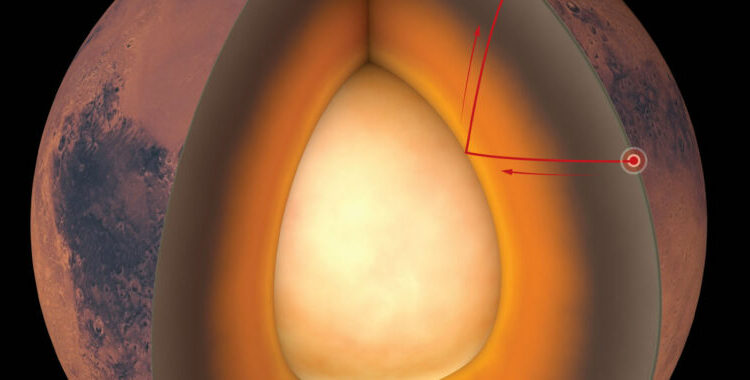 We’ve learned a lot about our planet’s interior simply by tracking how the seismic energy released by earthquakes moves through or reflects off the different layers present beneath Earth’s surface. For over a Martian year, we’ve had a seismograph on Mars in the hope that it would help us figure out the red planet’s interior.

But Mars is relatively quiet seismically, and we only have a single seismograph instead of an entire network. Still, with records of a handful of significant marsquakes, we now have some sense of what Mars’ interior looks like. And a set of new studies indicates that it’s pretty weird, with a large, light core and an unexpectedly warm crust.

Working out the structure of a planet involves reading seismic waves, which come in two categories: shear and compressional (S and P, in geological parlance). Depending on the location of the earthquake (or marsquake), the waves may arrive directly. But many others bounce off the surface of the planet before reaching the receiver, sometimes multiple times. So P waves will be followed by PP waves, and later by PPP waves. The US Geological Survey has a great diagram of the complexity this can produce, which we’ve included at right.

But that’s far from the end of the complications. The speed of the waves, and thus the time gaps between P and PP and PPP signals, will vary based on the material the waves are traveling through. The composition, density, and even temperature of the material can all make a difference in the speed at which seismic signals move through the planet. These properties often differ dramatically between specific layers of the planet, such as the solid crust and the semi-molten mantle. These differences will refract some of the seismic waves, bending their path through the planet’s interior. Other waves will reflect off the boundary between internal layers.

All of that makes reconstruction of the interior from seismic events complicated; there is generally more than one combination of properties like distance, materials, and temperatures that are compatible with the seismic signals produced by an event. On Earth, this isn’t a problem. We have a huge collection of seismographs that allows us to zero in on the most likely interpretation of the signals. And we have lots of individual events, and these allow us to identify the typical behavior of our planet’s interior.

On Mars, none of that is true. We have a grand total of one seismograph, and so even distance estimates are iffy at best. And we have very little sense of the internal temperature of the planet. There are points in reading the studies that almost feel like they’re mourning the absence of data from the failed attempt to have InSight take Mars’ internal temperature.

Mars also turns out to be very seismically quiet. There were no marsquakes with a magnitude above 4.0, and there weren’t many of any magnitude. All told, fewer than a dozen events stood out clearly from the background noise at InSight’s landing site. So, you should view the results in these papers as an initial model of Mars’ interior: they’re likely to be refined as more data comes in and may even be revised considerably.

We have a good sense of what the outermost Martian crust looks like, given that we’ve obtained plenty of meteorites that originated on Mars, studied it from orbit, and landed hardware on it. Based on seismic waves, however, one of those studies suggests that the outer crust only extends to about 10 km beneath the planet’s surface at the InSight landing site. But there’s a lower crust, which extends down the mantle, which this study suggests starts at about 50 km deep.

The things both these studies agree on is that the crust is warmer than expected. This implies that there are more radioactive elements present than we would have predicted based on what we know about the surface composition. Why that’s the case is unclear, and the amount of excess radioactivity also depends on the exact thickness of the crust. Again, having a measure of the heat flow through the crust, as was originally intended, could have made a big difference here.

The final paper goes deep and looks for the boundary between Mars’ mantle and its core. The result is a radius just north of 1,800 km. This is unexpectedly large: it’s over half the radius of the entire planet. One of the consequences of the large core is that, to be compatible with the planet’s overall density, the core has to be lighter than expected (it’s also liquid). That implies the presence of lighter elements. Sulfur is the most reasonable candidate, but Mars isn’t expected to have enough sulfur to account for it all. So carbon, oxygen, and nitrogen can probably be found in the core as well.

One consequence of this is that the pressures at the outer edge of the core will be lower, meaning that Mars couldn’t have formed a mineral that helps trap heat in the core like Earth. This may have caused the planet to lose the heat more rapidly that was left over from its formation.

InSight has seen its mission extended, so we’ll continue to get more data from future marsquakes. While the initial data is compatible with a variety of potential conditions—the error bars on the density, temperature, and thickness of various layers are large—further data should help narrow things down.

But the large, liquid core turns out to be rather unfortunate in terms of InSight’s landing location. The core itself casts a seismic “shadow” across Mars, blocking waves from marsquakes on the opposite side of the planet from the seismograph. The larger the core, the more of the planet that’s invisible to InSight. And, unfortunately, that shadow includes the Tharsis region, which contains Mars’ largest volcanoes and is thought to have been active relatively recently.

Not being able to “see” Tharsis means we’re likely to register fewer marsquakes in total. Still, as long as the hardware holds up, we’re likely to have a steadily growing collection of data that will gradually give us a clearer picture of the red planet’s composition and evolution—something that will help us understand planet formation both within and outside of our Solar System.

Six, including pilot, killed in crash of Alaska sightseeing plane

Zombies rise, terrorize a town in trailer for SyFy’s Day of the Dead series