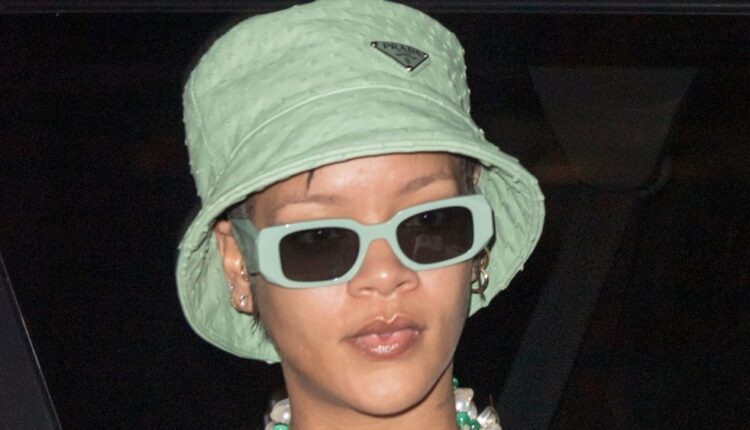 Bucket hats are back! And it’s become pretty clear that celebs have decided the ‘90s trend is going to be summer’s hottest accessory.

From Bella Hadid to Addison Rae, stars have proved that there’s always a time and a place to toss on the topper. Because whether they’re blocking out the sun’s rays during a pool day or hard-core committing to throwback style, bucket hats are pretty much all the rage these days.

Rihanna is a huge fan of the look. The 33-year-old Fenty Beauty founder has been petitioning for the return of the accessory for years, rocking the look to formal events and while running errands.

Recently, it’s become her go-to date night accessory. Not only did she sport a fuzzy pink option during a PDA-packed outing at Barcode in New York City with boyfriend ASAP Rocky, but she also debuted a mint green version while heading dinner with her beau on Wednesday, July 7.

For her date, she paired a $495 mint green Prada bucket hat with matching Prada sunglasses, jeans and a Cramps graphic t-shirt.

Another big fan of the trend? Lisa Rinna! The Real Housewives of Beverly Hills star has taken to the ‘gram wearing everything from linen options to go with her cheetah one-piece (we know she loves her animal print!) to a neon orange one she whipped out in a dancing video.

The trendy topper has also been a bonding point for her and her daughter Amelia Grey Hamlin’s boyfriend Scott Disick. In April, the reality star posted a picture of the bucket hat-clad Talentless founder, 38, walking on the beach with her daughter, 20.

“Welp we both seem to share a love of bucket hats,” she teased, marking her first comment on the couple’s relationship.

Disick’s ex, Kourtney Kardashian, is also a big fan of the look. Over fourth of July weekend, she took to Instagram to share a photo in a patterned bikini and matching, paisley-print bucket hat.

We of course have to give a shout out to Hailey Bieber, the street style queen. She’s rocked a handful of ‘90s trends over the past few months, from butterfly clips to space buns.

One of our favorite looks though was a black Jacquemus bucket hat she paired with a ribbed mini dress.

For more bucket hat inspo from stylish stars, keep scrolling. Because we’re rounding up the best looks, below!