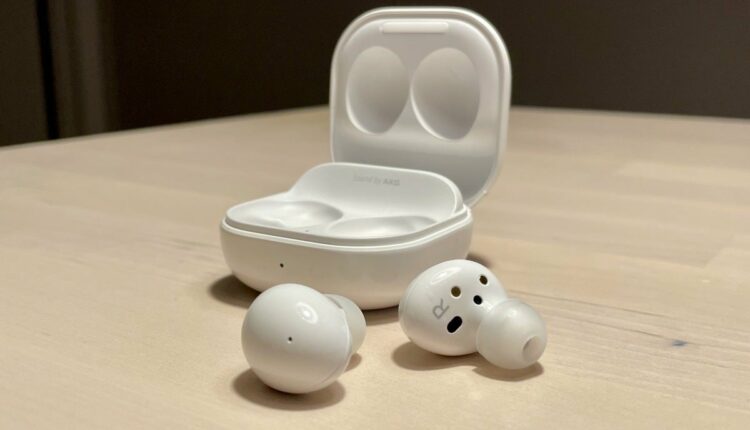 Samsung took the wraps off its long-rumored update to the original Galaxy Buds at its virtual Unpacked event Wednesday, and as expected, the Galaxy Buds2 now feature active noise cancellation, a new design, and improved water resistance.

Available now for preorder with an August 27 ship date, the $150 Galaxy Buds2 come in four colors—graphite, white, olive, and lavender—along with a case that supports Qi wireless charging.

I’ve been listening to a pair of the Galaxy Buds2 for about a day, and I’ll be writing a full review once I’ve spent more time with the earphones. So far, however, I’ve liked what I’ve heard, particularly given the price range.

Equipped with two drivers in each earpiece (my pre-brief materials didn’t contain driver details, but early leaks indicated a 6.5mm tweeter and an 11mm woofer), the Galaxy Buds2 add a feature that was sorely missing in the two-year-old original: active noise cancelling, which Samsing says is capable of cutting out up to 98 percent of background noise.

As with the noise cancelling on most earphones, the ANC on the Galaxy Buds2 is more effective with lower-end sounds than high-pitched ones; for example, the buds did a nice job of screening out the low rumble of my office fan, but I could still hear the clickity-clack of my mechanical keyboard. It’s also worth noting that ANC on the Buds2 is an on-or-off proposition, versus the two-step variety available on the $200 (list price) Galaxy Buds Pro, which we’ve reviewed.

Besides active noise cancellation, the Galaxy Buds2 feature a three-step ambient sound mode that lets in the sounds of your surroundings, similar to “transparency” mode on Apple’s Airpods Pro. You can toggle between ANC and the ambient noise mode by either touching and holding one of the earbuds (you can specify whether only one or both the earbuds respond to that gesture, or you can assign another function altogether) or by using the Samsung Wear app. That said, the clever “voice detect” feature from the Galaxy Buds Pro, which automatically turns the mode on whenever you start talking, is absent from the Buds2.

As far as design goes, the Galaxy Buds2 has a glossy, more rounded look than its predecessor, while its water resistance has been upgraded to IPX7, which means the earphones can be submerged in a meter of water for up to 30 minutes (you can read all about IP codes in this other story). The older Galaxy Buds (as well as the Buds Plus and Buds Live) only have an IPX2 rating, good for resistance to water that hits them at a 15-degree angle or less.

The Galaxy Buds2 come with three sets of eartips—small, medium, and large—while a new “Earbud fit test” on the Samsung Wear app conducts a brief test to make sure the ear tips fit properly. (The AirPods Pro come with a similar test.)

Samsung promises up to five hours of battery life from the Galaxy Buds2 with noise cancellation enabled, or up to 7.5 hours with ANC switched off. The charging case (which itself can be charged via Qi wireless charging or with the included USB-C to USB-A cable) boosts those battery life estimates to 20 or 29 hours, respectively.

I can’t render a fair verdict on the Galaxy Buds2 audio quality given that I’ve only been listening to them for a few hours, but so far, so good. I’ve been enjoying the atmospherics and clarity of Vlado Perlemuter’s rendition of Ravel’s solo piano works for Nimbus Records, as well as the surprisingly deep bass on Telarc’s recording of George Geshwin’s “An American in Paris” from conductor Erich Kunzel. Led Zeppelin’s “Kashmir” on the Buds2 sounded crisp, punchy and spacious, while the earbuds delivered intact the deep, textured, and synthesized growl that opens Taylor Swift’s “Ready for It?” on Reputation. For a $150 pair of earphones, I’ve been pretty impressed so far.

That said, I still have plenty of Galaxy Buds2 testing ahead, so stay tuned for my full review.