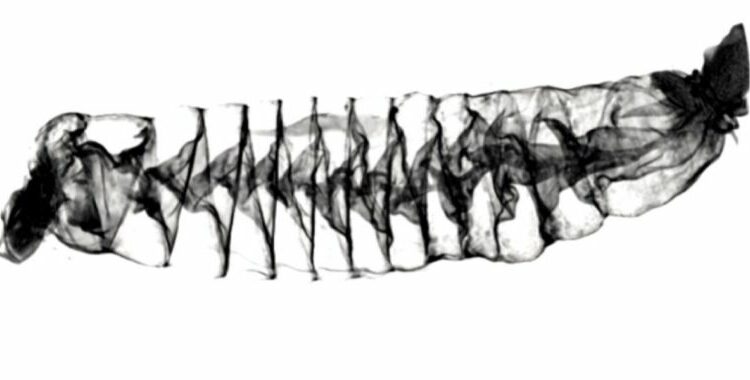 In 1920, Serbian-born inventor Nikola Tesla designed and patented what he called a “valvular conduit”: a pipe whose internal design ensures that a fluid will flow in one preferred direction, with no need for moving parts, making it ideal for microfluidics applications, among other uses. According to a recent paper published in the Proceedings of the Royal Society B, the Tesla valve also provides a useful model for how food moves through the digestive system of many species of shark. Based on new CT scans of shark intestines, scientists have concluded that the intestines are naturally occurring Tesla valves.

“It’s high time that some modern technology was used to look at these really amazing spiral intestines of sharks,” said co-author Samantha Leigh of California State University, Dominguez Hills. “We developed a new method to digitally scan these tissues and now can look at the soft tissues in such great detail without having to slice into them.”

The key to Tesla’s ingenious valve design is a set of interconnected, asymmetric, tear-shaped loops. In his patent application, Tesla described this series of 11 flow-control segments as being made of “enlargements, recessions, projections, baffles, or buckets which, while offering virtually no resistant to the passage of fluid in one direction, other than surface friction, constitute an almost impassable barrier to its flow in the opposite direction.” And because it achieves this with no moving parts, a Tesla valve is much more resistant to the wear and tear of frequent operation.

Tesla claimed that water would flow through his valve 200 times slower in one direction than another, which may have been an exaggeration. A team of scientists at New York University built a working Tesla valve in 2021, in accordance with the inventor’s design, and tested that claim by measuring the flow of water through the valve in both directions at various pressures. The scientists found the water only flowed about two times slower in the nonpreferred direction.

However, flow rate proved to be a critical factor. The valve offered very little resistance at slow flow rates, but once that rate increased above a certain threshold, the valve’s resistance would increase as well, generating turbulent flows in the reverse direction, thereby “plugging” the pipe with vortices and disruptive currents. So it actually works more like a switch, according to co-author Leif Ristroph, and can also help smooth out pulsing flows, akin to how AC/DC converters turn alternating currents into direct currents. In fact, Ristroph suggested that this may have been Tesla’s intent in designing the valve, given that his biggest claim to fame is inventing both the AC motor and an AC/DC converter.

Sharks are apex predators, feeding on a wide range of species, and are thus important for controlling biodiversity in the larger ecosystem. Most sharks have spiral intestines consisting of a varying number of folds in the intestinal tissue, typically in one of four basic configurations: columnar, scroll, a funnel pointing to the posterior, or a funnel pointing to the anterior. These four types of intestines are usually depicted in 2D sketches that are splayed out in two dimensions after a dissection or imaged as two-dimensional slices through the three-dimensional structure. But that doesn’t give scientists much insight into how the structure works in situ.

Last year, Japanese researchers reconstructed micrographs of histological sections from a species of catshark into a three-dimensional model, offering “a tantalizing glimpse of the anatomy of a scroll-type spiral intestine,” per the authors of this latest paper. Co-author Adam Summers, of the University of Washington’s Friday Harbor Labs, and his colleagues decided that CT scanning might accomplish something similar, since the technique involves taking a series of X-ray images from different angles and then combining them into 3D images.

“CT scanning is one of the only ways to understand the shape of shark intestines in three dimensions,” said Summers. “Intestines are so complex, with so many overlapping layers, that dissection destroys the context and connectivity of the tissue. It would be like trying to understand what was reported in a newspaper by taking scissors to a rolled-up copy. The story just won’t hang together.”

Summers et al. acquired intestines from preserved shark specimens representing 22 species from the Los Angeles Natural History Museum and from previously frozen donated shark specimens. The intestines were removed via dissection, then flushed out with deionized water so they were free of any residual contents. Next, the team filled the specimens with fluid and freeze-dried them to retain their shapes, before scanning them to produce virtual 3D models. This gave the researchers an excellent view of how the intestines are structured.

Next, the team took unfrozen samples of each of the four types of intestines and conducted several experiments. For instance, the researchers ran liquids through the spirals and found it typically took around 35 minutes for the liquids to pass through when they followed the normal direction of flow. But the process took twice as long when the intestines were turned upside down, in the opposite direction of normal flow. This is in keeping with the findings of last year’s NYU experiments with a Tesla valve.

The team also conducted experiments with five recently euthanized Pacific spiny dogfish. The researchers ran colored liquids of varying viscosities through the spiral intestines and observed how the spiral muscles reacted to the liquid. The intestines appeared to slow the movement of food, directing it down through the gut via gravity and contractions of the smooth muscle of the gut. However, those contractions mostly served to mix and churn whatever fluids pass through; the intestine’s unusual structure is sufficient to move everything along.

As for why this peculiar intestinal structure may have evolved in the first place, sharks can go days or weeks between large meals. The authors hypothesize that the unusual spiral structure provides an expanded surface area and volume, thereby prolonging the time that food remains in the gut. This increases the absorption of nutrients and also reduces how much energy is needed for sharks to digest their food.

The next step is to create 3D-printed models of the different types of shark intestine and run similar experiments. “The vast majority of shark species, and the majority of their physiology, are completely unknown,” Summers said. “Every single natural history observation, internal visualization, and anatomical investigation shows us things we could not have guessed at. We need to look harder at sharks and, in particular, we need to look harder at parts other than the jaws, and the species that don’t interact with people.”

Chia miners selling off storage devices due to XCH bear…