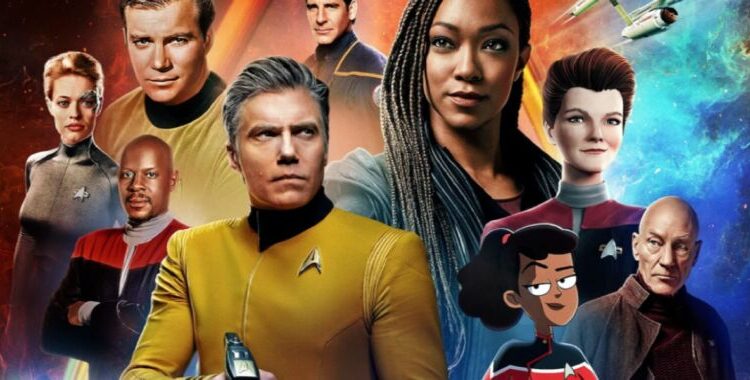 It’s been 55 years since the television debut of Star Trek: The Original Series (TOS), and the franchise continues to expand its reach in film and television, bringing delight to new generations of fans. Paramount+ marked the occasion with Star Trek Day 2021, a live-streamed event staged (and taped for posterity) at the Skirball Cultural Center in Los Angeles.

The event also marked the launch of a month-long “Boldly Go” campaign in honor of Star Trek creator Gene Roddenberry. Fans worldwide are invited to submit photos and videos about their hopes for the next 100 years. The Roddenberry Foundation will work with its campaign partners to combine the submissions into a piece of artwork that will eventually be auctioned off, with the proceeds going to support various nonprofits. The artwork will also be etched onto a network of satellites slated to be launched in 2022—”a first-of-its-kind space-based art installation.”

The campaign is about inspiring hope and creating an opportunity for people to participate in building a better future. We want to acknowledge and in a way thank the fans for their role in keeping Star Trek and my dad’s legacy relevant. And we want to remind ourselves that we can make a difference, that together we can ensure that the values that fuel Star Trek—diversity, inclusion, and progress—are worthy and achievable. My dad would have loved the idea of combining philanthropy and fan participation into real-world impact.

And of course, the panels provided the perfect opportunity to debut lots of teasers, trailers, and other newsy nuggets for the growing Star Trek streaming television franchises.

The second season of Picard won’t be released on Paramount+ until next February, but a tantalizing teaser dropped in June, giving us our first look at the return of fan-favorite Q (John de Lancie), an extradimensional being with power over time, space, the laws of physics, and reality itself.

We saw Picard (Sir Patrick Stewart) returning to his family vineyard, calling for Laris (Orla Brady), who strangely wasn’t there. Then Q enters, commenting that Picard looks “a bit older than imagined” (as does Q himself). The teaser was brief, but it was clear that Q had done something to the timeline. We got glimpses of all the changes that have come as a result. We saw Elnor and Raffi fleeing for their lives, Soji dressed all in white and looking very VIP, Rios in a snazzy new Federation uniform with new insignia, and Agnes Jurati in civilian garb. Most shocking of all: Seven of Nine wakes up in an unfamiliar apartment to find her Borg implant is gone.

This new trailer fleshes out those initial brief glimpses to give us a better sense of what’s going on. Q’s time-tampering mischief has created an alternate reality where Earth in the 24th century is essentially a totalitarian state. Picard and the crew of La Sirena go back in time to the 21st century to set things right again. Yep, that’s the Borg Queen (Annie Wersching) making an ominous appearance. We can also expect a bit of humor to lighten up the drama and high cosmic stakes—check out Seven of Nine (Jeri Ryan) driving a stolen police car as if she were recreating the famous French Connection car chase scene. It feels a bit like a cross between Star Trek: The Voyage Home and Back to the Future II.

The second season of Picard is slated to debut on Paramount+ in February 2022. Stewart announced during his panel appearance that the show has already been renewed for a third season.

We’re big fans of the animated series Star Trek: Lower Decks (it was one of our favorite TV shows of 2020), so we were intrigued by the first teaser for another new animated series, Star Trek: Prodigy, which debuted during the Star Trek Universe panel at [email protected] 2021 in July. Prodigy will be a very different beast from Lower Decks, as it is aimed at a younger audience. It’s set in 2383 and takes place after the events of Star Trek: Voyager.

The show is different from Lower Decks in both tone and visual style, as the first teaser showed. Specifically, the animation will be computer-generated and feature a more cinematic style. Producer Alex Kurtzman likened the look to Netflix’s Emmy-nominated animated sci-fi anthology series Love, Death and Robots, as well as Ninjago and Trollhunters, the latter two both written by Prodigy creators Kevin and Dan Hageman. (Rod Roddenberry is also a member of the writing team.)

The plot involves a “motley crew of young aliens in the Delta Quadrant” who stumble upon the USS Protostar, an abandoned Starfleet ship, and decide it’s the perfect vessel to get them to the Alpha Quadrant. Kate Mulgrew will return to voice Captain Kathryn Janeway—or rather, she will appear as the ship’s Emergency Training Hologram, who must teach the crew how to navigate the ship through the vastness of space. From the start, Kurtzman vowed to only bring back “legacy characters” for very specific reasons; apparently, Mulgrew’s Janeway met his criteria. So did Billy Campbell, who will be reprising his role as rogue freighter captain Thadium Okona from Star Trek: The Next Generation.

Rounding out the cast are Brett Gray as Dal, described as a “teen maverick with a lot of hope”; Angus Imrie as Zero, a non-corporeal, energy-based lifeform called a Medusan; Ella Purnell as Gwyn, a Vaunt N’Akat who grew up on a mining planet; Jason Mantzoukas as Jankom Pog, a Tellarite who likes to play devil’s advocate; Rylee Alazraqui as Rok-Tahk, an animal-loving eight-year-old; Dee Bradley Baker as an indestructible blob named Murf who enjoys chomping on ship parts; John Noble as Gwyn’s tyrannical father, the Diviner; and Jimmi Simpson as Drednok, a robotic enforcer who works for the Diviner.

Speaking of Lower Decks, we also got a mid-season trailer for that show’s second season. Ars Senior Technology Reporter Andrew Cunningham reviewed the first half of S2 last month, saying that the series “is still giving me pretty much exactly what I want from Star Trek: episodic fun where the very fabric of the world/the Federation/the universe/reality as we know it is almost never in mortal peril.” He added, “Lower Decks never asks me to feel feelings I don’t feel about one-note, tropey characters I just met, and it’s refreshingly light on mysterious people with troubled pasts and unknown allegiances.”

Yep, that about sums up what we love best about the series. And it looks like we’ll be getting more of the same in the second half of the season, including the appearance of a Borg cube, complete with a Borg uttering the famous line “You will be assimilated.” The second season of Star Trek: Lower Decks is currently airing on Paramount+.

One of the highlights of Star Trek: Discovery‘s second season was the appearance of classic TOS characters Captain Christopher Pike (Anson Mount), Number One (Rebecca Romijn), and Spock (Ethan Peck). The actors will reprise their roles in the new spinoff series Star Trek: Strange New Worlds, created by Kurtzman, Akiva Goldsman, and Jenny Lumet. It’s a prequel to TOS, as Pike and his crew navigate the USS Enterprise through the galaxy, exploring new worlds along the way.

As for Discovery, we didn’t get any new teasers for the upcoming fourth season—apart from a brief clip introduced by a virtual Sonequa Martin-Green—but we did get a premiere date announcement: November 18, 2021. In the S3 season finale, planets were beginning to rejoin the Federation, and Discovery set out to bring dilithium from the nebula to planets that have been cut off by the Burn, presumably bringing the warp drive back and enabling travel between distant worlds once again.

What can we expect from S4? Per the (deliberately vague) description, the season “finds Captain Burnham and the crew of the USS Discovery facing a threat unlike any they’ve ever encountered. With Federation and non-Federation worlds alike feeling the impact, they must confront the unknown and work together to ensure a hopeful future for all.”

Star Trek has always had one of the most passionate and loyal science fiction fandoms, and it offers fans a large global community with which to share their love (and the occasional grievance) and nerd-gas over tiny details. What’s less talked about is the tight-knit community that has grown up around the cast members of the various films and TV series over the decades. That sense of community was readily apparent during the red carpet appearances before the official event, which featured writers and cast members of TOS, The Next Generation, Voyager, Deep Space Nine, Enterprise, Picard, Discovery, Lower Decks, Strange New Worlds, and Prodigy all laughing and mingling like they were at one big multi-generational class reunion.

May there be many more new family members to come.