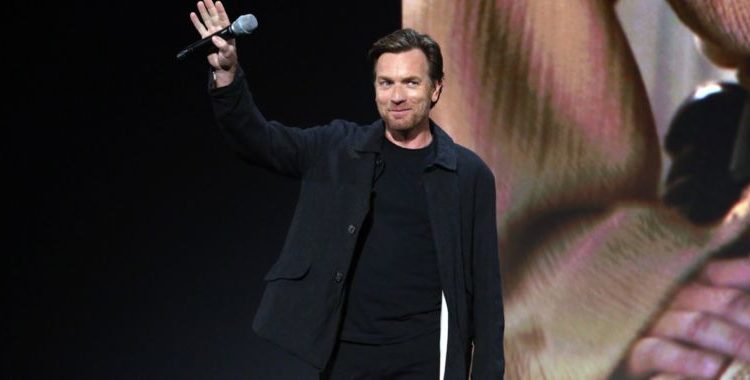 Plus first trailers for What If…? and The Mandalorian; more new series under way.

Enlarge / Ewan McGregor made a surprise appearance at Disney’s D23 Expo yesterday to announce he will star in an as-yet-untitled Obi-Wan Kenobi spin-off series. It will stream exclusively on Disney+, which launches November 12.

The rumors were true: there will indeed be a Star Wars spinoff series featuring Obi-Wan Kenobi, and none other than Ewan McGregor will be reprising his role as the iconic character. The actor (and Officer of the British Empire) made a surprise appearance last night at the tail-end of a showcase presentation at D23 Expo 2019, Disney’s annual fan extravaganza. The series is still in the earliest stages of development, but will air on Disney+, the studio’s new streaming service scheduled to launch in November. The showcase also featured several other notable projects Star Wars and Marvel fans in particular can expect to debut over the next two years.
Star Wars: The Mandalorian
The other major announcement during the Star Wars portion of the showcase was the premiere of the first official trailer for the spinoff series, The Mandalorian. Starring Pedro Pascal, the series takes place a few years “after the fall of the Empire and before the emergence of the First Order,'” according to the official synopsis. Pascal’s bounty hunter is “a lone gunfighter in the outer reaches of the galaxy, far from the authority of the New Republic.”
Enlarge / On display: costumes for The Mandalorian, for stars Pedro Pascal and Gina Carano.Jennifer Ouellette
Disney+ is also developed a Star Wars spinoff (“Untitled Spy Series”) featuring Rogue One’s Cassian (Diego Luna) and his best droid buddy, K2 (Alan Tudyk). Both actors made a brief appearance during the announcement. Although there’s no title yet, Tudyk quipped he though it could be called K2 Fast K2 Furious. Or possibly the Untold Cassian Untitled Story. In addition, there will be a return of the hugely popular animated series, The Clone Wars, in February 2020.
Marvel
What If…?
Marvel Studios President Kevin Feige introduced a slew of new original programming for Disney+, kicking off with an animated series called What If…? The basic concept is to reimagine all 23 films in the MCU universe with key plot twists changed—further building on the MCU-is-a-multiverse concept. If you change one small element, how does that change the way events unfold in an alternate universe? Some highlights from the short exclusive clip Feige played during the showcase: a black Star Lord, a zombie Captain America, and—in a snippet that received raucous cheers from fans—Peggy Carter gets the super soldier serum instead of Steve Rogers and proceeds to kick butt as Captain Carter.
Enlarge / President of Marvel Studios Kevin Feige showed a trailer for the upcoming new animated series What If…? at Disney’s D23 EXPO 2019.Jesse Grant/Getty Images for Disney
WandaVision et al.
Possibly the strangest spinoff series under development is WandaVision, which sees the Scarlet Witch (Elizabeth Olsen) and Vision (Paul Bettany) living in a kind of dystopian suburban hell. At least that seems to be the tone of the series, based on the teaser Feige screened during the showcase. Lacking any actual footage, the teaser was just snippets of The Dick van Dyke Show interspersed with snips of the Scarlet Witch and Vision from the various MCU films. It’s meant to be a kind of sitcom/epic superhero mashup, with Kat Dennings reprising her role as Darcy from the Thor films, alongside Randall Park reprising his Ant Man and the Wasp role. I am a bit skeptical. We won’t find out whether or not the writing team can pull it off until spring 2021.
There’s also The Falcon and the Winter Soldier, slated to air sometime in late 2020, starring Anthony Mackie and Sebastian Stan, both of whom made brief appearances during the showcase. Several other projects in development received passing namechecks, namely Loki, with Tom Hiddleston reprising his MCU role (he gave pre-taped remarks to the assembled fans), which is slated for early 2021 and will pick up the god of mischief’s story where Avengers: Endgame left off. Hawkeye should debut in late 2021.
Enlarge / D3 Expo 2019, Disney’s annual showcase of all things Disney, Pixar, Marvel, Star Wars, and now also National Geographic takes place this weekend in Anaheim, Calif.Jennifer Ouellette
Feige mentioned three other new series in the earliest stages of development for Disney+. Ms. Marvel will be a live-action series based on the Hugo-Award-winning comic of the same name. The Hollywood Reporter leaked the news just before the showcase announcement, noting:
The latest incarnation… is a teenager named Kamala Khan. Khan broke ground by becoming Marvel’s first Muslim character to lead her own comics title. Her identity as a Pakistani-American living in a religious family in New Jersey whilst trying to find her own way has been a major focus of the stories. Her powers have been described as polymorphous, meaning she has the ability to stretch and change her shape.
Ms. Marvel may even find her way into future MCU movies, per Feige. Less well-known to broader audiences is Moon Knight, aka Marc Spector, a former CIA agent turned mercenary. When he is nearly killed by a terrorist, the Moon God Khonsu saves his life, and Spector becomes Moon Knight. He also shows signs of multiple personalities, leading to questions about his sanity. Finally, there will be She-Hulk, aka Jennifer Walters, the lawyer cousin of Bruce Banner. She gets her own Hulk-like abilities after getting an emergency blood transfusion to treat a traumatic injury.
Honestly, the Stars Wars and Marvel franchises alone are probably sufficient to guarantee a healthy subscriber base for the fledgling streaming service for years to come. But Disney+ will also be the exclusive home for all its classic animated films; the growing stable of live-action reboots—there’s a trailer now for Lady and the Tramp; a new Phineas and Ferb movie; an entire slate of fare for children and young adults (including a Lizzie McGuire revival with original star Hillary Duff portraying a grown-up version of the character); plus some documentary-style and unscripted fare—most notably The World According to Jeff Goldblum. That’s a slate of programming to be reckoned with, although I don’t see it displacing the Netflix streaming giant entirely any time soon.

Ashes 2019: England’s Joe Denly and Joe Root ensure Australia are made to work for their prize