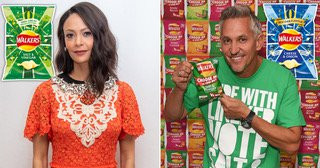 It’s the riddle that drives us all mad – did Walkers actually switch the colours of their salt and vinegar and cheese and onion packets without telling us?

The crisp brand says no, but the people will never let the mystery go.

Thandiwe Newton has revived the debate and demanded that some consistency be applied to the colour of crisp packets – and not the way the status quo currently has forced on us.

The Westworld star took to Twitter to demand action on this crucial issue, writing: ‘Someone needs to make a freakin’ decision and it’s going to be me. Salt ‘n Vinegar is BLUE,  and Cheese and Onion is GREEN. Ok? Enough with this foolishness.’

Fans were on Thandiwe’s side, tweeting: ‘The queen has spoken’ and ‘Finally’.

Walkers – who put their cheese and onion in blue bags, and salt and vinegar in green – weren’t as impressed, though, replying: ‘Thandiwe you are of course entitled to your opinion, even an entirely wrong one like this.’

They also brushed off reminders that their Squares crisps are actually in the opposite bags, writing: ‘That’s the exception that proves the rule, obviously.’

Gary Lineker, the face of Walkers, then got involved to suggest that he was on Thandiwe’s side.

Quote-tweeting the actress’s post, the Match of the Day host wrote: ‘I always thought that was the case. That’s how I remembered them, but after years of investigation it appears this may well be an urban myth.’

Walkers responded: ‘An urban myth that makes a daily appearance in our mentions, believe me.’

Many people believe that Walkers did actually package their cheese and onion in green packs, and their salt and vinegar in blue, before making the switch some time in the 1990s.

However, Walkers maintain that this never happened, and that cheese and onion has always been green and salt and vinegar have always been blue.

The perceived switch was investigated on the podcast The Walkers Switch, with Lauren Peters and Augustine Cerf speaking to people who specifically remember ad campaigns announcing the colour switch, and even speaking to Gary, who is also convinced that the swap happened.

Walkers truthers think that the company is lying, while others believe that it is an example of the Mandela Effect – collective false memories, or a phenomenon which occurs when a large group of people believe an event occurred when it did not.

It is named after people remembering that Nelson Mandela died in prison in the 1980s, despite him  being released from prison and dying in 2013.

Others believe that people are getting confused between Golden Wonder and Walkers, but whatever the reason, the problem still exists – how is anybody supposed to know what brand keeps what crisps in what coloured bag?

Thandiwe and Gary – the nation needs you.


MORE : Alex Scott confirmed as first permanent female host of Football Focus as she takes over from Dan Walker