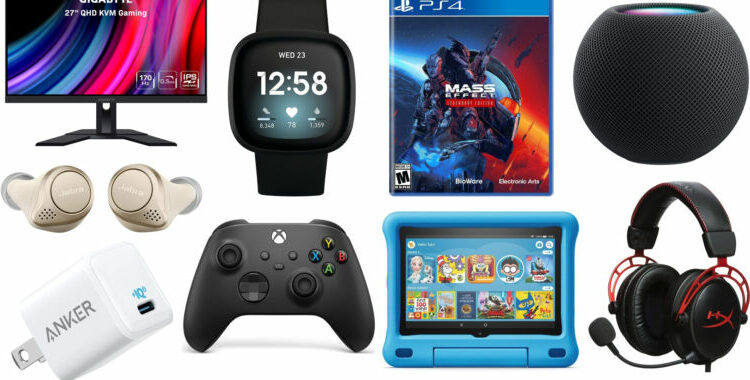 This weekend’s edition of the Dealmaster includes the first major deal we’ve seen on the recently released Mass Effect: Legendary Edition; a good price drop on Jabra’s Elite 75t, one of our favorite pairs of true wireless earbuds; and a sweeping sale on Amazon’s Fire HD Kids tablets, among many other good prices on gadgets and gear. You can find our full curated roundup below.

Note: Ars Technica may earn compensation for sales from links on this post through affiliate programs.

Featured deals of the day

Mass Effect: Legendary Edition (PS4, Xbox) for $44.99 at Amazon and Best Buy (normally $60): This is the first significant discount we’ve seen for Mass Effect: Legendary Edition, a remastered collection of the beloved trilogy of Mass Effect action-RPGs. (Here’s not looking at you, Mass Effect: Andromeda.) We went hands-on with the collection when it launched in May and found it to be a “mostly great” set of touch-ups, with 2007’s original Mass Effect game getting the most significant improvements. This deal only applies to the PS4 and Xbox versions, but it’s worth noting that publisher EA is not selling editions specifically made for the newer PlayStation 5 and Xbox Series X/S consoles.

Anker PowerPort III Nano 20 W USB-C wall charger for $13.59 at Amazon (use code: SDAK4TPCL—normally $17): A recommendation from our guide to the best iPhone 12 accessories, Anker’s PowerPort III Nano is small enough to fit in a men’s pants pocket and packs a 20 W charge that’s strong enough to charge Apple’s latest iPhone at full speed. It doesn’t come with a USB-C-to-Lightning cable required to reach those speeds, its prongs don’t fold, and it doesn’t utilize the common USB-C Power Delivery standard. But we’ve found it to be reliable in long-term testing, and if you need a spare for your phone specifically, it undercuts Apple’s competing fast charger on price. This deal is less than $2 higher than the lowest price we’ve tracked. A two-pack is also on sale for $25 if you want more than one.

Amazon Fire HD 10 Kids (32GB) 10.1-inch tablet for $129.99 at Amazon and Target (normally $200): As we noted in our most recent Dealmaster, Amazon’s Fire HD Kids tablets are one of the few child-focused tablets that are actually worth recommending. They can’t touch Apple’s iPad from a speed and build-quality standpoint, but they perform well enough for basic media purposes (if not gaming), and they come with two-year warranties, big bumper cases to protect against drops, fairly extensive parental control options, and a year’s subscription to Amazon’s Kids+ service, which includes a variety of child-friendly entertainment content. This is the first discount we’ve seen for the new Fire HD 10 Kids slate, and it comes as part of a wider sale on Amazon’s entire Kids tablet lineup.

Microsoft Xbox Wireless Controller (Carbon Black) for Xbox, PC, iOS, and Android for $49.99 at Microsoft, Amazon, Best Buy, and GameStop (normally $55): Microsoft’s latest Xbox controller doesn’t have the fancy haptic feedback or adaptive triggers of Sony’s DualSense pad—though future revisions may change that—but it still offers a comfortable and sturdy design that works across Xbox consoles, PCs, and mobile devices with minimal fuss. Compared to the older Xbox One gamepad, it now includes a dedicated button for screenshots and video recordings, a slightly improved d-pad, and a pleasing textured finish on the back. We’ve seen it drop as low as $39 in the past, but this deal is still $10 off Microsoft’s usual MSRP. Just remember that it runs off AA batteries by default, not a rechargeable unit.

Jabra Elite 75t (Gold Beige) true wireless noise-canceling earbuds for $112.99 at Amazon and Best Buy (normally $135): Jabra’s Elite 75t remains one of our favorite sets of totally wireless earbuds thanks to its lightweight and comfortable design, useful active noise-canceling mode, decent mic quality for calls, and solid seven or so hours of battery life. While its sound quality is deeply bass-heavy by default, those who prefer that kind of signature may enjoy it, and the whole profile can always be customized through an EQ tool in Jabra’s companion app. IP55-rated water resistance and a relatively simple one-button control scheme on each earbud help as well. We saw the Elite 75t drop to $95 during Amazon Prime Day last month, but this deal is among the better prices we’ve tracked outside of that. Just note that the discount only applies to the beige model as of this writing.

Apple Siri Remote (2nd gen) for Apple TV 4K and Apple TV HD for $49.97 at Verizon (normally $59): This deal matches the best price we’ve seen on Apple’s newly updated Siri Remote for the Apple TV, which replaces the original clicker’s controversial design—to put it mildly—with one less reliant on touch inputs. Instead, it mainly uses a five-way clickpad/touchpad, with more clicky buttons, dedicated power, mute, and Siri buttons and a generally thicker design on top of that. It works with both generations of the Apple TV 4K as well as the 1080p Apple TV HD.

Gus Grissom taught NASA a hard lesson: “You can hurt yourself in the ocean”