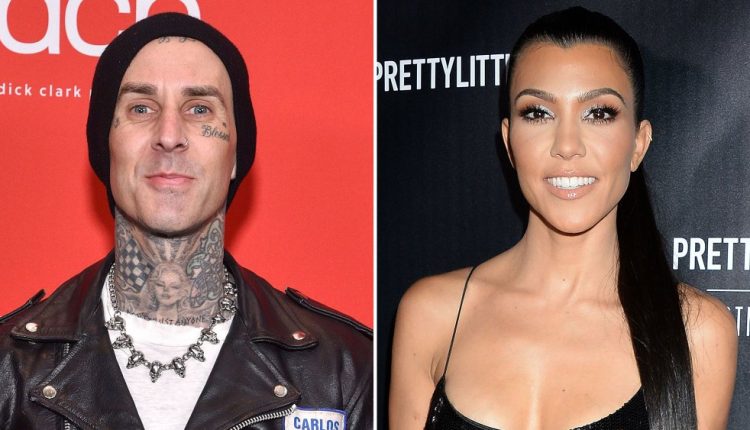 “I F—KING LOVE YOU! 🖤,” the Blink-182 drummer, 45, wrote via Instagram on Sunday, April 18. “YOU’RE A BLESSING TO THIS WORLD HAPPY BIRTHDAY @kourtneykardash.”

Barker’s message was paired with a gallery of images showing the pair engaging in various forms of intimacy. They hugged, they kissed, they held hands and — in the final video — the Poosh owner, 42, sucked on her boyfriend’s thumb before breaking out in laughter.

“Travis!” she said in the video, giggling.

The birthday girl’s friends and family were quick to comment on the couple’s obvious connection.

Us Weekly confirmed the rocker and the Kourtney and Kim Take Miami star’s romance in January.

“Kourtney and Travis are officially a couple,” a source told Us at the time. “They have been close friends for years and have been dating for a couple months. Travis is very smitten with Kourtney and has been for a while.”

To celebrate his girlfriend’s birthday, the record producer arranged a giant display of tulips and gardenias to take over her foyer on Saturday, April 17. He also treated her to dessert — a bowl of gelato that he posted to his Instagram Story.

The “All the Small Things” musician has never been one to shy away from publicly declaring his attraction to his girlfriend.

On April 10, Barker tagged the Keeping Up With the Kardashians star in an Instagram post with the caption, “All day I dream about sex w/ you.”

Though Travis’s tribute was something special, more of Kourtney’s loved ones took to social media to celebrate the businesswoman on her special day.

“Happy birthday 2 the best mom a child could ask for and some more!” the Talentless designer, 37, wrote alongside a pair of his family. The reality TV stars dated on and off from 2009 to 2015 and share three children: Mason, 11, Penelope, 8, and Reign, 6.

Disick has also moved on since their relationship ended and is currently dating Amelia Gray Hamlin.

A source told Us on April 11 that the model, 19, is “not bothered” by her boyfriend’s relationship with his children’s mother.

Scroll to see Barker’s PDA-filled birthday wishes for his girlfriend: