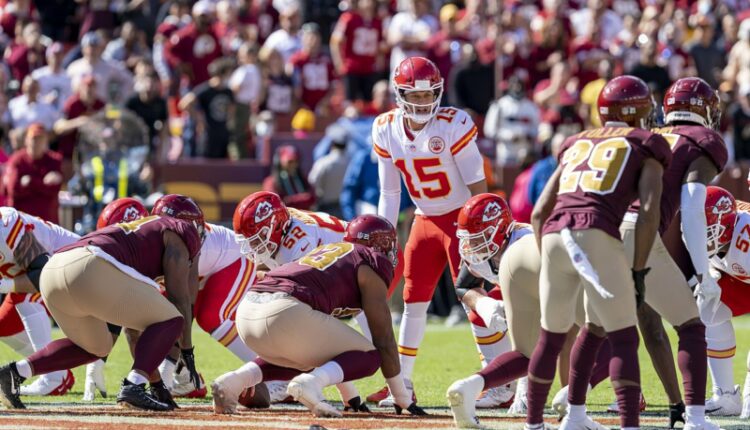 The NFL season has just kicked off again and here we take a look at who could go all the way to Super Bowl glory.

Here we unpick the teams who will all think they’ve got a realistic chance of going all the way; below we look at the 15 teams leading the betting odds ranked in order of favourites to least favourites. Beyond those 15, the others are what we’d call “no hopers”.

We start off with the Super Bowl favourites, the Buffalo Bills. The Bills are head and shoulders clear of their AFC East rivals in the divisional betting and it’s clear to see why.

Had lady luck smiled on them a little more they might have gone all the way last season and they arrive in this game as a stronger team than last. Josh Allen is absolute flames, Stefon Diggs isn’t far behind and the addition of Von Miller adds loads to an already loaded roster.

With Patrick Mahomes on their side, the Chiefs are always going to be spoken about as a potential Super Bowl winner – and we’re inclined to agree that they could deliver. That said, they’ve made some bold decisions this offseason with Tyreek Hill and Tyrann Mathieu heading through the exit doors.

That pours a lot of pressure on the likes of Juju Smith-Schuster and Justin Reid. They’ll be good players for the Chiefs, they’ll look class in games but can they hit it off consistently? That will define how accurate the bookies odds are.

Tampa Bay dominated headlines this offseason – or more to the point, Tom Brady did. Brady announced his retirement and then u-turned to send NFL fans wild. We don’t need to say much about Brady but with the legend on the roster, you know their eyes will be on the biggest prize with Todd Bowles having already confirmed as much.

Around Brady, though there are a few question marks with injuries alongside Alex Cappa leaving and Ali Marpet actually calling time on his career.

The Chargers have worked their way into the Super Bowl conversation for three key reasons. Justin Herbert is the real deal at quarterback; he threw over 5,000 passing yards last season and has started the new campaign like a house on fire.

Throw in Zion Johnson, who the Chargers took as the number 17 overall pick, and a number of defensive reinforcements and all of a sudden trips to LA will be anything but straightforward. Those moves aside it’s been a period of stability for the Chargers and that might even see them usurp the Chiefs in the AFC West.

The Packers are the bookies favourites to win the NFC North but it’s far from a slam dunk owing to the strength of the division. That said, a wildcard spot is the very least they’ll be expecting and from there, anything could happen.

Matt LaFleur is a well-established voice in the dressing room now and that consistency shouldn’t be underrated. Additions like Jarran Reed immediately improve the team whilst AJ Dillon and Aaron Jones are capable of ripping things up. Throw in Aaron Rodgers, who was named MVP for the second year running last year, and why can’t the Packers go all the way?

We’ve already looked at one side from LA in the Chargers and the Rams aren’t going to be a soft touch either. Matthew Stafford is obviously huge for the Rams but new faces Kyren Williams and Allen Robinson bring some additional quality to this side as well – and provide Stafford with some top-drawer targets to hit.

On the other end, Bobby Wagner arriving from the Seahawks is a big deal and, should he get to the levels we know he’s capable of then the Rams defensive line will benefit as a result.

We’re getting deep into the territory of outside bets now but the Ravens hopes lay largely with the fitness of Lamar Jackson. Jackson is somewhat of a beast and he’s already set about proving that with his showing against the New York Jets in game week one as he threw three touchdown passes.

With Rashod Bateman and Mark Andrews also out there the Ravens have a real chance of going deep. Mike Macdonald‘s appointment to the defensive side should see them tighten up too.

As football bets go, backing the Eagles to win their division is a pretty shrewd move but how do they measure up for a tilt at the big prize? Well, Jalen Hurts and AJ Brown have almost instantly struck up some chemistry, which is massive in their quest to win games.

Behind them, you’ve got a lot of faith being placed in youth. Some see that as a negative but the hope will be that they come into action fearless and therefore can deliver their best football. Round one draft pick Jordan Davis is the pick of those inexperienced players and already fans are salivating over the prospect of seeing him destroy teams.

The Broncos were awful last season but this season they’re one of a number of sides with an outside shot of mixing it up in the latter stages of the playoffs. The signing of Russell Wilson is huge; he and Jerry Jeudy have the ability to hurt every single team in the NFL whilst big things are also expected of rookie Greg Dulcich, who looks set to be a starter in the role of TE.

Javonte Williams and Melvin Gordon give the offence another dimension too. Defensively, the Broncos weren’t too shabby last year so there is little reason to expect that to collapse now.

San Francisco enjoyed a solid season last year albeit they made a sluggish start and this year they’ll be aiming to push on again. There is one major change to be aware of though, which is Trey Lance coming in as the starting quarterback.

Given he’s surrounded by a quality offensive line, he should be able to hit the ground running. Of those in the offence with him, Elijah Mitchell is perhaps our pick to watch.

The Vikings made a crushing start to their season and they’ll hope it’s a sign of what is to come for them in 2022. It’s certainly a positive step after a period of change in Minnesota. Mike Zimmer is no longer the coach with Kevin O’Connell now calling the shots.

The arrival of O’Connell should see Justin Jefferson develop into even more of a threat whilst it should breathe new life into Kirk Cousins, who has cut a frustrated figure under Zimmer.

The Colts are the bookmakers’ tip to win the AFC South after an offseason that has seen big moves in the trade window. Matt Ryan, Alec Pierre and Bernhard Raimann have all arrived to quite a bit of fanfare whilst Parris Campbell, who has been with the Colts since 2019, remains a class act.

Defensively, the Colts have lost Matt Eberflus as co-ordinator but with the likes of Kwitty Paye and new men Yannick Ngakoue and Stephon Gilmore they should be a fairly solid outfit even with Gus Bradley bedding in as the new voice.

On pure talent, this Bengals side has all the ingredients to challenge for the Vince Lombardi trophy but football is never that easy. Their pre-season camp was constantly disrupted for one reason of another with Joe Burrow missing a significant chunk along with other members of the offence – including Alex Cappa and La’el Collins also having to dip out of practice.

We’re sure they’ll soon find their rhythm but the lack of time on the grass together could hamper them in the early weeks – as week one has already suggested. Will they gel in time to mount a challenge to the Ravens?

The Dolphins have undertaken massive changes since last season with a change of coach the standout alteration. The arrival of Mike McDaniels has been tipped to unlock the best of Tua Tagovailoa at QB as well and with Hill, who we mentioned when discussing the Chiefs, also arriving via trade, the Dolphins look a good bet to make the postseason albeit they’ll probably be playing second fiddle to the Bills in the AFC East.

Last but not least, we take a look at the New Orleans Saints’ hopes for the new season. The Saints should be emerging from the gigantic shadow cast by Drew Brees last year and Jameis Winston will be hoping to impress after he saw his campaign cut short last year.

Of course, he’s not Brees – nor is he close to that level. What he is though is a capable quarterback with good players around him in the shape of Marquez Callaway and Michael Thomas. If they get that offence cooking then the defence should take care of itself with the new addition Tyrann Mathieu, who was born and bred in New Orleans, the player to watch.

There you have it, a look at the Super Bowl betting odds. Not seen your team? Well, we’ve cut the odds at 30/1 with the next best-priced team being the Browns at 40/1, so, sorry, it’s not looking good for your guys!