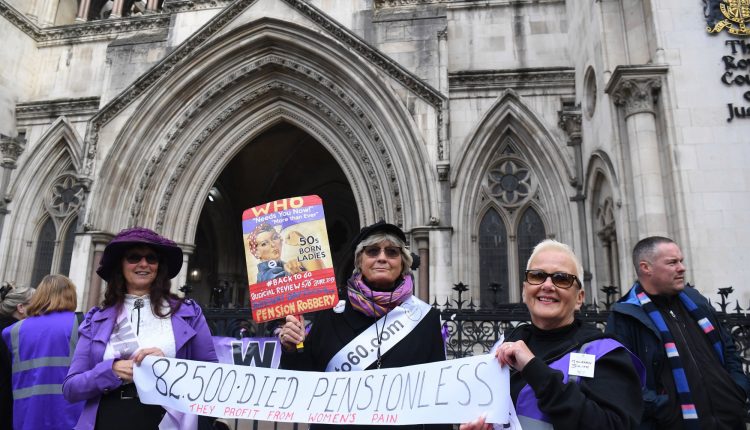 Campaigners have lost a legal challenge against the Government over controversial changes to the state pension age.

Nearly four million women born in the 1950s have been affected by reforms raising the state pension age for their group from 60 to 66.

The changes have been introduced to ensure the equalisation of pension age between men and women, but a large number of women have seen their retirement plans shattered as they claim they were not given enough notice.

Julie Delve, 62, and Karen Glynn, 63 – supported by campaign group BackTo60 – brought a Court of Appeal challenge which they lost today.

Back to 60 campaigner Joanne Welch told the Mirror: ‘Boris said he would approach this with fresh eyes and new vigour.

‘How can the Prime Minister condone the DWP using taxpayers’ money to defend the indefensible in the Court of Appeal when Boris himself said he was going to sort it?

‘The House of Commons, House of Lords have all said 1950s women are grotesquely disadvantaged.

‘Boris Johnson and Keir Starmer and the DWP need to sit round the table and decide what they are going to do for 1950s women.’

Years of battles for women of that age group followed without success. Ministers claimed any changes would cost £181 billion to reverse.

The group lost a High Court fight against the Department for Work and Pensions in October last year, and they hoped the Court of Appeal would overturn the judgment.

The women argued in raising their pension age unlawfully discriminated against them on the grounds of age and sex, and that they were not given adequate notice of the changes.

They found that introducing the same state pension age for men and women did not amount to unlawful discrimination under EU or human rights laws.

As part of their ruling, the senior justices said they feel ‘sympathy’ for those affected but ‘this is not a case where the court can interfere with the decisions taken through the Parliamentary process’.

They said ‘in the light of the extensive evidence’ put forward by the Government, they agreed with the High Court’s assessment that ‘it is impossible to say that the Government’s decision to strike the balance where it did between the need to put state pension provision on a sustainable footing and the recognition of the hardship that could result for those affected by the changes was manifestly without reasonable foundation’.