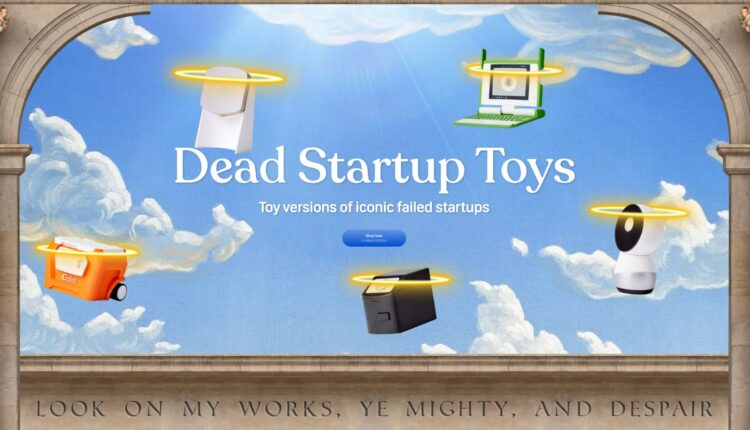 In a nutshell: MSCHF (pronounced “mischief”), the American art collective that launches new “drops” every second and fourth Monday of the month, has unveiled its latest work which pokes fun at failed startups. The Dead Startup Toys are just that – toy versions of iconic failed startups. Five individual toys make up the collection as follows.

Jibo was billed as the world’s first social robot for the home. Its Indiegogo campaign raised more than $3.6 million and although it did launch, it did so a year behind schedule. What’s more, the promised SDK for devs never came, and it was quite limited without it. Few were surprised when the company threw in the towel shortly after launch.

The Coolest Cooler was an over-engineered cooler that made a huge splash on Kickstarter as one of its earlier success stories. Expect, it didn’t have a happy ending as most backers were ultimately left empty-handed. Five years and more than $13 million down the drain. Ouch.

One Laptop per Child had a noble vision – to produce inexpensive laptops for children in developing nations at a price point of just $100. Unfortunately, the effort floundered for multiple reasons (high cost being one of them) and the foundation running it shut down in 2014.

Juicero in the mid-2010s developed a Wi-Fi connected juicing press that used proprietary, single-serve packs of pre-squeezed fruits and veggies. The “high-tech” juicer debuted for a staggering $699, and that’s on top of the $5-$7 you had to pay per juice or veggie bag. Needless to say, consumers weren’t convinced, and the company shut down shop in 2017.

Theranos was a private health tech company founded by Elizabeth Holmes in 2003. The company claimed to have developed a blood analysis machine and supporting tech that’d revolutionize the industry. Investors threw money at Theranos, but what they didn’t know is that the company’s tech was mostly based on lies.

The firm was dissolved and its founder is awaiting trial on charges of wire fraud and conspiracy.

The Dead Startup Toys are available to purchase individually for $39.99 each, or you can get the whole set for $159.99.

Startup hopes the world is ready to buy quantum processors