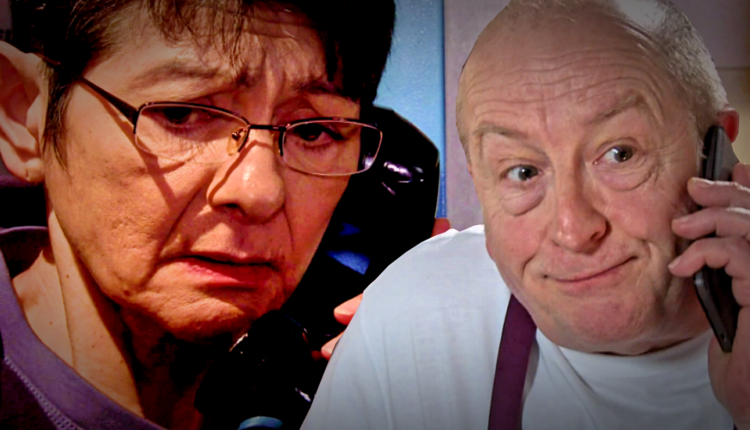 Geoff Metcalfe (Ian Bartholomew)’s evil behaviour is catching up with him in Coronation Street, as his hold over Yasmeen Nazir (Shelley King) is starting to weaken.

This week has seen Sally (Sally Dynevor) realise the truth about his vile treatment of Yasmeen – leading to a confrontation witnessed by his son Tim (Joe Duttine) as he became threatening towards her.

He’s now set to resort to desperate measures to prevent Yasmeen – currently awaiting trial for his attempted murder – from exposing his true colours to the world – and is set to try and persuade her that he still loves her.

But will Yasmeen go back to him?

We don’t know yet whether Yasmeen will be persuaded to go back to Geoff.

However he will be making attempts to win her back on Wednesday night, intercepting Alya (Sair Khan)’s mobile when she is expecting a call from Yasmeen.

Yasmeen is petrified when she hears Geoff’s voice but he implores her to listen to him – and tells her that he is willing to forgive her and have her back as his wife.

Insisting that he still loves her, Geoff tells her that he is going to drop the charges and withdraw the statement against her.

He heads to the police station and tells her that he wants to take back what he said – however he soon learns that it’s not going to be as simple as all that, as the officer tells him that since Yasmeen is already charged and awaiting trial, it’s up to the CPS whether they proceed with the case.

All of which gets Yasmeen thinking – and she’s got a big decision to make when she later contacts Geoff, who tries to persuade her that things will be different if she just gives their marriage another go.

Will she go back to him? You’ll have to keep watching to find out what happens next.

Coronation Street continues on ITV on Wednesday night at 7.30pm.