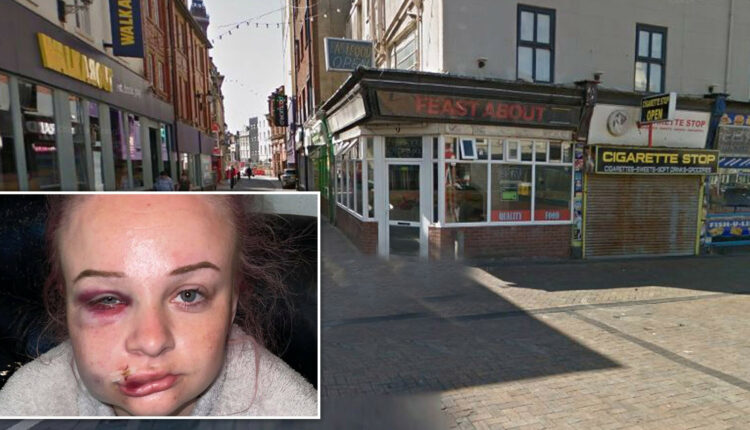 An NHS worker was ‘knocked out’ and left needing stitches inside her mouth after being targeted in a ‘disgusting and unprovoked’ attack outside a takeaway.

Shannon Thomas, 22, smashed her head on the pavement after being felled by a single punch moments after stepping out of Feast About in Queen’s Square, Blackpool.

She said she has no memory of the appalling assault and can only recall coming around in the back of an ambulance a short while later in the early hours of Sunday morning, June 27.

Her sister shared a photo of Ms Thomas on social media in a bid to track down the unknown male responsible.

It shows the entire right side of her face swollen up with dark bruising around her eye, which is half-closed, and stitches closing a cut above her top lip.

Ms Thomas told LancsLive: ‘This attack was completely unprovoked and is disgusting behaviour.’

She went on: ‘I don’t remember much from a few seconds before until I was in the ambulance.

‘I just know that I walked out of the takeaway and this man just punched me in the face once – totally unprovoked.

‘But due to the impact, it knocked me out and I fell straight onto the back of my head.’

The NHS worker has been left ‘very sore and very shaken up’ and ‘just wants this dealt with’, her sister, Sara McDermott said.

Posting the photo of the injuries on Facebook, she wrote: ‘My sister was attacked in Blackpool early hours of Sunday morning by an unknown male looks in his 20s with fair hair.

‘This happened outside Feast About takeaway on Queens Square. My sister was punched to the face and knocked out.

‘She has had to have stitches inside her mouth and also on her lip. This attack was completely unprovoked and is disgusting behaviour. Can I please ask people to share this far and wide?’

A spokesperson for Lancashire Constabulary said: ‘We were called around 2.45am on Sunday to a report of an assault in Blackpool.

‘A woman in her 20s reported being punched to the floor by a man in Queens Square.

‘The woman suffered facial injuries and was taken to hospital for treatment.

‘No arrests have been made and an investigation is underway.’