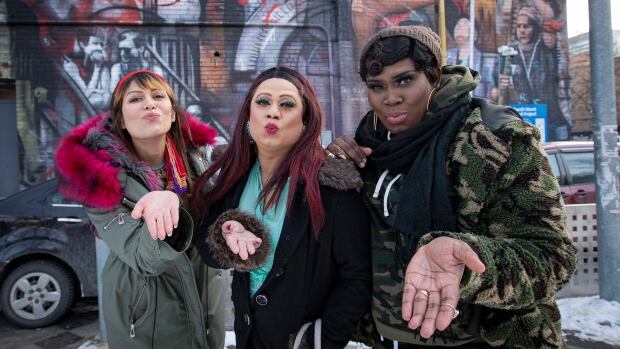 The pandemic has cut many people off from the communities they rely on, but for transgender women of colour, the isolation and lack of support networks have made the past 11 months an especially dark and difficult time.

The pandemic has cut many people off from the communities they rely on, but for transgender women of colour, the isolation and lack of support networks have made the past 11 months an especially dark and difficult time.

CBC News met with three transgender women of colour in Toronto recently, all of whom immigrated to Canada in the past decade because their sexual orientation and gender identity was not accepted in their birth countries.

Before COVID-19, they said, their lives were busy and rewarding, full of volunteer work, jobs and school, but the pandemic restrictions put all that on pause, leaving them feeling isolated and worrying about their health and mental well-being.

We talked to them about what has been the most challenging about the pandemic and what they are looking forward to post-pandemic.

“Before [the] pandemic, my life was so wonderful,” said Mona Lisa, who no longer uses her given name, Sajib Hossain, except on government documents.

She met regularly with a group of trans friends at The 519, an LGBTQ2S community centre in downtown Toronto that runs a program called Trans People of Colour, or TPOC, which organizes workshops, classes and social gatherings.

She joined the group in 2018 soon after she came to Canada as a refugee.

“I met this woman, her name is Yasmeen … at the Gay [Pride] Parade,” she told CBC News of her first encounter with TPOC project co-ordinator Yasmeen Persad.

Persad invited her to attend weekly cooking classes at the centre where trans people of diverse cultural backgrounds shared dishes and experiences from their homelands .

“Oh my God, it’s like me! Everything is colourful!” Mona Lisa said of the first time she attended the class and saw the range of food and spices on display.

But since the pandemic shut down TPOC’s weekly workshops, Mona Lisa has missed that in-person interaction and struggled with depression.

The isolation has brought up memories of her past and some of the struggles she had as a child, she said.

Born as the only boy in a devout Muslim household of six children in Dhaka, Bangeladesh, she started conflicting with her birth gender at the age of five.

“I’m different. I’m not like other boys,” she said she realized at the time. “My father [bought] me football, cricket … But I like dolls, I like makeup. Sometimes, I steal my mother’s lipstick, and I put [it on] … then they’re (her parents) beating me terribly.”

At 15, Mona Lisa made her way to South Africa to escape a marriage arranged by her father. Years later, she fell in love and married a Johannesburg man after gay marriage was legalized in the country in 2006.

But violence against LGBTQ members within the city’s Muslim community forced the couple to make a difficult decision. They separated, and with her husband’s support, Mona Lisa came to Canada on her own in 2018.

She started volunteering with TPOC, but since COVID-19 forced it to shut own, she’s been cooped up in the small apartment she shares with four other women with little to do.

She says the long period of isolation has led her to have thoughts of suicide but that she talked herself out of those dark thoughts by remembering how far she has come. Mona Lisa describes feeling isolated and cut off from her community during the COVID-19 pandemic. 0:59

Vanessa Carter was born in Bridgetown, Barbados, “a small town where Rihanna is from,” as she describes it.

She was raised by her grandparents who supported her gender identity. But when her femininity started showing more around age six, she began to be bullied at school and on the street and even at home by relatives who were not as supportive as her grandparents.

“Your home is supposed to be your safe place, but for me, home is a nightmare,” she said, tearfully, “My uncle made it hard for me to be me.”

She came to Canada in 2011, a month after her 26th birthday. She recalls getting her first glimpse of Toronto’s gay village in the Church and Wellesley area and being impressed to see gay couples holding hands and kissing in public.

“It’s an honour to be able to express yourself,” she remembers thinking.

Before the pandemic, Carter was a regular at TPOC. She was an active member of its cooking classes, health seminars, and socialized with trans women from different cultural backgrounds.

“It taught me a lot,” she told CBC News. “I was looking forward to it every week.”

She also expanded her community involvement beyond TPOC and started volunteering at Salon Noir, which tackles issues facing the Black trans and gender-queer community, such as mental health, homelessness and drug abuse.

But the pandemic put a stop to all that and plunged Carter into one of the darkest times of her life, she said.

“We are on the fringe of society already,” she said. “It was very tough for everyone, but it was even tougher for the girls that are marginalized.”

Depressed by the sudden deaths of two close friends and the loss of the work she was doing helping trans women, Carter said she began having panic attacks.

Asked what would be the first thing she would do once pandemic restrictions are lifted, Carter said, “I’m a hugger, and I want to hug my friends. I want to be around my friends.”

WATCH | Vanessa Carter says she’s had bouts of anxiety during the COVID-19 lockdown: Vanessa Carter explains why losing access to services, workshops and other forms of connection during the pandemic has been devastating for some members of the transgender community. 1:02

Mariana Cortes says she feels very thankful for being able to continue working during the pandemic as a social worker at a women’s shelter in downtown Toronto. She is also a full time online student in the social work program at George Brown College.

The 29-year-old came to Canada in 2017 from Colombia, where she studied fashion and marketing, hoping to use “the power of dressing up” to fight bias and harassment toward trans people.

“After I started my transition … I wasn’t able to find a full time job,” she said.

When she disclosed her trans identity during job interviews, for example, she was often not called back, and when she eventually did get a job, she was alienated by her colleagues, she said.

TPOC was the first trans group Cortes was involved with in Canada, and she has since become a peer outreach worker there, helping other trans immigrants adapt to their lives here, including finding jobs, tackling workplace harassment and accessing trans-specific health services.

That part of her work has become difficult to do in the pandemic because not everyone has access to the internet or devices.

“All these programs are moved to online,” Cortes said.

She said she sometimes feels guilty about not being able to help everyone.

“I have seen people close to me not doing well, and I’m not in the best position to support [them].”

She said the impact of isolation on trans people’s mental health has been “catastrophic.”

“I work with a lot of trans folks. Their mental health is my No. 1 concern.”

But she has other worries for her community, too, such as the lack of safe housing; access to medications for hormone therapy during and after transitioning; and “just not being able to speak with people that have similar experience to you.”

She said she’s had her own bouts of depression but being productive has helped her stay positive. She is one of the main contributors to Cooking with Trans People of Colour, which will be published later this month by The 519 and includes healthy recipes from various cultures as well as resources for trans sex education.

Cortes’s recipe is based on sancocho, a traditional Latin American stew that’s meant to be cooked and shared with a large group of people from the same community.

She changed the name to transcocho and gave it her own English translation: chicken stew for the soul.

“Because it’s a healing meal, right?” Mariana Cortes explains that while everyone has struggled in the pandemic, members of the transgender community who lack support networks, adequate housing and income have been hit particularly hard. 0:54