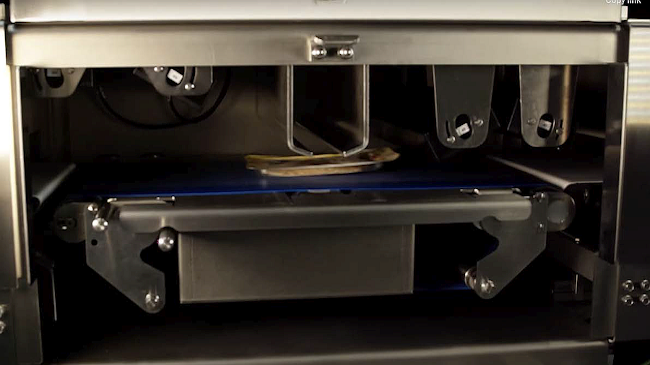 X-ray inspection of food products is becoming increasingly popular worldwide. This is likely due to two factors. First and foremost are the high costs associated with a food recall caused by foreign body contamination. Second, studies performed by the FDA and other organizations have concluded scanning food with X-ray scanners does not pose a health risk – putting to rest any lingering concerns on that front.

During this uptick, recognition is building that this sophisticated approach to inspection can detect more than just metal. This distinction is important, because food suppliers and end users typically identify glass, ceramics and even dense plastics as frequent foreign substance culprits.

X-ray scanners also can perform quality control functions above and beyond foreign substance detection. For example, in yogurt cups or ketchup bottles, X-ray systems can be utilized to verify accurate fill levels. In other food segments, pizzas can be checked to assure adequate roundness, pralines can be counted in the equipment tray prior to packaging and, perhaps most impressively, cheese can be classified according to ripeness.

Despite its wide array of potential benefits, however, misconceptions persist about X-ray inspection and its applications. Let’s dispel two of the most common myths.

It is widely understood that the effectiveness of an X-ray inspection module largely depends on the density of the foreign bodies it is tasked with detecting. And while this may be the case in some application scenarios, this size-centric view of detectability is by no means a universal commonality.

The reality is that the primary characteristic that determines the unit’s absorption of radiation – and therefore its detectability – is the foreign object’s atomic number. The more it “radiates,” the easier it is to detect; and while size tends to increase this characteristic, the complete picture is far more complex.

Take glass, for example. For X-ray scanners tasked with finding glass-cased foreign objects, a key factor is the type of glass. Unlike, say, Stainless Steel 316, glass is not a strictly defined material composition. Glass used for packaging applications like bottles and jars constitutes the highest risk for contamination, due to the varying nature of its composition. This presents a wide range of scenarios where an X-ray scanner needs to distinguish between the proper glass material of the container and any bit of glass contamination caused by a foreign material hidden in the product.

Meanwhile, “soda-lime glass” consists mainly of silicon dioxide – but there is a strong variation concerning the percentage. Another factor fomenting composition variability is that today’s glass is mostly recycled.

All this leads to quite a bit of variation owing to different ingredients, additives and contaminants that can increase the absorption of the glass dramatically. For example. silicon alone has an atomic number of 14, just slightly more than aluminum (13); this leads to similar absorption rates. But if the glass is contaminated by something like lead (atomic number 82), it will have a much higher absorption even if the overall density remains similar to standalone glass.

This effect becomes particularly important during comparison tests between X-ray systems. Here, it is ill-advised to compare detection results of competing modules, because the glass they are testing may not be created equal. In this scenario, the machine detecting glass containing even trace amounts of a substance with a higher atomic number has an inherent, unfair advantage. In other words, comparing glass detection to glass detection is often like comparing apples to oranges.

Nevertheless, the commonly perceived density paradigm employed in day-to-day applications is not entirely misguided. If a foreign object issue occurs in the factory, this simplified approach to quality assurance is usually sufficient to efficiently determine whether the matter should be investigated more thoroughly. If the contaminant floats in the water, it is not necessary to perform further testing as – under usual circumstances – a single energy X-ray system will not be able to find it. If it does not float, it is worthwhile to have a discussion with X-ray experts, who might have local test facilities for further investigation.

While X-ray inspection units certainly require some amount of additional space, their overall impact on precious floorspace can easily be mitigated.

The hesitance is understandable: In the food industry in particular, space is always at a premium, especially when it concerns integrating new equipment into existing production lines. One approach is to fully integrate a special X-ray unit into a thermoforming and filling machine (FFS) – a tidy solution in, for example, yogurt cup production.

Another novel approach involves combining compatible units. Despite the specified space requirements for radiation protection, an X-ray scanner can nonetheless share space utilized for other inspection tasks, such as checkweighing. In fact, efficiency-minded solutions exist that proficiently combine X-ray and checkweighing inspection functions in a surprisingly condensed space. Such dual-task modules also can be equipped with vision systems that bring additional benefits, including faster product changeover via software-centric label recognition and manufacturing metrics analysis for optimized line efficiency.

Many of these units are exceedingly functional despite their compactness, combing contaminant detection with the ROI-centric goal of minimizing giveaway through precision weighing. Applications where these types of joint solutions are especially valuable include retail-packed convenience food, ready meals in foil trays and small end-of-line packaged goods. Many offer advanced quality control systems that distinguish whether a product was rejected for weight or contamination – a helpful, downtime-reducing first step toward remediation. For ease of operation, some offer linked, icon-driven touchscreen HMIs for integrated equipment communication and seamless product transfer.

In addition, an X-ray scanner can be downscaled to match the size of the products it inspects. Such downsized models are specifically designed for small products such as soup pouches, cereal bars, chocolate or small trays. Despite their diminutive stature, these units often deliver impressive throughputs without sacrificing accuracy or versatility, making one module suitable for various small-item inspection applications.

About the author: Jim Renehan is senior marketing manager for WIPOTEC-OCS, a leading manufacturer and supplier of precision in-motion weighing and X-ray scanning equipment. www.wipotec-ocs.com/us.

Recall expanded to include all El Abuelito Cheeses for Listeria monocytogenes