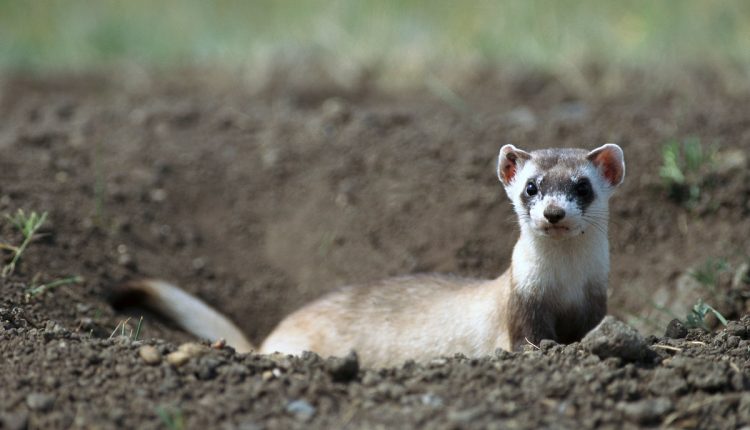 Scientists have successfully cloned an endangered black-footed ferret, using preserved cells from a long-dead wild animal. This is the first time any native endangered species has been cloned in the United States.

The advance is a milestone for the conservation of black-footed ferrets, North America’s only native ferret. This species was once found over vast swathes of the American West, but they dwindled as farmers and ranchers eliminated their primary prey, prairie dogs. By the 1970s they were thought to be extinct. Then, in 1981, a ranch dog led scientists to a colony of 18 on a property in Wyoming.

Those survivors became the basis of a captive-breeding program managed in part by the U.S. Fish and Wildlife Service in Colorado, and the animals have since been reintroduced to eight states in the Great Plains. But only seven of the original wild animals bred, and all living ferrets are closely related. Their wild population today is roughly 400 to 500, says Pete Gober, black-footed ferret recovery coordinator for the service.

This new clone is a genetic copy of a wild female named Willa, who died in the mid-1980s in Wyoming and has no living descendants. Her cells have been cryopreserved at the Frozen Zoo, a program of San Diego Zoo Global that has collected samples from some 1,100 rare and endangered species worldwide. Researchers hope to breed Elizabeth Ann and introduce her offspring into the wild to inject much-needed genetic diversity into the population.

This success suggests that cloning can be a viable tool for conservation, says Ryan Phelan, Revive and Restore’s executive director. It also illustrates the importance of preserving the cells of rare and endangered species, says Oliver Ryder, San Diego Zoo’s director of conservation genetics.

Black-footed ferrets face the continued existential menace of sylvatic plague, an introduced and often deadly bacterial infection spread by fleas, which is the main threat to their survival. Researchers hope increased genetic diversity could help provide resistance to this pathogen. Genetic modification is also a future option, Phelan says.

The cloning process began by taking eggs from sedated domestic ferrets, a related species, which were used to avoid putting endangered female black-footed ferrets at risk. The eggs were matured, and scientists with ViaGen used pipettes to remove the nucleus and genetic material from them, Walker says. After transferring the contents of Willa’s cells into each egg, scientists gave them an activation stimulus—basically an electric charge—to get them to divide, Walker says. This created embryos that were then implanted into a domestic ferret. One of them took.

It’s essentially the same process used in Dolly the sheep 25 years ago, the first mammal cloned from an adult cell—although it’s slightly more complicated as it involves transferring genetic material from one species into another. (Related: In a first, monkeys cloned like Dolly the sheep.)

So far, tests show she’s healthy. She will continue to be monitored, and scientists hope she’ll eventually breed. If all goes well, her grandkids or great-grandkids could be reintroduced to the wild in 2024 or 2025, says Ben Novak, a scientist with Revive and Restore.

The scientists say they don’t expect any negative effects from reintroducing the descendants of a cloned animal into the wild. Like all black-footed ferrets reintroduced to the wild, her descendants would first be acclimated and observed in an outdoor enclosure beforehand, Gober says. There, captive-bred ferrets must show that they are capable of hunting prairie dogs and have the other necessary skills to survive on their own.

Elizabeth Ann is not the first endangered species to be cloned from a long-dead individual. Revive and Restore, the San Diego Zoo, and Viagen previously collaborated to clone an endangered Przewalski’s horse, born in August 2020.

Ryder says he’s thrilled that cells from the Frozen Zoo survived more than 30 years and produced a viable clone. Back in the late 1980s, when he encouraged the collection of skin biopsies from Willa to study the species’ genetics, it was thought that such cells could not be used for cloning. Now, they can even be turned into stem cells, which can then be coaxed into forming any type of bodily cell, he says.

All black-footed ferrets living today are as closely related as siblings or first cousins. Willa’s genes, which now live on in Elizabeth Ann, have three times as much genetic diversity, Phelan says. This infusion of genetic diversity could help the animals reproduce more easily and be more resilient to diseases and stressors.

“Broadening the gene pool seems like a tremendous opportunity to help assure the long-term sustainability of the species,” Ryder says.

Android 12 is here for developers

Battle to control America’s ‘most…