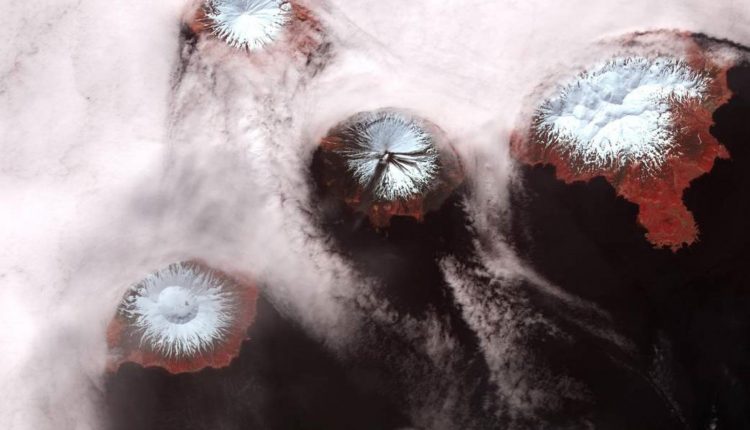 A trail of volcanic islands off the coast of southern Alaska may actually be part of a single giant caldera, according to evidence being presented next week at the American Geophysical Union’s fall meeting. If so, it’s possible the newly revealed volcanic giant once erupted in a blast large enough to dwarf the cataclysmic 1980 eruption of Mount St. Helens.

The behemoth in question is marked by a semi-circular cluster of peaks in the Aleutian Islands known as the Islands of the Four Mountains (IFM). Long thought to be independent volcanoes, the six peaks—including Herbert, Carlisle, Cleveland, Tana, Uliaga, and Kagamil—may actually be a series of connected vents along the edge of a much larger volcanic caldera.

Even if the idea is confirmed, though, the results don’t necessarily foretell of future catastrophe.

“This new research result doesn’t change the hazards,” says John Power, a geophysicist at the U.S. Geological Survey and the Alaska Volcano Observatory who will present the work Monday at the AGU meeting. “We’re not forecasting something dangerous here.” (Learn more about supervolcanoes, and why this term can be misleading.)

Searching for the behemoth

Scientists didn’t set out to seek evidence for the mighty blast when they first sailed to the IFM in 2014, but were instead focused on the region’s archaeology. A second group headed out during the next couple of years to look into the volcanoes’ tectonic underpinnings.

The researchers examined the local geology and employed a suite of technology to study the region, including seismometers to pick up tiny tremors and chemical analyses to understand the composition of gasses effusing from the ground. As they were working through the data, however, perplexing features kept cropping up that they only recently realized may belong to an enormous and ancient eruption.

The first puzzle piece was the curious half-ring shape of the closely clustered IFM volcanoes. One explanation could be a caldera.

Calderas are formed when a massive reservoir of magma suddenly empties and the overlying ground collapses, creating a vast depression in Earth’s surface anywhere from one to 30 miles across. The formation of a caldera produces a host of fractures through which magma can then seep to the surface, so volcanic clusters are common around their edges or centers.

In this case, the researchers suspected that the IFM volcanoes may represent a series of connected geologic structures around a potential 12-mile-wide caldera, which they think lies hundreds of feet beneath the surface of the frigid Pacific waters.

“This would be a simple problem if it were on land,” says Diana Roman, a volcanologist at Carnegie Institution for Science and one of the principal investigators on the project. “But it’s underwater, so it makes it orders of magnitude more difficult.”

Another piece of the puzzle was the discovery of rocks known as welded ignimbrites. These materials form when a large eruption lays down searing volcanic ash so thick that the grains weld together into solid rock, explains Pete Stelling, who participated in the 2015 research season but is not part of the new analysis.

Prompted by these puzzling data, the team began “scraping the couch cushions,” as Roman says, to find any other information to help explain the phenomena. They collected an array of evidence, including gravity anomalies from satellite data and bathymetric surveys that were conducted in the area shortly after World War II. While not high resolution, the seafloor mapping hinted at several curved ridge structures and a depression more than 400 feet deep that could be part of a caldera.

If their suspicions are confirmed, the team believes that the potential underwater basin may have resulted from a volcanic explosion that was just shy of earning the label “super eruption.”

“Any one piece of these pieces of evidence is questionable,” Power says. “But as we get more and more of them lining up, it does become a stronger argument.”

Big, but not the biggest

The team cautions that many unknowns about the structure remain. For one, they are still unsure about the size of the caldera, and they don’t know whether it was made from one large blast or several smaller eruptions.

Even if it was a single event, it would have been a mid-sized blast compared to others around the world through geologic history, Roman notes. For example, a very rough calculation would place the IFM blast about a tenth the size of the one that rocked Yellowstone some 640,000 years ago, says Adam Kent, a volcanologist at Oregon State University who was not part of the study team. “It would be potentially world-changing,” he says. “But not world-ending.”

Still, the preliminary research does provide some tantalizing clues to help scientists better understand the current and potential future hazards in this region.

“This lays a really nice story for future investigation,” says Jackie Caplan-Auerbach, a volcanologist and seismologist at Western Washington University who wasn’t part of the research team.

Help Your Organization Blaze a Trail in a New Market

Leaf-cutter ants are coated in rocky crystal armor, never before seen in insects

How to Get Rid of Pigeons Naturally

Stonehenge Was Part Of A Multi-Monument Complex.…