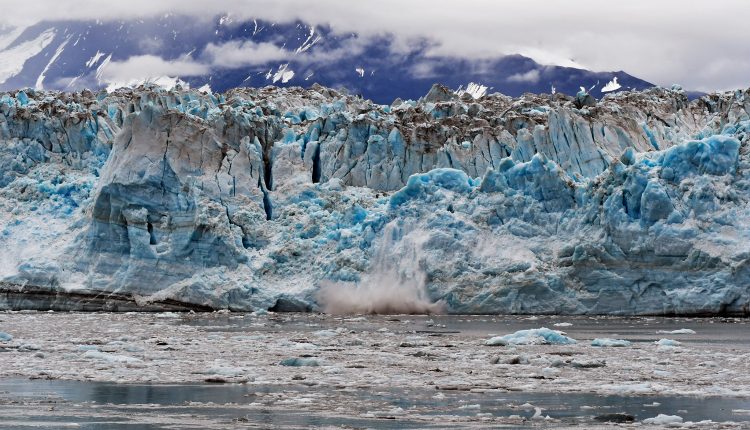 A new way of measuring how some glaciers melt below the surface of the water has uncovered a surprising realization: Some glaciers are melting a hundred times faster than scientists thought they were.
In a new study published today in Science, a team of oceanographers and glaciologists unpeeled a new layer of understanding of tidewater glaciers—glaciers that end in the ocean—and their dynamic processes.
“They’ve really discovered that the melt that’s happening is fairly dramatically different from some of the assumptions we’ve had,” says Twila Moon, a glaciologist at the National Snow and Ice Data Center at the University of Colorado-Boulder who was uninvolved with the study.
Some of this calving and glacial melt is a normal process that glaciers undergo during seasonal transitions from winter to summer, and even through the summer. But a warming climate accelerates glacier melting across the globe, potentially through melting across the surface of the glacier, but also through underwater melting.
Glaciers can extend hundreds of feet below the surface, explained Ellyn Enderlin, a glaciologist at Boise State University who was not involved with the study. Finding higher rates of submarine melting tells us that “glaciers are a lot more sensitive to ocean change than we’ve even thought.” Understanding the melting processes and calculating the amount of melt accurately is essential for planning for sea level rise.

In Seward, Alaska, Exit Glacier is melting at an astonishing rate. This stunning short film examines the glacier’s dramatic impact through the voice of local guide Rick Brown.

“We are just super jazzed that we can even do this,” says lead author David Sutherland, an oceanographer at the University of Oregon. “We weren’t 100 percent sure it was going to work.”

Monitoring specific glaciers for a long period of time can give researchers—and high school students—an idea of climate change-induced melting. Students at Petersburg High School near LeConte Bay started collecting data about the position of the glacier’s terminus in 1983. Their noting of the glacier’s retreat several years ago alerted scientists at the University of Alaska Southeast, piquing interest in better understanding melting at the glacier.

Measuring melting masses of ice
LeConte was an ideal glacier to study because it is really accessible for a tidewater glacier, Sutherland said. A complex environment, the project required so many lines of data that teams of oceanographers and glaciologists collected data simultaneously at the glacier.
Calculating how fast a glacier melts requires more finesse than measuring a melting ice cube in a glass of water. With a glacier, you have to know how fast the ice moves into the fjord, as well as what proportion is melting and what proportion is breaking off, or calving.
It was “pretty simple in my head, and sounded good on paper,” laughs Sutherland. But navigating a boat into the fjord, where the LeConte Glacier slips into the sea, is tricky on a good day. Scientists spent weeks aboard the boat working 24 hours a day, with each scientist taking 12-hour shifts.
Mountain goats scrambled on ridges above and whales frequented the fjord, with seabirds dipping into the water. “When you aren’t wishing for better weather…it was a pretty awesome place to be,” says Sutherland.
From the 80-foot MV Stellar, oceanographers performed sonar surveys underwater, like the ones used to measure ocean depths. Instead of directing the sonar toward the ocean floor, though, they angled the sonar to collect the 3D underwater portion of the glacier face.
Oceanographers then had to know how quickly the sonar traveled through the fjord water to make accurate calculations. Further “basic” measurements of water properties, like salinity and temperature, were necessary, Sutherland explained. Dangling super-expensive instruments over the side of the boat could sometimes be tense.
Scientists repeated their observations during two summers, obtaining multiple scans each trip.
“To be able to scan an entire glacier face repeatedly over the summer is not easy,” says Eric Rignot, a glaciologist at the University of California, Irvine who was not involved with the study.

Too much ice in front of the glacier means “the boat can’t push through the ice,” says Rignot. Sometimes that meant the boat suddenly had to retreat from the face of the glacier, while scientists crossed their fingers that the equipment wasn’t sheared off into the water.
Simultaneously, a team of glaciologists camped on a ridge overlooking the glacier. They “babysat” a delicate radar instrument to measure the natural movement of the glacier. Time-lapse cameras were used to measure glacier flow so that they knew how fast the ice moves toward the ocean, says Jason Amundson, a glaciologist and co-author of the study at University of Alaska Southeast.
Glacial ice accelerates as the ice approaches the front of the glacier, where it drops into the ocean, said Moon. She compares the ice movement to squeezing a tube of toothpaste: Once your toothpaste gets to the very end, it doesn’t have any other toothpaste blocking its progress, so it moves more quickly. Ice near the glacier face can move almost 75 feet per day and knowing this speed is essential to calculate melting.
From the datasets, researchers were able to calculate a total melting rate for the underwater portion of the glacier: two orders of magnitude higher than they expected. Rignot said one of the theoretical models, used for 20-30 years, was known to be a simplified version that didn’t work perfectly.
Several processes of melting happen at a tidewater glacier, which is why scientists tackled the melting mystery from multiple angles. If a big block of ice is sitting in a bathtub and nothing else is going on, it would just be melting at a background rate.
When a plume of freshwater from surface melt enters the fjord, it hits the fjord close to the glacier face. The more buoyant freshwater rises to the surface and then undercuts, or erodes the glacier face.
And then you have this submarine melting that occurs wherever the ocean touches the surface of the glacier. The really cool part of the new method, said Sutherland, is that you can pinpoint the exact location where higher melt occurs.
“A considerable amount of ice that gets pushed out into the ocean melts right there where it’s in contact with the ocean…so that glacier is actually losing a lot of mass due to that melting,” says Enderlin.
“A pretty large percentage of the ice that flows into the ocean is melted away by the warm ocean water,” says Amundson.
They calculated that the glacier melted underwater at a rate of almost 5 feet per day in May and up to 16 feet per day in August. Later in the season, the warmer water increased the underwater melting. Usually less than 6 degrees Celsius, water in LeConte Bay is warm relative to the ice, and even other fjords around the world.

What about other glaciers?
The success of the new method “opens the door for researchers to do this all over the world,” says Sutherland. Specifically, insight from the research at LeConte Glacier in Alaska could be used to study glaciers in Greenland and Antarctica. “Submarine melting may matter everywhere,” says Enderlin.
Only 50 of approximately 100,000 glaciers in Alaska are tidewater glaciers, and they’re some of the biggest. These “glaciers can change much more quickly than valley glaciers because of the processes that are happening right where the glacier flows into the ocean,” says Amundson.
Primarily a massive ice sheet, Greenland has about 200 outlet glaciers, but the water there is much colder compared to the temperature in LeConte Bay.
Alaskan glaciers primarily experience surface melt, since so few end in the ocean, said Rignot. Greenland experiences surface melt as well as melting by tidewater glaciers. But in Antarctica this submarine melting is the only type of ice melt, so understanding the processes outside Alaska are important.
If you turn the knob of climate up, like with climate change, says Sutherland, you increase the temperature of water and air and you will certainly get more melting. That can be difficult to disentangle from natural melting, though.
“These observations pretty clearly show us that there are things that we’ve been missing,” says Moon. “It’s a real call to action,” to better understand how these systems work.
Fortunately, scientists have some time to figure it out.
“These glaciers aren’t getting lost that fast…they’ll be around for decades to come,” says Sutherland.

A celebration of Jim Carrey’s historic (and hilarious) 1994