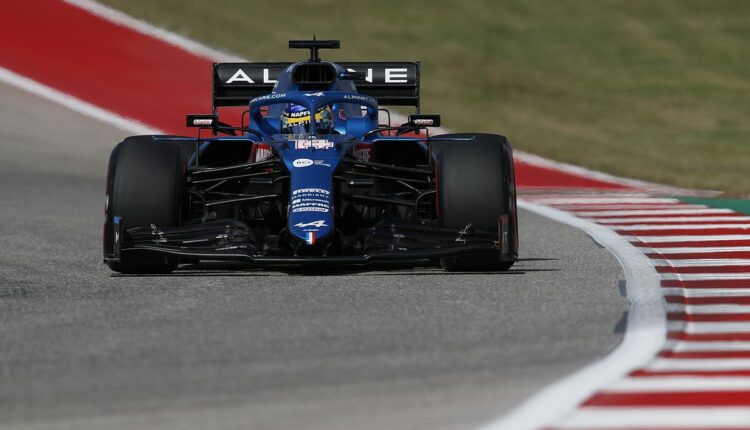 The Spaniard was left animated during the Austin race when Raikkonen moved past him in their fight for points after running across the kerb on the exit of Turn 1.

On an afternoon when a host of drivers, including Alonso himself, were forced to give up places for gaining an advantage when running wide, he says he is baffled as to why Raikkonen was given an extra allowance.

And in particular he did not buy the suggestion that Raikkonen had only run off the track because he had been forced wide.

“Obviously it is their decision so we have to accept it,” said Alonso about the FIA call on the Raikkonen move.

“I don’t know if you saw the whole race, but there was the same incident I think on lap one with Lando [Norris], in Turn 12. He braked on the inside, overtook Sainz, Sainz went off track, retook the position and [he had to give the place back].

“And then in the last part of the race, when I overtook Giovinazzi for the second time, I braked on the inside at Turn 12. And again, I forced him off track. He regained the position off track and that time he had to give me back the position.

“So, in a way, you always force a guy to go off track when you brake on the inside: you commit to an overtaking. And they [the driver on the outside] need to decide if they back off, or keep the full throttle off the track outside the circuit.

“It is what Sainz did. Giovinazzi did, I did. And we have to give back the position for sure, because you are running full throttle off track. But Kimi didn’t. So that’s why I felt that it was not consistent.

“I lost like 10 seconds by doing all these things, and obviously the point possibilities were gone. But I mean I’m not too mad about this because it is only a one point place. And then we have the failure of the rear wing anyway, so it didn’t change our race, arguably. So this is not a problem.”

Alonso’s frustrations with the Raikkonen situation came ahead of an intense battle with Giovinazzi, that exposed the rules over drivers running wide gaining an advantage.

But Alonso insists he did not get involved in those moments with the Alfa Romeo driver to try to prove a point.

“I felt okay when I overtook Antonio,” he said. “I braked very late into Turn 12 and I missed the corner on exit. So when the team told me that I need to give back the position, I understood that it was the right thing to do and it seemed logical to me because I braked too late. If there was a wall there I would never brake that late, so I took advantage of going off track and I have to give back the position, so I slowed down.

“Unfortunately I was three seconds in front of him already, so I lost a lot of time. But I understood the decision. And then Gio did the same thing and he had to give me back the position. So yeah, it came back to my original point that, with Kimi, it felt strange.

“But I was not trying to prove anything. I was just trying to recover places. P10 was the real target and we try. And we respect obviously everything that the FIA says.”