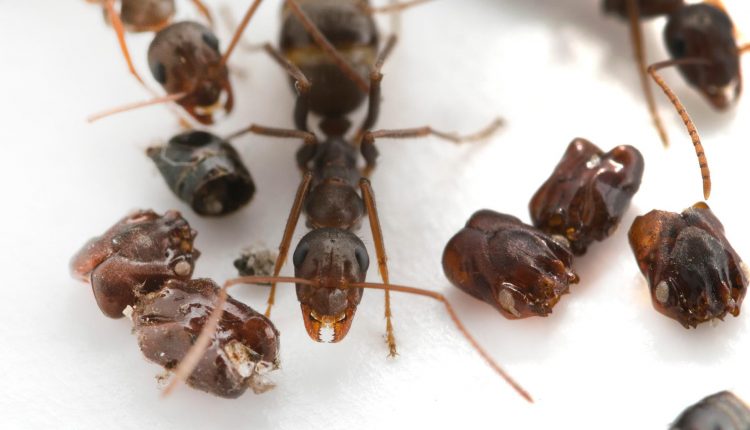 Scientists are beginning to solve a mystery involving three ants: A headhunter, a formidable biter, and a kidnapper.

For 60 years, scientists have known that one species of small, rust-colored ant known as Formica archboldi likes to decorate its nests with skulls, or head cases, of several kinds of trap-jaw ants.

This is bizarre, because trap-jaw ants come equipped with potent stingers and gigantic mandibles that can snap closed like a beartrap. These massive mouthparts come with some special features, such as allowing the insects to catapult to freedom when facing attack.

Diminutive F. archboldi ants, native to Florida and surrounding states, nevertheless succeed in taking them down and nabbing their heads—but how?

“Something weird was going on but no one had looked into it yet,” until now, says Adrian Smith, a research biologist at North Carolina State University.

In a new study published in the journal Insectes Sociaux, Smith has shown that F. archboldi subdues its quarry with quick, highly efficient sprays of toxic acid.

This is curious, says Smith, because while most of the ants in this family possess acid-spraying nozzles, they usually only deploy them as a means of last defense. F. archboldi, on the other hand, goes on the attack.

“They just seem to be sort of ready for the fight,” says Smith.

No one is sure why the headhunters should be such effective predators of trap-jaw ants, but it may have something to do with a waxy layer of scents ants produce called cuticular hydrocarbons. When Smith sampled these scents from F. archboldi, he found that they matched the species of trap-jaw ants they co-occur with almost perfectly.

It’s as if the lion were evolving to smell like the zebra or the rattlesnake the field mouse.

Common sense would tell us that mimicking the scent profile of its prey gives the headhunter ants some advantage over them in battle. But Smith hasn’t seen any evidence of this.

But he does have another hypothesis, one that involves yet another ant species known to kidnap and brainwash entire colonies of F. archboldi.

It’s difficult to overstate how important chemical cues are to ants. While the animals have eyes, they rely on scents to allow them to follow their nestmates to rich food supplies, identify friend from foe, and even to avoid being mistaken as trash and ejected from the colony.

But some ants also use their scents as a cloaking device.

“So there’s this genus of ants called Polyergus. Their old common name was slave-making ants, but we use the term ‘dulotic ants’, or pirate or kidnapper ants,” says Smith.

Whatever you want to call them, they mean business.

Once a kidnapper ant queen identifies a headhunter ant colony, it sneaks in, murders the incumbent queen, and then “bathes in her bodily fluids,” says Smith. The imposter then uses this newly acquired scent profile to avoid detection while she pumps out a bunch of eggs. These hatch into a generation of workers whose only job is to go out and capture more Formica ants.

Now, because each kidnapper ant species typically parasitizes just one species of Formica ant, Smith says there’s a pretty good evolutionary incentive for the Formica ants to keep changing their scent profiles in an attempt to throw the kidnappers off their game.

In fact, it’s possible that this is why the headhunter ants have evolved to smell like trap-jaw ants, the latter of which are not parasitized by the kidnappers. Not to gain advantage over the trap-jaws, mind you, but to disguise themselves as another species.

“But I have no evidence for that at all,” says Smith. “It’s just pure speculation.”

One thing is clear, at least. The matching hydrocarbon profiles are unlikely to be a coincidence, because the headhunter ants are only found in areas where there are also trap-jaws. What’s more, the headhunters have only been found to mimic native trap-jaw species, not ones that have been recently introduced.

All of which points toward a complex, co-evolutionary relationship between the headhunters and the trap-jaws, says Smith. Even if we don’t fully understand what that relationship is yet.

Other experts in these species found the new paper both surprising and befuddling.

“I find that Formica archboldi can take down, and even specialize, on large trap-jaw ants remarkable,” says Andy Suarez, an entomologist at the University of Illinois at Urbana-Champaign. “Subduing trap-jaw ants with their formic acid spray seems like something out of a Peter Jackson film.”

Corrie Moreau, an entomologist at the Field Museum of Natural History and a National Geographic Explorer, agreed that the new study was interesting. (Read: Meet the woman making ants the next big thing in biology.)

“Despite the careful analytical work done on this odd animal the question still remains, why do these ants surround their nests in the skeletons of their prey?” says Moreau. “I wonder if they use the dead bodies of their prey to mask themselves in the scent of their local prey species.”

“This just shows that the more you know about nature, the more questions you uncover,” she says.

ShopTo warns customers with Xbox Series X/S pre-orders that they may miss out on launch day consoles, too

1 in 4 Ubisoft employees have seen or witnessed misconduct at work, a new staff survey reveals

Before plants or animals existed, this 250,000-ton rock fell in the mud. Here’s…

How the death of business travel will change your next…