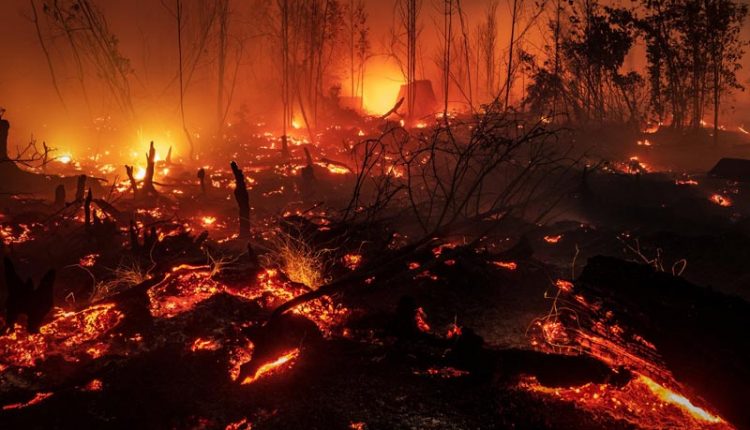 As Amazon Smolders, Indonesia Fires Choke the Other Side of the World

JAKARTA, Indonesia — Brazil has captured global attention over deliberately setting fires that are burning the Amazon rainforest, often called the earth’s lungs. Now Indonesia is compounding the concern with blazes to clear forest on the other side of the world.

Indonesia and Malaysia have issued severe smog alerts as fires rage in large sections of their rainforests.

Both countries have closed schools and issued face masks.

Many of the fires are started by illegal land clearing to make way for palm oil plantations or for subsistence farming.

Thousands of fires, most of them set to clear land for plantations that make palm oil, created thick clouds of smoke that disrupted air travel and sickened people.

Hundreds of wildfires burned across Indonesian Borneo and Sumatra on Tuesday, producing thick clouds of smoke that disrupted air travel, forced schools to close and sickened many thousands of people. Poorly equipped firefighters were unable to bring them under control.

Officials said that about 80 percent of the fires were set intentionally to make room for palm plantations, a lucrative cash crop that has led to deforestation on much of Sumatra.

The slash-and-burn conflagrations, which tore through sensitive rainforests where dozens of endangered species live, immediately drew comparisons to the wildfires in the Amazon basin that have destroyed more than 2 million acres.

“That’s how they clear the land, using the cheapest method and conducted by many people,” said Agus Wibowo, a spokesman for Indonesia’s disaster management agency.

The fires in Indonesia and the Amazon contribute to climate change by releasing carbon dioxide, a major greenhouse gas, into the atmosphere and by destroying trees and vegetation that remove such emissions from the air.

Many palm oil plantations in Indonesia are a direct result of American policy decisions from the mid-2000s.

Aerial footage showed huge clouds of white smoke billowing up across vast tracts of Kalimantan, the Indonesian part of Borneo. Both Borneo and the island of Sumatra are home to endangered species of orangutan.

The disaster management agency identified 2,900 hot spots throughout Indonesia, including a large number of wildfires burning on Sulawesi and Java islands and in Papua Province.

The fires occur annually at this time of year, the dry season, and have long been a contentious issue between Indonesia and its neighbors as the smoke drifts over Singapore and parts of Malaysia, including the capital, Kuala Lumpur.

The fires now are the worst Indonesia has seen in several years, in part because this year has been particularly dry.

Indonesia’s president, Joko Widodo, visited an area of Sumatra on Tuesday that has been among the hardest hit and said the government would seed clouds in the hope of bringing rain. He also said he would pray for rain.

He urged residents not to set fires and to put out new blazes immediately.

The president said 52 firefighting aircraft had been deployed in the fire zones in Kalimantan and Sumatra, roughly one for every 26 of the hot spots identified there.

“We are dealing with sizable forests, vast peatlands,” he told reporters. “If there are lots of fires like this, it’s not easy. Therefore I ask everybody, all the people, not to burn land, both forests and peat.”

Last week, the government said it had shut down more than two dozen plantations after fires were spotted burning on their land, including four owned by Malaysian companies and one by a Singaporean firm. The companies could face charges.

The president’s chief of staff, a retired general named Moeldoko, sparked controversy last week with a tweet saying that the fires were a test from God.

“All disasters come from God,” he wrote, suggesting that the fires were not caused by people. “And what we need to do is not to complain but try to live it with sincerity and pray for God’s help.