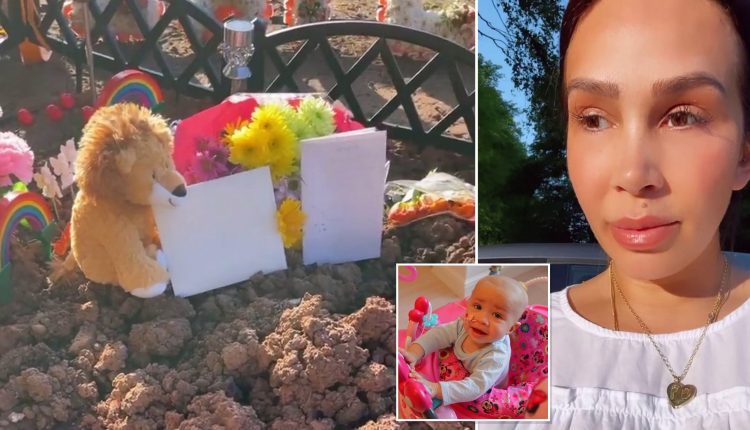 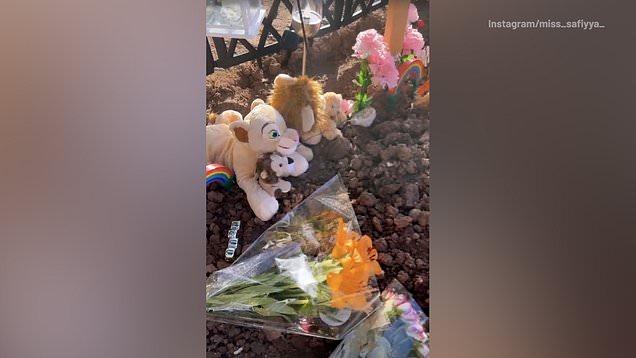 Ashley Cain’s partner Safiyya Vorajee has shared her grieving process after her daughter Azaylia’s death and visits her grave up to three times a day.

Azaylia died in April at just eight months old following a battle with a rare form of leukaemia. She was buried in their local area of Nuneaton on May 21 during a private funeral.

Over the weekend, Safiyya filmed herself making a visit to Azaylia’s graveside, which has been covered with beautiful flower arrangements, teddy bears and fairy lights.

She told her followers in her Instagram stories: ‘I come down and I sit with Azaylia a couple of times a day. Sometimes two, three times a day, and literally my anxiety at the minute is so so high to take it under control and I’m just really really struggling at the minute.

On Bank Holiday Monday, Safiyya was invited out by her brother and sister-in-law to spend time with her nephew Noah.

The group headed to the adventure playground at Coombe Abbey and Safiyya admitted it did her good to get out of the house.

‘I tried to get myself out of bed this morning and actually do something because the last few days have been a bit of a challenge,’ she said before adding: ‘So thanks for getting me up today guys.’

At one point, she considered going on the zipline but, adorably, Noah wouldn’t let her as it was too high.

Safiyya later captioned an Instagram story on the day out: ‘The last few days have been incredibly hard and such a challenge. Everyday my pain aches harder.’

Last week, Ashley shared footage of his heartbreaking eulogy at Azaylia’s funeral where he fought back tears and explained how she changed his life for the better.

Ashley and Safiyya welcomed Azaylia in August 2020 but she was diagnosed with acute myeloid leukaemia at eight weeks old.

Treatment was unsuccessful towards the end of her life and the couple hoped to travel to Singapore to get Azaylia special CAR-T therapy but they were unable to travel after her health deteriorated. Doctors informed the pair that there were no more options left to treat the disease.

More than £1.5million was raised to get Azaylia to Singapore but Ashley has promised to distribute the funds to people going through the same experience.


MORE : Ashley Cain breaks down in tears during speech in heartbreaking video at daughter Azaylia’s funeral: ‘She changed my life, she saved my life’