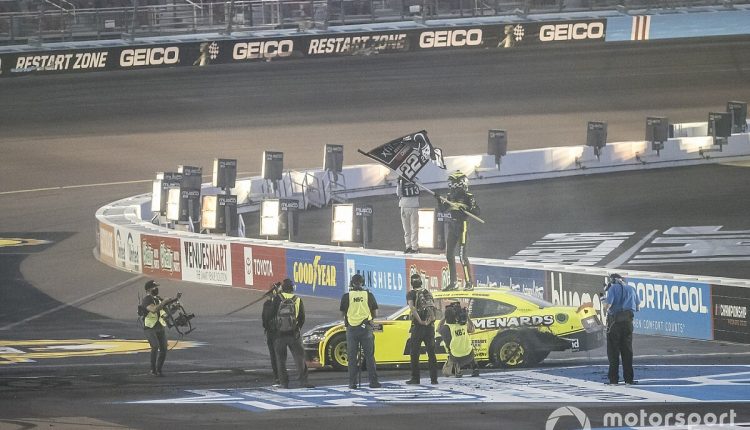 Cindric, 22, was leading late in the race when a caution sent the 200-lap event into a two-lap overtime. Cindric elected to pit for new tires and lined up third on the restart. Justin Allgaier, who was out of new tires, inherited the lead on the restart.

Cindric quickly got around Allgaier with one lap remaining and passed Noah Gragson in Turn 3 of the final lap and held on for the victory.

The win is Cindric’s sixth of the 2020 season and eighth of his career. Cindric is the son of Team Penske President Tim Cindric.

“Amazing effort by this No. 22 team. Everybody back at the shop, there was a lot of work put into this car,” Cindric said. “Roger Penske, John Menard, the Menard family … to be a champion in NASCAR – I’m speechless, I can’t believe it.

“This thing came to life on Lap 1. Talk about a driver and crew chief relationship. We were terrible in the spring race, I told (Brian Wilson) exactly what I needed and he gave it to me.”

Brandon Jones ended up third in the race, Michael Annett fourth and Allgaier rounded out the top-five (and second in the championship standings).

Said Allgaier: “I knew they were going to be good on tires, I was just hoping there would be some more cars between us in my rearview mirror.

“We just didn’t have the speed at the end, we were just a little bit off all night. The balance was good, just a little disappointing.”

Briscoe, who won a series-high nine races this season, finished fourth in the series standings. He is moving to the Cup Series in 2021, driving the No. 14 Ford for Stewart-Haas Racing.

“This is by far not my best race track. I was just too loose at the beginning and got looser and looser,” Briscoe said. “I’ve got to do a better job coming to this place.

“Definitely frustrating to finish fourth after the year we had, but to win nine races, overall very happy.”

Following the break between Stages 2 and 3, all lead-lap cars pit with Jones the first off pit road.

On the restart on Lap 99, Jones was followed by Briscoe, Cindric and Allgaier. The final Championship 4 driver, Haley, restarted sixth.

Allgaier quickly powered to the lead on the restart entering Turn 1.

With 75 laps left in the race, Allgaier held on to a small lead over Cindric as Jones ran third, and Briscoe fourth.

Cindric got to the inside of Allgaier off Turn 2 and moved ahead and into the lead entering Turn 3 on Lap 130.

On Lap 161, Allgaier became the first of the Championship 4 contenders to make their final green-flag pit stop of the race. Haley was next on Lap 163. Both Cindric and Briscoe pit on Lap 164.

Joe Graf Jr. wrecked in Turn 3 on Lap 170 to bring out a caution before green-flag stop were completed. Cindric stayed on the track and inherited the lead while Allgaier elected to pit for fresh tires.

When the race restarted on Lap 178, Cindric led the way with Allgaier fifth, Briscoe sixth and Haley eighth.

Chastain briefly grabbed the lead on the restart before Cindric got back around him to move into the top spot.

With 10 laps remaining, Cindric had moved out to a more than 1-second lead over Allgaier as Chastain rain third, Annett fourth and Briscoe fifth.

On Lap 198, Briscoe spun and wrecked in Turn 3 to bring out a caution and send the race into overtime.

Cindric, who had a set of new tires left, decided to pit, while Allgaier – who was out of new tires – remained on the track and inherited the lead.

At the start of overtime, Allgaier led the way followed by Chastain and Cindric. Haley was eighth and Briscoe restarted ninth.

Following the break between Stages 1 and 2, most lead-lap cars pit with Allgaier the first off pit road. On the restart on Lap 54, Tommy Joe Martins led the way as the only driver to remain on the track.

Briscoe quickly moved into the lead on the restart only to see Allgaier get around him and reclaim the top spot one lap later.

With 25 laps to go in the stage, Allgaier had built a nearly 1-second lead over Cindric as Gragson ran third, Briscoe fourth and Annett fifth.

On Lap 75, Martins appeared to lose the engine in his No. 44 car and dropped fluid on the track which brought out a caution.

Most of the lead-lap cars remained on the track and Allgaier led the way on the restart on Lap 81.

Cindric went to the inside of Allgaier in Turn 3 and came away with the lead on Lap 84.

With five laps remaining, Cindric maintained a small lead over Allgaier with Briscoe in third. Jones was fourth and Gragson fifth.

Briscoe held off a last-lap challenge from Cindric to take the Stage 1 victory, his 13th stage win of the 2020 season.

Allgaier was third, Gragson fourth and Chastain rounded out the top-five.

Allgaier started on the pole and remained out front when a caution was displayed on Lap 3 for Jeffrey Earnhardt who hit the wall on the backstretch.

On the restart on Lap 7, Allgaier was followed by Briscoe and Cindric.

After cars fanned out four-wide on the restart, Briscoe powered into the lead as Cindric moved into second.

NASCAR displayed a competition caution on Lap 22 to allow teams to check tire wear. Most of the lead-lap cars remained on the track. The race returned to green on Lap 27 with Briscoe still out front.

On Lap 28, a four-car wreck erupted in Turn 2 which placed the race back under caution. Again, the majority of lead-lap cars remained on the track. The race returned to green on Lap 35 and Briscoe still the leader.