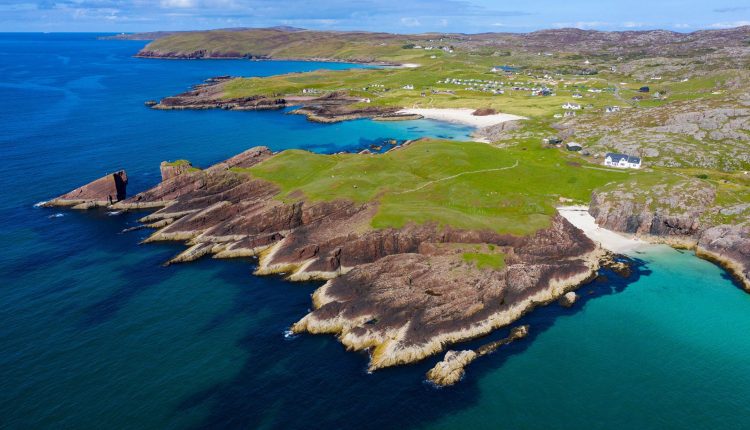 Before plants or animals existed, this 250,000-ton rock fell in the mud. Here’s how we know

Rain and winds buffeted the northwestern Scottish coast as Zachary Killingback inspected a rock stuck in the mud. It wasn’t just any old stone: Weighing in at nearly a quarter of a million tons and measuring longer than a jumbo jet, the boulder had careened to its position some 1.2 billion years ago, which means it may be the oldest rockfall yet found on land.

Killingback, a master’s student at England’s Durham University at the time, wanted to know just what happened in the few catastrophic seconds when the humongous boulder gave way. Rocks have fallen off cliffs ever since Earth was cool enough for rock to form, but few ancient rockfalls have been found in the geologic record. This one in Scotland offers a window into what was happening on the planet before animals took their first breaths, before plants stretched roots into the ground, before modern continents had even taken shape.

As a team describes in a new study published in the journal Geology, the boulder plunged less than 50 feet into watery sediments, the force of impact cracking the rock and injecting mud into the fractures. While the cliff it fell from has eroded away, the rockfall remains. Every rock has a story, and scientists are tasked with taking what’s known about our planet’s many physical processes to tease out tidbits of its past.

“It does show you how much amazing detail you can pull out of one block of rock if you approach it really carefully,” says Cara Burberry, a structural geologist at the University of Nebraska-Lincoln who was not involved in the study. “They’ve documented it really beautifully.”

Northwest Scotland is a wonder to take in, with turquoise waters washing into small beach alcoves nestled along the coast. The rolling landscape records billions of years of our planet’s history as supercontinents formed and broke up, and rivers and lakes ebbed and flowed.

“It’s geology Disneyland for the Brits,” says Alex Webb, a geologist at the University of Hong Kong who was not involved in the study.

Generations of scientists have visited this ancient landscape, now a popular site for undergraduate field excursions. “If it wasn’t for COVID, I’d be on these very outcrops today,” says study author Bob Holdsworth, a structural geologist at Durham University.

During one of these student trips, Holdsworth and his colleagues noticed that something was off with a block of rock near the village of Clachtoll. The boulder is part of the Lewisian gneiss, rock as old as three billion years that was squeezed under intense pressure as it formed, causing minerals to align in stacked layers known as foliation. Across most of the region, these layers trend northwest-southeast. But the boulder’s layers are rotated 90 degrees.

Holdsworth and his colleagues had an inkling that the rotated layers and other curious features of the rock’s fractures might be the result of a precipitous plunge, but they needed more data to make the case. So Killingback took on the challenge for his master’s thesis research.

Gathering clues in the field

The site of the rockfall was Killingback’s favorite field trip as an undergraduate student. Organized excursions with his classmates were often challenging for Killingback, who is autistic. Navigating through crowds of students, processing rapid-fire instructions, and the barrage of sensory stimuli in the field presented constant obstacles.

The Clachtoll trip, however, was different. Rather than a professor guiding them through the geologic sights, he says “you were sort of let loose—I loved it so much.”

He returned for his master’s work in September 2016 to carefully map the boulder’s structure. The wind tore through the hills as rain pounded down, but Killingback worked through each task as efficiently as he could before dashing back to the safety of his car to review notes and plot next steps. Even in his vehicle, the winds made themselves known. “I thought I was going to blow away every night,” he says.

On his last day in the field, undergraduates on a trip flooded the site. Killingback finished up his work as the group scampered over the rocks, then he returned to the lab to reconstruct a glimpse into the planet’s ancient past.

The geologic story Killingback and his colleagues unraveled goes a bit like this: Some 1.2 billion years ago, a basin was forming in what is now Scotland’s northwest coast. Lakes filled the region, and rivers rushed through, laying down layers of jumbled rocks and red sediment. A mighty earthquake may have shook the ground, perhaps from land stretching into the basin, and the boulder fell off a cliff. It twisted slightly as it fell, causing its internal layers to orient at a right angle to the rest of the rocks of the region.

When the rock landed, cracks emanated from its top and bottom. Today the cracks are filled with red mud, and slight differences provide evidence of the fall. The sediment in cracks on the top is layered, a sign that it was progressively washed into the crevices over time. The cracks on the bottom, however, have no such layering and are filled with much finer sediment, pointing to a rapid injection from the force of impact. Burberry calls this pattern a “smoking gun” for the rockfall.

The rock slid on impact, evidenced in part by a large crack through the front of the boulder, Killingback says. The team also took small cores of the rock to the lab to test how much force it takes to pull the rock apart. That figure helped determine how far the rock fell: likely less than 50 feet.

“How have we not noticed this before? It makes so much sense,” says geologist Catherine Mottram of the University of Portsmouth, England, who takes her undergraduate students to the region every year but was not part of the study team. “I’ve literally sat on that [boulder] several times and eaten my lunch.”

Stories hidden in the rock

For Killingback, the biggest challenge was translating his ideas into a written report—a difficulty not uncommon for autistic people. “I essentially think in pictures,” he says. “I had my entire thesis in my head … like a silent documentary.”

Turning that mental film into a written tale took him another two years, he says. “I was just secretly wishing someone would invent a technology for me to plug a USB stick into my head and download it all.”

Killingback devised coping strategies, including explaining the various bits of the study to his mother and then immediately writing down his words. In the end, it paid off, resulting in an illuminating study.

“It’s a kind of unique opportunity to see a process which we know is always happening but we rarely see preserved in the rock record,” says Christopher Jackson, a geologist at Imperial College London who was not involved in the new research.

Part of the fun of geology is the detective work involved in identifying each rocky clue. In Killingback’s paper, Webb says, “the joy of figuring this out sort of bleeds off the page.”

Hades Dev Shows How Much Work Goes Into Its Gorgeous Visuals

How the death of business travel will change your next…