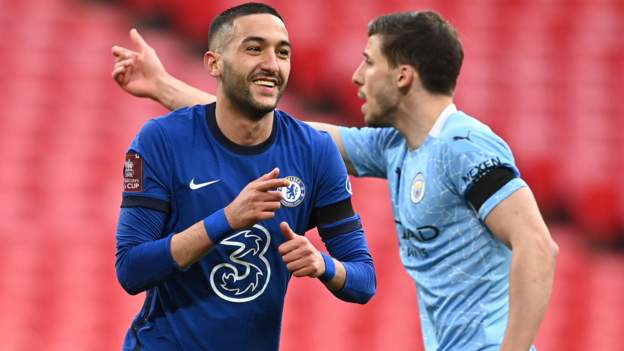 Champions League final will be good advert for football – Pep GuardiolaDate: Saturday, 29 May. Kick-off: 20:00 BST. Venue: Estadio do Dragao, Porto. Coverage: Live commentary on BBC Radio 5 Live with build-up from 18:00; live text commentary on the BBC Sport websiteManchester City will be a “completely different beast” to the side beaten twice by Chelsea in the past few weeks when the two meet in the Champions League final, says Jermaine Jenas.

Chelsea have defeated Premier League champions City in the FA Cup and the league in the past six weeks.

The two clubs meet in Porto, Portugal on Saturday for the title of champions of Europe.

“I don’t think Chelsea can take much from those games,” said Jenas.

All you need to know about all-English Champions League finalHow tactile Tuchel bonded with players to turn Chelsea’s season aroundChampions League final: Pick your combined Man City v Chelsea XILawro’s predictions – Champions League final specialThomas Tuchel’s Chelsea overcame City 1-0 in the FA Cup semi-final at Wembley on 17 April before coming from behind to beat Pep Guardiola’s side 2-1 at Etihad Stadium on 8 May.

Speaking on BBC Radio 5 Live’s The Friday Football Social, former Tottenham and England midfielder Jenas said those defeats would not be weighing heavily on City’s minds.

“In the semi-final, City had Gabriel Jesus, Raheem Sterling and Ferran Torres up top,” he added. “All three didn’t get a kick. They were terrible really.

“It was such a different make-up compared to what Chelsea are going to come up against on Saturday.

“This City team is a juggernaut. This is a completely different beast Chelsea are coming up against.”

“Whether the last two Chelsea victories will have any psychological impact on City, I don’t see it that way,” he added.

“City played their ‘B’ team – not their strongest team – in those games.

“They will come into this full of confidence – they’ve had a brilliant Premier League season and finished well above Chelsea, who have improved under Thomas Tuchel.

“But if City put out their strongest team I think Chelsea are in big trouble.”

Tech Tech Boom: Hear the reviews of absurd and sinister inventions in this tech spoof showDare to dream: Sporting achievements many thought never could be done