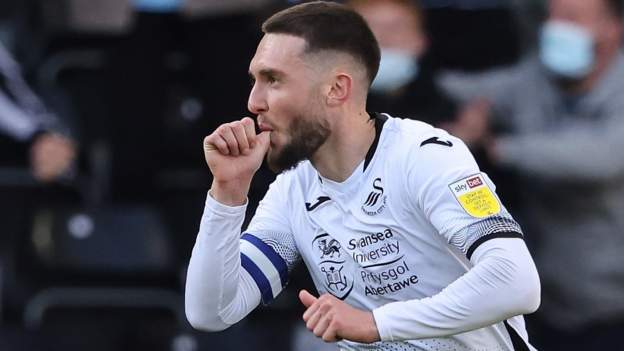 Matt Grimes celebrates after scoring his fifth goal of the seasonSteve Cooper will celebrate Swansea City’s Championship play-off semi-final triumph over Barnsley by watching Brentford on his laptop.

Swansea will battle the Bees for a place in the Premier League after a tense 1-1 draw with Barnsley secured a 2-1 aggregate win.

Despite his pride at reaching Wembley, Cooper will get straight back to work.

“As soon as I get home the laptop will be on and I’ll be looking at the opposition,” said the Swansea boss.

“Of course I’m proud. You’ve seen the journey of this football club, not just the two years I’ve been here. It’s a unique one and this is another chapter.

“But it’s not finished, we’ve got another one next week. It was a privilege to be in the stadium tonight, with fans being here and getting to Wembley.

“It’ll be a night to remember but I also know my biggest emotion is getting ready for next Saturday.”

After a 1-0 first leg triumph, Matt Grimes’ sparkling goal put Swansea 2-0 up in the tie, but Barnsley replied through Cauley Woodrow’s sharp finish.

Valerien Ismael’s team then piled pressure on as they looked to force the contest to extra time.

But Swansea came through a nervy finale to set up a meeting with Brentford on Saturday, 29 May.

“It’s going to be a very different game technically and tactically,” Cooper added.

“We have had two tough games against them. We didn’t play so well here, played well at their place earlier in the season.

“We have shown we can play in games like that this year. We are on the biggest stage now so we have got to go and do it again.”

Like the first leg, this was not a pretty contest as Barnsley’s high-tempo, direct style caused problems for Swansea.

But as they had on Monday night – and have done on numerous occasions this season – Cooper’s side proved they could compete in a physical contest.

Barnsley’s plan was to knock Swansea out of their stride from the outset, and Ismael’s men asked questions in the first half without creating many chances.

But it was Swansea who seized the initiative six minutes before half-time when Grimes curled the ball inside the far post.

Barnsley responded admirably after the break, claiming a deserved equaliser as Woodrow rifled in from the edge of the area.

The Tykes asked all the questions from that point on, but Swansea dug deep to hold onto their advantage.

Swansea’s Conor Hourihane challenges Barnsley’s Alex MowattOne game away from a top-flight returnLast season Swansea won their play-off semi-final first leg against Brentford 1-0 only to miss out on Wembley after a 3-1 loss in the second.

Having gone a step further this time around, Cooper’s team face a rematch with Thomas Frank’s side.

Swansea won their first leg at Barnsley thanks to the sort of resilient, determined display which they produced on a regular basis until a late-season dip in form ended hopes of automatic promotion.

The hosts dealt with a Barnsley barrage at Oakwell, and it was similar story for much of the second leg.

Chances were at a premium in a first half lacking quality, as Callum Brittain fluffed one shooting opportunity from a corner and lifted another effort beyond the far post.

The one touch of class was provided by Grimes, who brought the ball down just outside the box after Brad Collins had palmed out Conor Hourihane’s free-kick.

Grimes’ quick feet took him past the onrushing Brittain before he guided a glorious effort into the far corner of the net.

Barnsley heads did not drop, with Carlton Morris seeing an effort saved before Jordan Williams’ far-post shot was blocked by the sliding Jake Bidwell.

Swansea were creaking, and Barnsley deservedly levelled when Williams led a rapid counter-attack before squaring for Woodrow to flash a crisp shot into the bottom corner of the net.

The hosts were camped in their own half in the closing stages but, for all the late control, Barnsley could not conjure the sort of clear-cut chance needed to keep their season alive.

Relief reigned among 3,000 Swansea fans – watching their team in the flesh for the first time in 441 days – when the final whistle eventually came.

Three years after relegation from the Premier League, Swansea are are one game away from rejoining the elite.

Barnsley’s Alex Mowatt battles with Swansea’s Jamal LoweWhat next for Barnsley?Promotion was not on Barnsley minds when Ismael arrived at a club who were 21st in the table in October 2020.

Ismael’s impact has been spectacular, with Barnsley claiming a play-off spot having taken 74 points from his 39 games in the dugout.

They came up just short despite making Swansea work for 180 minutes.

The challenge now is to maintain momentum next season.

Captain Alex Mowatt is out of contract and will not be short of suitors this summer, while Daryl Dike’s loan from Orlando City is now at an end – although Barnsley did have an option to buy in the deal which brought him to Yorkshire.

The good news for Barnsley is that Ismael signed a three-year deal when he took over at Oakwell.

Assuming he stays around, Barnsley will feel another promotion push is possible in 2021-22.

“We showed a lot of character and determination over the last two games.

“Respect to Barnsley and the journey that they’ve been on this year. They’ve been as in-form a team as anybody in the second part of the season.

“They test you in a different way. It’s hard to play against and it’s hard to get rhythm.

“So we knew we had to do certain parts of the game well and we did. What I like about that is that, fans back in the stadium for the first time, people being away for 14 months.

“We’re going through a pandemic and they’re seeing a team that’s just fighting and giving everything they can for their people. That’s important to me.”

“Congratulations to Swansea. I think they deserve to be in the final. When you see the two games, they were really clinical.

“We did our job. We scored a goal away. We wanted to stay in the game all the time. Swansea’s quality made the difference, it’s as simple as that.

“We can be proud of our performance. We showed why we are in the play-offs – we deserved to be here.

“For sure we are disappointed but from tomorrow we have time to reflect and see how we did this season with one of the smallest squads and youngest squads.”

Jay Fulton (Swansea City) is shown the yellow card for a bad foul.

Jordan Williams (Barnsley) wins a free kick in the defensive half.

Attempt missed. Michal Helik (Barnsley) header from the centre of the box misses to the left. Assisted by Jordan Williams with a cross.

Attempt missed. Carlton Morris (Barnsley) header from the centre of the box is close, but misses to the left. Assisted by Mads Andersen.

Korey Smith (Swansea City) wins a free kick in the defensive half.

Attempt saved. Connor Roberts (Swansea City) right footed shot from the right side of the box is saved in the bottom left corner.

Connor Roberts (Swansea City) wins a free kick in the defensive half.

Attempt missed. Carlton Morris (Barnsley) header from very close range is just a bit too high. Assisted by Cauley Woodrow with a cross following a corner.

Attempt missed. Carlton Morris (Barnsley) header from the right side of the six yard box is close, but misses the top right corner. Assisted by Alex Mowatt with a cross following a corner.

Marc Guehi (Swansea City) wins a free kick in the defensive half.

That Peter Crouch Podcast: What goes on in the Premier League Captain’s WhatsApp group?Just One More Thing The simple home workout that is proven to boost your brain power