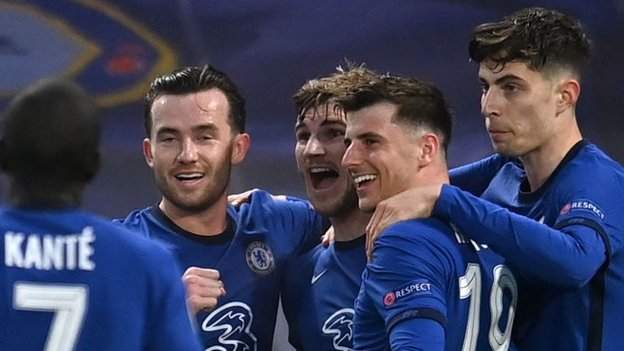 Timo Werner has been directly involved in 22 goals in all competitions this season (12 goals & 10 assists), the most of any Chelsea playerChelsea will face Manchester City in the Champions League final in Istanbul after convincingly overcoming a fading Real Madrid at Stamford Bridge.

On a night of high tension, even behind closed doors, Chelsea fully deserved a victory that sets up an all-English final against Pep Guardiola’s Premier League leaders on 29 May.

Thomas Tuchel’s hosts were grateful to goalkeeper Edouard Mendy for two fine first-half saves from Karim Benzema but they were able to build on the 1-1 draw they achieved in Madrid when Timo Werner headed in from almost on the goal-line in the 28th minute after Kai Havertz had lofted a finish on to the bar.

It set the platform for a second half of total Chelsea domination that was nevertheless laced with anxiety as the hosts missed chance after chance to put the game to bed.

Real’s former Chelsea goalkeeper Thibaut Courtois saved from N’golo Kante and Havertz, who also headed against the bar, while Mason Mount shot wildly over the top when clean through.

It was Mount, though, who finally sealed Chelsea’s place in their first Champions League final since they won the competition in 2012.

The outstanding Kante, who was also instrumental in the opening goal, fed substitute Christian Pulisic and his cross was turned in by Mount with five minutes left.

The result adds another chapter to the remarkable transformation under Tuchel since he succeeded the sacked Frank Lampard in January – and gives him the chance to make amends for the 2020 Champions League final, when his Paris St-Germain side lost to Bayern Munich.

Man City are the benchmark – TuchelListen: Reaction on the Football Daily podcastRelive Chelsea v Real Madrid as it happened, plus reaction and analysisChelsea take all the plauditsChelsea’s win over two legs was almost as emphatic as Manchester City’s dismissal of PSG in the other semi-final. The Champions League has two high-quality finalists.

Tuchel’s side, totally rejuvenated under their impressive German manager, were starting to assume dominance as the first half drew to a close before totally over-running a Real side that suddenly started to look its age in the face of the energy of Havertz, Werner and Mount – as well as Pulisic when he came on – allied to the all-round brilliance of Kante in midfield.

Mendy played his part with those crucial interventions from Benzema, with Antonio Rudiger also a rock, but the home goalkeeper was virtually redundant after the break as Chelsea produced a terrific display of skill and intensity.

The only downside was their failure to take one of the many chances they created until late on, leaving the door open for a potential reprieve for Real that would have amounted to grand larceny given how they were being let off the hook.

The crucial opening strike by Werner, whose endeavour has not been matched by goals this season, will be a major plus for Chelsea, as will the display of the rapidly improving Havertz, a smooth, elegant operator who knitted midfield and attack together superbly and was a constant threat.

A final too close to call?We will arrive in Istanbul with a clear focus to win the Champions League final – TuchelChelsea will go into the final as underdogs given City’s current form, but make no mistake they will fancy their chances and will pose a huge threat.

They have increased in stature as the season – and indeed this competition – has progressed and would not have been flattered had the scoreline on the night been even more convincing.

Chelsea were rock solid at the back, have a strong platform in midfield and were a real threat – albeit one that often went unfulfilled because of their own profligacy.

Tuchel will be burning to make up for last season’s final loss with PSG and he has already proved he can come up with a plan to beat Manchester City after Chelsea’s 1-0 win in the FA Cup semi-final, which has set up a Wembley meeting with Leicester City.

City will look back on a convincing win against Lampard’s Chelsea at Stamford Bridge earlier this season that really kick-started their campaign into action.

The final has the makings of an outstanding game and it would take some courage to predict the outcome with any conviction.

Uefa have reiterated the final will take place in Istanbul,external-link despite current lockdown measures in Turkey, after reports Wembley would be considered for an all-English final.

Ramos provided organisation and a customary yellow card but this Real side looked well past its best and in need of a rebuild, Hazard game but clearly nowhere near full fitness.

They got past Liverpool over two legs in the quarter-final based on a fine win at home but this was a toothless performance with only the evergreen Benzema, now 33, a danger.

Ramos and Luka Modric, while still making key contributions, are both 35 and Real must now start looking even beyond those Bernabeu legends when plotting the future.

Real looked tired, uninspired and well beaten at the final whistle. This looked like a team that needs breaking up and a new era ushered in, exposed by Chelsea’s youth, zest and energy.

‘A huge performance’ – what they saidChelsea manager Thomas Tuchel, speaking to BT Sport: “They deserve to win. First off, it’s difficult because Real had a lot of possession and they made us suffer, but we were dangerous with counter-attacks and never lost the hunger, never lost their desire to defend.

“Second half was even better, the structure to defend and in the second half, we could’ve scored much earlier. It’s a fantastic achievement and big congratulations to the team.

“Real Madrid are always dangerous, they can turn nothing into goals. So, to hang in there, even when you have chances and miss them, they never lost concentration, focus, and a positive energy on the pitch. This was a huge performance.

Real Madrid boss Zinedine Zidane to Movistar: “They deserved the win. We fought and tried but they deserved to win and go through.

“The players who have played were fit to play. I’m proud of my boys: we tried, we have got this far – just one game from the final. Chelsea played a great match and have gone through and we have to say well done to them.

“We needed to be better going forward. We didn’t have any clear chances, they made a number of them and that’s football. Now we rest and think of La Liga.

“Of course we’re not happy. When you lose a semi-final you can’t be happy and that’s normal. It’s tough to take, but tomorrow we’ll be back out on the training pitch ready to go again.”

Back-to-back Champions League finals for Tuchel – the statsChelsea have reached their third Champions League final, also doing so in 2008 and 2012. Only Manchester United and Liverpool (four each) have reached more among English teams.Having also led PSG to the 2019-20 Champions League final, Chelsea manager Thomas Tuchel is the first manager to reach the European Cup/Champions League final in consecutive seasons with different clubs.Real Madrid have faced Chelsea more often without winning (played five, drew two, lost three) than any other opponent in their entire history in all competitions, while Thomas Tuchel has faced Real Madrid more often without losing than any other manager in Champions League history (played six, won two, drew four).This season’s Champions League final will be contested by two English teams for a third time, also occurring in 2008 (Chelsea v Manchester United) and 2019 (Liverpool v Tottenham). It’s only the eighth time two teams from the same nation will be contesting the final, with Spanish teams also doing so a joint record three times – 2000 (Real Madrid vs Valencia) and 2014 & 2016 (Real Madrid vs Atletico Madrid).Timo Werner scored his first Champions League goal in open play for Chelsea and his first since September 2019 for RB Leipzig against Benfica, ending a run of 17 appearances in the competition without one.At 22 years and 15 days, Mason Mount became the second-youngest Englishman to score in the semi-finals of the Champions League, after Wayne Rooney (21 years 182 days vs Milan). Mount is also the first Englishman to score at this stage for Chelsea since Frank Lampard in 2008.This was only the second time Real Madrid manager Zinedine Zidane has lost a two-legged Champions League tie in 13 attempts, also losing in the Last 16 in 2019-20 against Manchester City.Chelsea goalkeeper Édouard Mendy has kept eight Champions League clean sheets this season, the most ever by a goalkeeper for an English club in a single season.Chelsea have kept 18 clean sheets in 24 matches under Thomas Tuchel in all competitions (75%), compared with 26 in 84 games under his predecessor Frank Lampard (31%).Player of the match

Attempt missed. Reece James (Chelsea) right footed shot from outside the box misses to the left. Assisted by Kai Havertz.

Federico Valverde (Real Madrid) is shown the yellow card for a bad foul.

Christian Pulisic (Chelsea) wins a free kick in the attacking half.

Thiago Silva (Chelsea) wins a free kick in the defensive half.

Mason Mount (Chelsea) is shown the yellow card for a bad foul.

Eder Militão (Real Madrid) wins a free kick in the defensive half.

Luka Modric (Real Madrid) wins a free kick in the defensive half.

Eden Hazard (Real Madrid) wins a free kick in the defensive half.