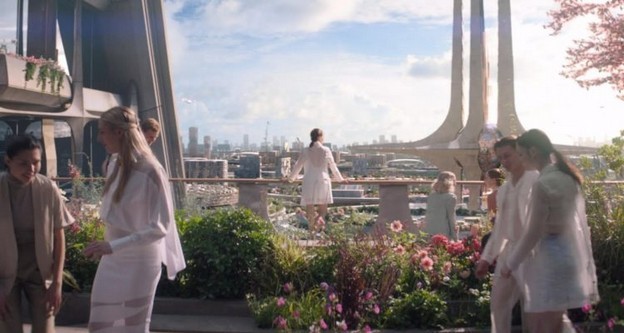 If you take a look at the list of the most successful films in the last decade, you may think it’s a science fiction fan’s paradise: in the top 10, you’ll need to go down nine spots to find one that doesn’t involve individuals with superhero abilities or spaceships (or both). Oh, there’s one about geneticists reviving dinosaurs and things going horribly wrong. The problem is, though, that none of these movies are science fiction movies. They do check a few boxes, of course, but in most cases, they have nothing to do with science (except the one about the dinosaurs – that does have a grain of science fact in its premise), which makes them fit the fantasy genre much better. Just look at their stories: the hero goes on a quest to defeat the overpowered evil with the help of skilled creatures like elves and mages superheroes, aliens, and robots.

Finding a true science fiction movie in today’s cinema makes fans feel like hitting the Atlantean Treasures jackpot. This shouldn’t come as a surprise, though, considering that true science fiction is rarely super-entertaining and will likely not generate as much box office income as, say, a superhero ensemble movie with a buildup of a decade. Not that there wasn’t enough material to work from – great novels and short stories are published every year, so Hollywood would have more than enough works to adapt to the screen. The problem is, profit has become the main driving force behind filmmaking, transforming it from the seventh art into a cash machine.

But all is not lost. True science fiction is increasingly finding its way to the big screens, attracting fans that want more than space dogfights and alien gods fighting monsters. And the number of true science fiction works is increasing as we speak thanks to the “streaming wars” fought by the ever-increasing number of streaming services on the market who reach back to well-known classics to increase their subscriber counts.

The name of Isaac Asimov routinely emerges in discussions about robotics thanks to the proverbial “three laws” the writer introduced in his novels that bind robots to do the humans’ bidding while forbidding them to harm humans and themselves – in that order. But by far his best-known work is the “Foundation” series – a history book of the future, depicting the fall of the vast Galactic Empire.

The novels focus on mathematician Hari Seldon who discovers that the statistical laws of mass action can be adapted to apply to human society, thus making it possible to predict the future – and influence it. Using “psychohistory”, as he calls his discovery, Seldon predicts the fall of the Empire followed by 30,000 years of dismay, chaos, and destruction – and crafts a plan to reduce this time period to just 1,000 years. He creates two Foundations – groups of scientists hidden at the two ends of the galaxy – meant to influence the remains of the human civilization to get through the dark times faster. But, as you might expect, not everything goes according to the plans – something new emerges that not even the genius of Professor Sheldon could predict.

A screen adaptation of Asimov’s “Foundation” series was planned for some time now – and it will finally become a reality thanks to Apple TV+. The series will be written by David S. Goyer of “The Dark Knight” fame, along with Josh Friedman who penned adaptations like H. G. Wells’ “War of the Worlds” and the “Terminator: The Sarah Connor Chronicles” TV series. The main role in the series – that of professor Hari Seldon – will be played by Jared Harris. The cast list, in turn, shows that it will be not a true adaptation but rather a story inspired by the novels – the trailer also shows that the producers have taken many liberties when adapting the story.

Even though the series will be just “inspired by” Asimov’s beloved novels, it is still a step in the right direction. How big, you might ask? We’ll see next year when the show finally hits the screens.

Aldous Huxley published his influential book “Brave New World” in 1932 and, along with George Orwell’s Nineteen Eighty-Four, his book became the archetype for the anti-utopia. The society depicted by Huxley in his book looks ideal and perfect, where everyone has a place, where nobody lacks anything, and where the order has finally overcome chaos. The beauty of his brave new world is, in turn, skin-deep, with conditioning, consumerism, homogeneity, and predictability have overtaken initiative, freedom, and individuality. Here, children are grown in artificial wombs, grown into pre-determined castes, and indoctrinated with the principles of Fordism – a religion-like system built around the principles of Henry Ford’s assembly line – from early childhood.

This seemingly ideal society has its share of rejects, of course – “savages” that still practice marriage, natural birth, family life, and religion, relegated to the Reservation outside the bounds of the civilized world. John, “the Savage”, a young man born to a former World State citizen, seizes the opportunity to finally experience the “brave new world” where his sincerity, naivety, and curiosity turn him into a celebrity. Of course, he quickly grows tired of it.

Huxley’s classic novel is not at its first adaptation – it has been turned into a stage play, a radio drama, and two TV movies. And now, it has been adapted to streaming, too.

The nine-episode series was written by David Wiener, known for his work on “Fear the Walking Dead”, and will star Alden Ehrenreich in the role of John the Savage, and Jessica Brown Findlay in the role of Lenina Crowne. The series was released on July 15 on the US-only streaming service Peacock.

Finally, let us mention a series that is not itself an adaptation of a classic science fiction story but an offshoot, a spinoff if you please, that finally tells a story that was left untold for too long.

For science fiction fans, Dune doesn’t need an introduction. Set in a future where humanity has spread across the galaxy, the novel series tells the story of the Atreides family tossed into a game of power and religion that circles around the most important substance in history: the spice melange.

Spice is a mysterious substance that prolongs life, gives the consumer extrasensory abilities, and in the right individual, it grants the ability of divination – as in seeing the future. This ability is essential for the Spacing Guild, a human subspecies specialized in space navigation, without whom the planets of the Empire would lose the ability to travel. Thus, the world depicted in the novel has three major poles: the Guild, the Great Houses, and the Padishah Emperor. And, of course, religion – this one is omnipresent through the practices of the Bene Gesserit, a sisterhood with its own agenda.

Frank Herbert’s classic science fiction novel series has begun in 1965 with the publishing of the novel “Dune”. Herbert wrote five sequels to the original, covering the history of the Atreides family from young Paul, an unwilling messiah unable to escape his fate, to Leto, the God-Emperor, who gives up his own humanity to guide the species through a seemingly inevitable doom. The series was later expanded by Frank Herbert’s son Brian Herbert and writer Kevin J. Anderson with 17 further novels – and a new trilogy is on its way to the shelves as we speak.

“Dune” is a story that’s very hard to adapt to the screen properly. Alejandro Jodorowsky tried and failed in the 1970s. David Lynch tried again in the early 1980s – the result was a movie that took way too many liberties when adapting the source material, so it went down in history as a failed attempt to grasp the essence of the books. In 2000, the first three novels in the original series were turned into a TV miniseries – this was the most faithful adaptation of the story to date and, while it did get some things wrong, it managed to at least grasp a part of the complex power dynamics of the universe. And now, director Denis Villeneuve is preparing a brand new adaptation of the story – “Dune”, set to be released this December, has an all-star cast (Zendaya, Javier Bardem, Josh Brolin, and Jason Momoa were cast for various roles, to name just a few). And the story will get a tie-in series from HBO Max, telling us more about the secrets of the Bene Gesserit.

“Dune: The Sisterhood” will tell a story from the lives of the Bene Gesserit, the influential sisterhood with plans within plans, and a very clear agenda: influence on everything that happens in the galaxy. Little is known about the actual story of the series – except that it will be related closely to the feature film. The series was created by Jon Spaihts, co-writer of the Dune feature film alongside Denis Villeneuve, known for his work on movies like “Prometheus”, “Passengers”, and “Doctor Strange”. The pilot episode of the series will be directed by Villeneuve himself. There is currently no word on when this will happen, though.

Prince Harry Defends His Brother – What If William Had Done the Same?

What is Xhaka for? and 18 times VAR has f***ed Arsenal

Barry Gibb recalls the time he missed out on meeting Elvis…