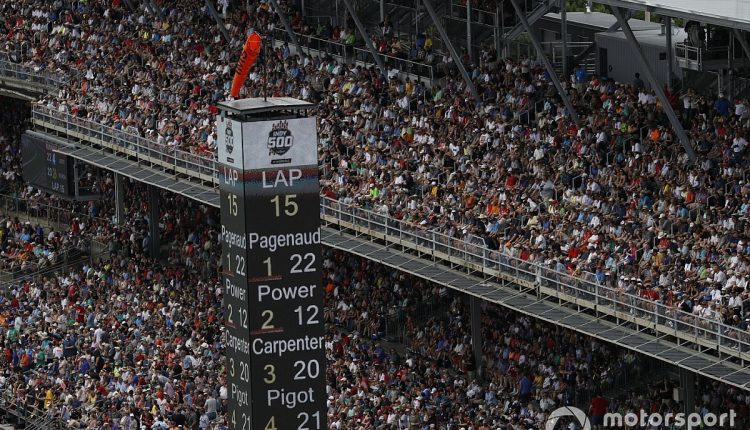 “Couple of weeks” before IMS can define Indy 500 crowd situation

Boles and Indiana governor Eric Holcomb – an IndyCar fan and longtime friend of Team Penske president Tim Cindric – were interviewed by Marty Snider on NBC Peacock’s live stream during the second day of testing at Indy.

After last year’s Indy 500 was delayed until August but still had to be held in front of empty grandstands, one of the burning topics for fans this year has been how The Greatest Spectacle in Racing might once more be witnessed in person by the world’s biggest one-day sporting crowd.

Boles said: “We’ve been working really closely with the state and we couldn’t ask for a better partner. Obviously the governor wants as many people at the venue as possible. We’re also working with the City of Indianapolis.

“I think you’re still looking at a couple of weeks before we know exactly what things look like. But we’re really confident and Roger [Penske, IMS owner] is 100 percent focused on as many fans in the stands as we can have. We don’t want to do a second year without fans and that’s why we’re focused on it. We’re gonna have fans here. All the protocols and all those other pieces are just gonna be in the next couple of weeks.”

Regarding the other days that traditionally pull in good crowd numbers, such as qualifying weekend and Carb Day, Boles was necessarily more vague.

“So we’ll worry about the ancillary events after we determine how does the Indy 500 look. We want a normal May in 2021… but the focus is on race day, May 30th.”

Gov. Holcomb was then asked by NBC Sports analyst Townsend Bell what data he is tracking, and what thresholds he’s looking for. The governor responded: “What we do with various events, whether it was March Madness basketball games, at various venues all over the state of Indiana… we look at what leads and drives the slope in the positivity rate that has to do with hospitalizations, that has to do with deaths, that has to do with the spread. Has it plateaued or not? And where you are on the slope.

“There are 92 counties in the state of Indiana and we’re monitoring what happens on a daily basis. And we then share that with leaders – elected officials, local departments of health – to figure out what’s on the horizon. It’s one elaborate equation that ultimately guides us with the results.”

Holcomb also commented: “This is a team effort, and it’s like one big pitcrew. A lot of data will get crunched and we’ll make the responsible decisions together.”

“[The 500] is in our DNA. There’s thousands of volunteers that come to this race and other races that are held here to prove that it can be done and in a very safe way. It will mean a lot.”