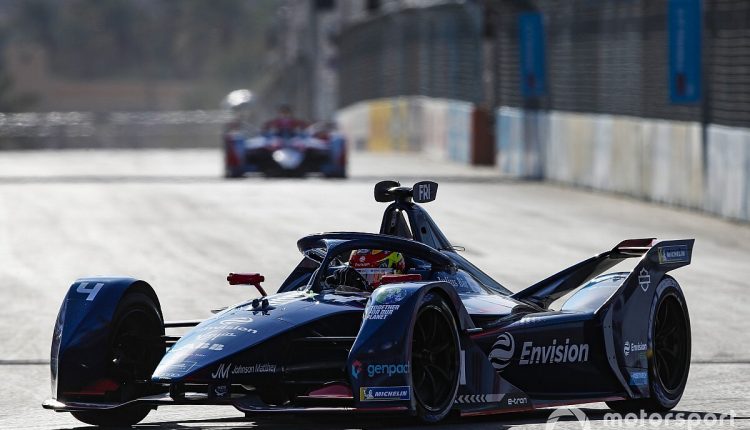 Having dominated the first Riyadh race on Friday, Mercedes de Vries looked set to continue his unbeaten run in the 45-minute practice session, having broken his own lap record from qualifying and then set a blistering lap of 1m07.440s on his full power run.

But Frijns, who failed to take part in qualifying on Friday after requiring a change of battery, managed to lap the circuit in 1m07.294s in the dying minutes of the session, outpacing his Mercedes rival by 0.146s.

Frijns’ rookie teammate Nick Cassidy also made a late lunge up the order, his effort of 1m07.449s putting him third ahead of Oliver Rowland, who was the first driver to break into the 1m07s in practice using last season’s Nissan powertrain.

Reigning champion Antonio Felix da Costa (DS Techeetah) ended up just over two tenths off the pace in fifth, recovering from a horrific performance in the first of the Diriyah races that left him well outside the points.

Edoardo Mortara was a promising sixth after scoring a podium for Mercedes’ customer Venturi on Friday, ahead of the works car of Stoffel Vandoorne.

But the 34-year-old was involved in a massive crash after the chequered flag was dropped, his Venturi car mysteriously heading straight into the wall at Turn 18 after his practice start on the back straight.

Mortara has been taken away in an ambulance as a precautionary measure but is conscious and talking, and can move both his fingers and toes.

Sebastien Buemi was eighth in the second of the two Nissans, ahead of the Jaguar of Sam Bird and the factory Audi of Lucas di Grassi.

The BMWs of Jake Dennis and Maximilian Gunther finished 12th and 17th respectively, the latter ending up more than a second off the pace, while two-time champion Jean-Eric Vergne could only finish 14th in the second DS Techeetah.

The only red flag of the session was caused by Andre Lotterer, who hit the wall at Turn 11 before coming to a rest at the following corner with visible damage to his Porsche.

Lotterer’s teammate Pascal Wehrlein, who qualified on the front row on Friday, was 18th quickest.

Correa still in “pain” but encouraged by comeback F3 test

Perez: Red Bull drive will “open many doors” for the future