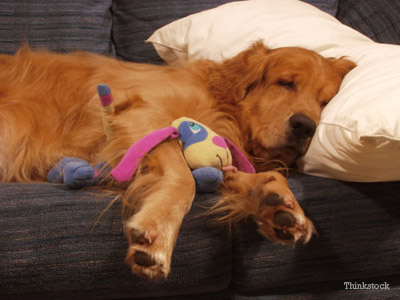 Last updated Aug 27, 2021
0
Share
Whether or not dogs dream isn’t known with scientific certainty, but it sure is difficult to imagine that they don’t. We’ve all watched our dogs demonstrate behaviors in their sleep that resemble what they do in a fully awake state. Paddling legs, whining, growling, wagging tails, chewing jowls, and twitching noses inspire us to wonder what our dogs are dreaming about.

What we know about dogs and dreams
While our knowledge on this topic is very limited, the following known information helps us believe that dogs do indeed experience dreams. According to MIT News, Matthew Wilson, a professor of neuroscience at MIT, and Kenway Louie, a graduate student in 2001,  have studied the relationships between memory, sleep and dreams. They found that when rats were trained to run along a circular track for food rewards, their brains created a distinctive firing pattern of neurons (brain cells). The researchers repeated the brain monitoring while the rats were sleeping. Low and behold, they observed the same signature brain activity pattern associated with running whether the rats were awake or asleep. In fact, the memories played at approximately the same speed during sleep as when the rats were awake.

Can we apply this to dogs?
Can we take what is known about dreaming in rats and humans and apply the information to dogs? Wilson believes that we can.”My guess is — unless there is something special about rats and humans — that cats and dogs are doing exactly the same thing,” he said, according to USA Today’s website.

It is known that the hippocampus, the portion of the brain that collects and stores memories, is wired much the same way in all mammals. According to healthday.com, Professor Wilson says, “If you compared a hippocampus in a rat to a dog; in a cat to a human, they contain all of the same pieces.” He believes that as dogs sleep, images of past events replay in their minds, much the same way people recall experiences while dreaming.

In people it is known that most dreams occur during REM (rapid eye movement) sleep, according to the National Institutes of Health. Dogs also experience periods of REM sleep. Psychology Today’s website says that during REM their breathing becomes more irregular and shallow. There may be muscle twitching during REM and, when one looks closely, rapid eye movements behind closed eyelids can often be observed. It is during REM sleep that behaviors thought to be associated with dreaming (legs paddling, twitching, vocalizing, etc.) are most commonly observed.

What we want to believe about dog dreams
When we observe our dogs as they sleep, it’s just about impossible to imagine that they are not dreaming. Just like the rats studied by Wilson and Louie, it is tempting to believe that our four-legged best buddies are reenacting their recent experiences; playing at the dog park, sniffing in the woods, chewing on a treasured bone, and chasing squirrels.

The National Institutes of Health says that Sigmund Freud theorized that dreaming was a “safety valve” for our unconscious desires. Perhaps he is correct, and, when our dogs sleep, they dream about catching the neighbor’s pesky cat, continuous belly rubs in conjunction with unlimited dog treats, and stealing the Thanksgiving turkey from the dining room table.

If you have any questions or concerns, you should always visit or call your veterinarian — they are your best resource to ensure the health and well-being of your pets.

Do Cats Really Love You Less Than Dogs?

A Photographer Gives An Inside Look At The Fall Of Kabul, Her Longtime Home

Biggest U.S. earthquake in more than 50 years strikes Alaska—here’s what we can learn

Why the U.S. once set off a nuclear bomb in space

Heads up! The cardiovascular secrets of giraffes