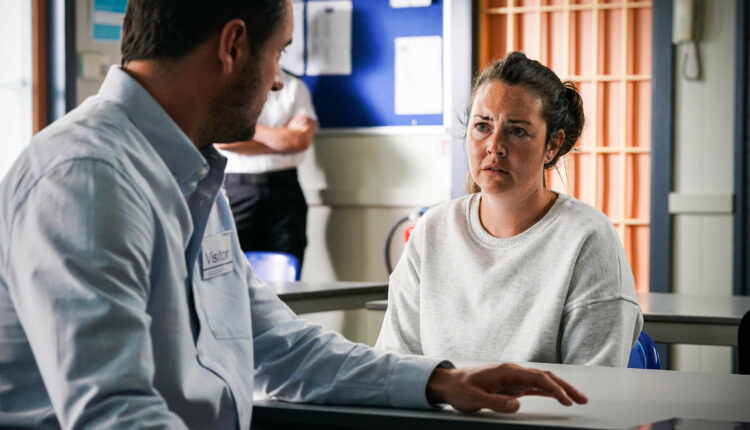 This is the first look as Stacey Slater returns to EastEnders, with Lacey Turner reprising her role as the fiery local.

Stacey was left rotting in prison after friend-turned-nemesis Ruby Allen (Louisa Lytton) falsely accused her of pushing her down the stairs, an incident that saw her lose her baby.

In fact, Ruby simply fell but Stacey was convicted. However, the truth recently came to light as Ruby’s conscience weighed on her and Jean (Gillian Wright) edged closer to the truth of her daughter’s innocence.

When Martin Fowler (James Bye) discovers what his wife Ruby has done, he is disgusted and pays a visit to former spouse Stacey in prison.

She is surprised to see him but shock turns to blind rage as Martin explains that he knows the truth about Ruby’s scheming.

Stacey doesn’t have time to feel vindicated; more infuriated that it took people so long to see the truth about Ruby.

As she is filled in on what Ruby has been up to since, Stacey vows revenge on her; and she truly means it.

But will this turn of events lead to her being released from prison? And will she ask Martin to take action against Ruby on her behalf?

Incidentally, Ruby is set to make a departure from Walford in coming weeks with boss Kate Oates promising a dramatic exit for Ruby.

The BBC executive of continuing drama told Metro.co.uk: ‘Jean is intent on bringing Ruby down and on clearing Stacey’s name and so Ruby is going to come to a slightly sticky end.’

The popular character will soon be out of her prison scrubs and back on on her old stomping ground – and she won’t be alone as Heather Peace has been cast as her prison pal Eve.

Producer Jon Sen teased: ‘That’s going to be huge. She returns from prison. As you know, she went to prison after a false accusation from Ruby, and she’s returning with somebody she’s met inside.

‘A new character called Eve, played by Heather Peace, and we’re really excited about her!

‘What that kind of friendship is that going to be? Because they come back having shared a prison experience that has united them in a very unique friendship, so that’s really exciting.’

Stacey’s first appearance back in EastEndersairs Thursday September 21 at 19:35 on BBC One.