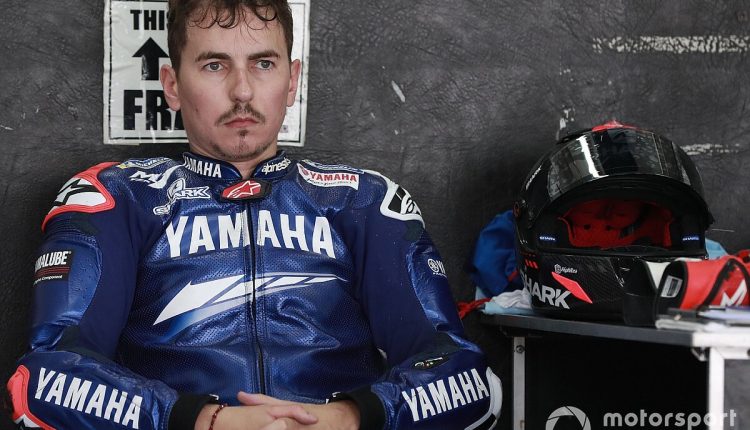 This was only fuelled by Yamaha electing against using Lorenzo as its standby replacement for COVID-hit Valentino Rossi for this weekend’s European Grand Prix, naming World Superbike rider Garrett Gerloff instead.

Lorenzo has only ridden the Yamaha four times this year since joining the marque as its official test rider, his programme heavily affected by the COVID-19 pandemic.

However, at the Algarve test last month he was four seconds slower than Espargaro on the 2019 M1, and hasn’t been doing any other riding in between testing duties.

When asked by Motorsport.com if Lorenzo was really the right person for Aprilia to help accelerate development of the RS-GP, Espargaro said: “With Lorenzo, the level and aptitude for Jorge are out of doubt; [he’s] one of the best riders in the last 30 years – a very, very, very fast rider.

“But I don’t know if his commitment, if his desire [is there], if he’s physically ready, I’m not really sure.

“He’s the only one who knows that, Aprilia is trying extremely hard to find fast riders.

“The market is not easy. But the good thing is that the Aprilia management is working very, very hard, I know, to try to help me to try to make the team stronger.

“But, again, he’s a very, very fast rider. That’s for sure. But I don’t know his current situation right now. So, it’s difficult to evaluate it.”

Espargaro believes anyone testing the Aprilia has to be fully committed to riding because it’s not currently a race-winning package.

“I feel good with the bike. But it’s not a winning bike. It’s not a Yamaha. So, the commitment has to be even higher than if you ride a Yamaha, you have to really push to the limit every single corner of every single lap, you have to risk more than the rest.

“We know that we have to do that. I’m pleased to do that I’m doing that every single session.

“I’m not sure if Jorge is in the situation to do this now.”

Dovizioso had been linked to Aprilia in recent months, but Motorsport.com understands it was never a realistic option for the Italian.

Nevertheless, Espargaro says Dovizioso as either a teammate or test rider would be “the best option ever” and should be the “priority”.