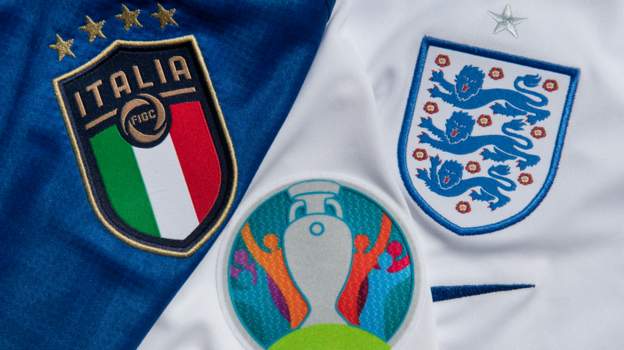 Euro 2020 final: How to watch and follow Italy v England on the BBC

Date: Sunday, 11 July. Kick-off: 20:00 BST. Venue: Wembley Stadium. Coverage: Live on BBC One and iPlayer from 18:20. Listen to live commentary on BBC Radio 5 Live. Live text commentary, goal clips, report and highlights on the BBC Sport website and app. England are one win away from a first major tournament triumph since 1966 – and you can watch and follow all the action from the Euro 2020 final with Italy on the BBC.

Sunday’s match, which kicks off at Wembley at 20:00 BST, is live on BBC One and BBC iPlayer.

Build-up starts from 18:20 for the biggest game for the Three Lions since the 1966 World Cup final.

Gabby Logan will be pitchside, and alongside her will be former England women’s defender Alex Scott and World Cup and European Championship winner Jurgen Klinsmann.

Kelly Somers will also be at Wembley with all of the squad news and player interviews.

BBC Radio 5 Live will have full match commentary from Wembley.

Mark Chapman presents build-up from 18:00 and there is a special 606 with Alistair Bruce-Ball and Chris Sutton from 23:00.

The BBC Sport website will have build-up to the final throughout Sunday followed by live text commentary, goal clips, highlights, report and reaction.

30 Animals That Made Us Smarter: The robotic arm that was inspired by elephantsIs there such thing as a perfect penalty? Can science help footballers shoot the perfect shot?

How to check your PC specs in Windows 10