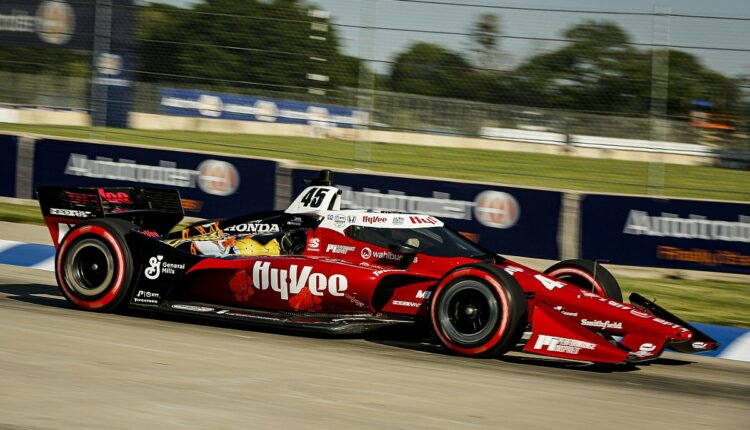 Team co-owner Bobby Rahal has for many years talked about running three cars full-time if it made financial sense, and while Leader Circle funding – the money given to the top 22 cars in entrant points at year’s end – is worth only approximately $825,000 per car this year, that may well prove the necessary boost for the three-time IndyCar champion to take the three-car plunge in 2022.

Ferrucci has started only four of the 10 rounds held so far this year, but with all four resulting in Top 10 finishes, and one of them coming at the Indy 500 (worth double-points) the #45 RLL-Honda entry currently sits 21st in entrant points.

That’s ahead of the #18 of Dale Coyne Racing with Vasser-Sullivan, the #7 of Arrow McLaren SP, the #4 of AJ Foyt Racing and the #59 of Carlin. It is also within 10 points of both the #48 Chip Ganassi Racing and #29 Andretti Autosport entries.

RLL announced today that Ferrucci will compete in its Hy-Vee-backed entry at the inaugural Music City Grand Prix of Nashville on August 6-8.

“I’m super excited to be back driving for RLL and Hy-Vee,” said Ferrucci. “It’s going to be an incredible race as it’s our first time racing in the streets of Nashville.

“The track has an incredible layout that has us racing over a bridge. I have been to the track before on a scooter so I at least know a little about the layout. I’m excited to get the chance to continue with consistent top-10 finishes for the team but I definitely think we can challenge for a win if the weekend goes smoothly.”

Randy Edeker, chairman, CEO and president of Hy-Vee said: “Our partnership with the Rahal Letterman Lanigan Racing team has continued to bring excitement to our employees and customers. We look forward to teaming up with Santino Ferrucci again.”
In 2021, Ferrucci competes part-time in the NASCAR Xfinity Series, driving for Sam Hunt Racing.

Motorsport.com has learned that Antonio Felix da Costa, who tested impressively for RLL last November, may also make his IndyCar race debut in the #45 this year, but Rahal, da Costa and his management do not wish to comment at this time.