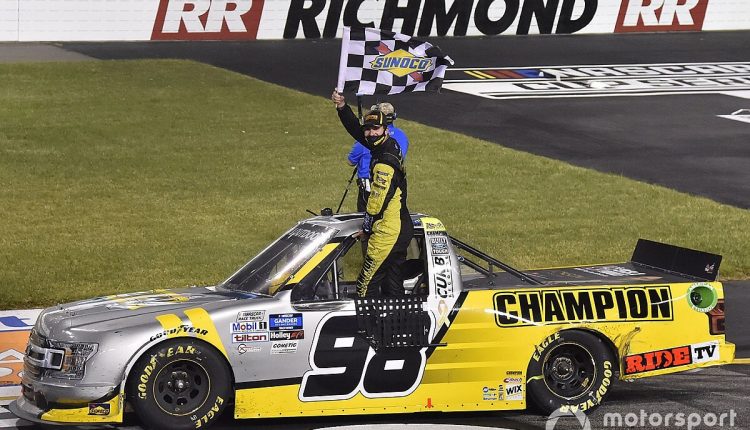 Enfinger rebounded from an incident early in the final stage when he developed a tire rub and was forced to pit under green following contact with his ThorSport Racing teammate Ben Rhodes.

Enfinger got back on the lead-lap and gradually worked his way back to the front, eventually passing teammate Crafton with seven laps to go, closing the regular season the way be began it – in Victory Lane.

“Matt seemed like he wanted to run the bottom but we ran the center really good. That was our advantage on the long run. We’ve been beating our heads against the wall lately but I feel like we’re going into the playoffs with some momentum.”

Following the break between Stages 2 and 3, several trucks elected to pit but Rhodes remained on the track and in the lead on the restart on Lap 153.

Enfinger grabbed the lead after the restart only to see Rhodes nudge Enfinger up the track and reclaim the lead a lap later. The move also left Enfinger’s No. 98 Ford with a tire rub.

On Lap 174, Austin Wayne Self spun in Turn 1 in an incident that also collected Johnny Sauter to bring out a caution.

A handful of drivers pit under the caution but Rhodes remained on the track and in the lead when the race returned to green on Lap 183.

Moffitt went four-wide in Turns 1 and 2 on the restart to go from 12th to fourth in one lap. On Lap 187, he got around Rhodes to take the lead for the first time in the race.

On Lap 196, Crafton moved into the runner-up spot, less than a second behind Moffitt.

Crafton finally ran down and passed Moffitt for the lead on Lap 219.

With 15 laps remaining in the race, Crafton had built a 1.7-second lead over Enfinger with Moffitt in third.

Enfinger closed to Crafton’s rear bumper with 10 laps to go, hoping to challenge him one final time for the lead.

Enfinger cleared Crafton with seven laps remaining to take the lead for the third time in the race.

Rhodes grabbed the lead with 21 laps to go and held off his teammate, Enfinger, to take the Stage 2 win, his first stage victory of the 2020 season.

Austin Hill was third, David Ragan was fourth and Zane Smith rounded out the top-five.

Following the break between Stages 1 and 2, most of the lead-lap cars trucks pit but Zane Smith remained on the track and in the lead on the restart on Lap 83.

With 35 laps to go in the second stage, Zane Smith maintained a small but steady lead over Enfinger with Rhodes in third.

On Lap 110, Enfinger got around Zane Smith to take the lead for the first time in the race as Rhodes moved into second.

Rhodes powered to the lead for the first time on Lap 119 as Enfinger fell in line in second.

With 15 laps to go in the second stage, Rhodes’ lead over Enfinger stretched to almost a second as Austin Hill ran third.

Zane Smith got around Austin Hill with four laps remaining and held on for the Stage 1 win.

Austin Hill, who started on the pole, took early command of the race and built up a nearly 2-second lead over Rhodes after 30 laps.

With 25 laps remaining in the first stage, Austin Hill’s lead was down to about a second with Enfinger running third.

On Lap 54, Ray Ciccarelli spun off Turn 4 in an incident that also collected Tim Viens to bring out the first caution of the race.

The race returned to green on Lap 62 with Austin Hill still leading the way.

On Lap 66, Zane Smith powered to the lead for the first time as Hill dropped to second.