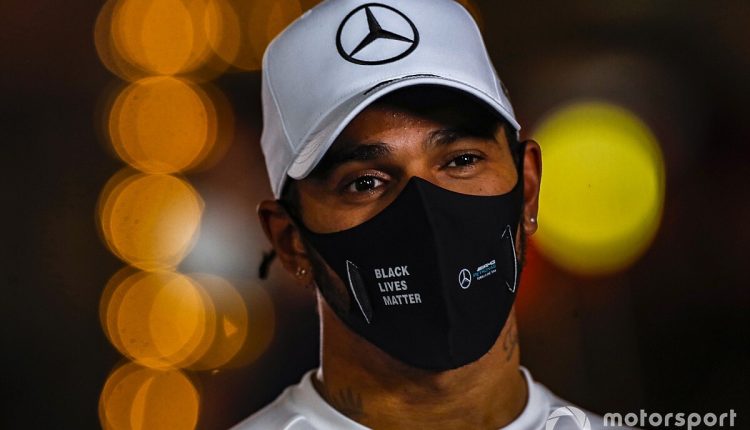 As Hamilton swept to his record-tying seventh title last season, the Briton opted to postpone talks over a new contract until late in the year in order to focus on his championship bid.

Both Hamilton and Mercedes insisted that a new deal was a formality, but no announcement was made before the end of the year, with team boss Toto Wolff revealing last month that “curveballs” were being thrown by both sides in contract talks.

But in an announcement on Monday, Mercedes confirmed that Hamilton had agreed a new contract with the team that covers the 2021 season.

“I am excited to be heading into my ninth season with my Mercedes teammates,” said Hamilton. “Our team has achieved incredible things together and we look forward to building on our success even further, while continuously looking to improve, both on and off the track.”

Hamilton stated throughout last year that he wanted his new Mercedes contract to have a wider scope, focusing on areas such as improving diversity and helping its environmental credentials.

Mercedes confirmed in the announcement that a “significant part” of the new deal including a commitment to greater diversity and inclusion in motorsport, taking the form of a joint charitable foundation.

“I’m equally determined to continue the journey we started to make motorsport more diverse for future generations and I am grateful that Mercedes has been extremely supportive of my call to address this issue,” said Hamilton.

“I’m proud to say we are taking that effort further this year by launching a foundation dedicated to diversity and inclusion in the sport. I am inspired by all that we can build together and can’t wait to get back on the track in March.”

The deal ensures Hamilton will continue his long-running partnership with Mercedes that has yielded six world titles since his move away from McLaren at the end of 2012.

Hamilton has helped Mercedes to a streak of seven consecutive constructors’ championships in that period – an F1 record – and broke the record for the most driver wins in F1 last year, surpassing Michael Schumacher.

The two parties had been set to open talks following Hamilton’s title victory in Turkey, only for him to contract COVID-19, pushing negotiations back.

Hamilton has spent the winter in the United States, but was in regular contact with team boss Wolff to get talks underway and eventually across the line.

“We have always been aligned with Lewis that we would continue, but the very unusual year we had in 2020 meant it took some time to finish the process,” explained Wolff.

“Together, we have decided to extend the sporting relationship for another season and to begin a longer-term project to take the next step in our shared commitment to greater diversity within our sport.

“Lewis’s competitive record stands alongside the best the sports world has ever seen, and he is a valued ambassador for our brand and our partners.

“The story of Mercedes and Lewis has written itself into the history books of our sport over the past eight seasons, and we are hungry to compete and to add more chapters to it.”

There are new rules this tax season, courtesy of COVID-19. Here’s what you need to know