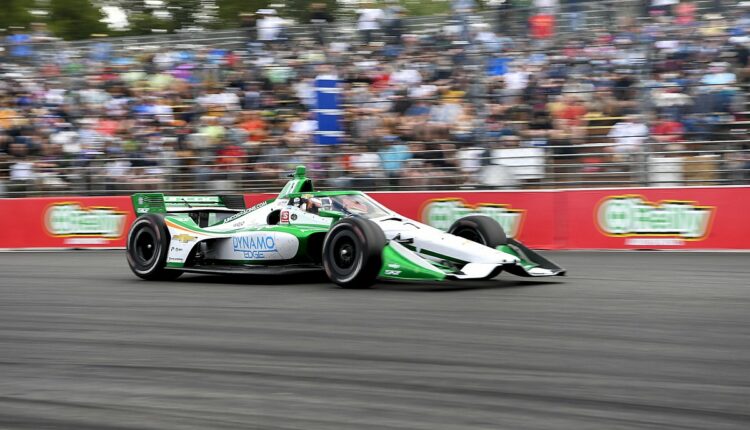 Ilott says Portland experience will pay off at Laguna Seca

Aside from a disrupted one-day test on the Indianapolis Motor Speedway’s road course, the GP of Portland was Ilott’s first experience of the NTT IndyCar Series. It was also the first race at the top of U.S. open-wheel for Ricardo Juncos’ ace junior formula team since the 2019 Indianapolis 500.

It was inevitable, therefore, that the 2020 Formula 2 runner-up would encounter issues through the two-day event. His Saturday issues he recounted here for Motorsport.com, but he turned 35 laps in opening practice – about on par with the series veterans – and in qualifying his performance was admirable. He was just 0.7sec off Marcus Ericsson’s pacesetting time in Q1 Group 1, and only 0.3sec from graduating to Q2.

In second practice in late afternoon, he turned 25 laps but was bottom of the times only because he was finally getting a chance to practice fuel-saving.

Thanks to penalties for other drivers, he actually started the race in 19th but, perhaps distracted by the ludicrously misguided late braking attempt from Romain Grosjean at Turn 1, Ilott slightly missed his braking point, clipped the rear of Scott McLaughlin’s Penske-Chevrolet which dragged him over the apex curb.

As the Juncos-Hollinger car slithered sideways off that, and Ilott attempted to wrestle it under control, he went straight on and cut across the bows of the cars of Helio Castroneves and Will Power, knocking them into each other and also being struck by both.

“Yeah, I had contact, it was a mess, and I will take the blame for that,” said Ilott who hadn’t been aware which cars he’d collided with. But thereafter he impressed, despite carrying car damage, until he had to pit and get pushed back to the paddock before half distance to have a new ECU installed.

On rejoining the course, as the team just wanted Ilott to gain more track time, Ilott turned his fastest time of the day on his penultimate lap. Only nine cars of the 27 starters turned a faster lap, although admittedly, some were running at a slightly reduced rate because they were on a two-stop strategy.

“At the point that [two-stopping] Graham Rahal was leading, I was on the same pace as him, apparently, and when I was in clear air I was able to really get some rhythm. But with the restarts… I don’t know why but we were really bad out of the last corner.

“Honestly, it was a tough weekend overall,” summarized Ilott. “Very short stints to get everything done on Saturday to prepare for the race. No one’s going to look at our weekend and say it’s outstanding, but you look at where things were a month ago, and here we are competing.

“And there was definitely progress, so starting at Laguna Seca this weekend as we finished in Portland, we should be in a much better place – and I mean me, as a driver. Personally, I need to improve on the first laps out of the pits on cold tires, and a bit with tire management.

“Then as a team, we need to find a little bit more in the car, and to improve the pitstops – which you’d expect, obviously, as the team is fairly new to all that.

“If those three things come together, I think we’re looking quite good.

“Of course, we also need to also have a clean run in terms of not having things that are a bit out of our control like ECUs going wrong. That would help.”

Justin Allgaier to return to JR Motorsports in 2022

Please Do Not Take Veterinary Drugs to Treat COVID-19, the FDA Says