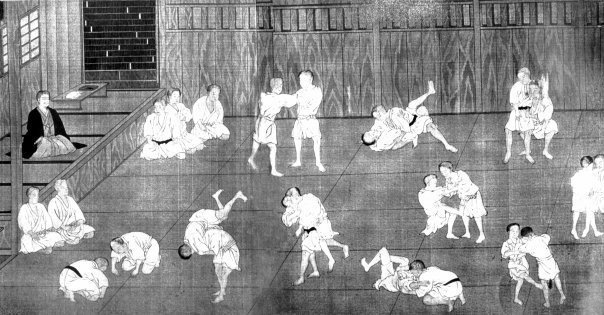 Jiu Jitsu is one of the ancient form of martial arts training. Jujutsu or Jiu-Jitsu, literally means the “art of softness”. Japanese have different martial arts styles, armed and unarmed techniques. All these martial art styles collectively, are called Jiu Jitsu. Jiu jutsu techniques evolved among the samurai of feudal Japan as a method for defeating an armed and armored opposition without weapons. The samurais had to learn Jiu Jitsu to be able to pin, joint lock or throw the opponent, because the striking was not useful against an armored component.

In jujutsu, practitioners train in the use of many potentially fatal moves. However, because students mostly train in a non-competitive environment, risk is minimized. Students are taught break falling skills to allow them to safely practice otherwise dangerous throws. Break falling skills also help you on the street.

As a “soft” art, jujitsu systems generally employ the principles of balance, leverage, and momentum to overcome opponents. This is in contrast to “hard” systems (for example, some styles of karate or taekwondo) that tend to emphasize developing power, strength, and speed. Although there is some diversity in the actual look and techniques of the various traditional jujutsu systems, there are significant technical similarities common to all schools.

In conclusion, Jiu Jitsu training can lead you to become a soft but deadly martial artist. It has so many variety of tools that you can use according to situation, in the gym or on the street. There are many ways you can learn Jiu Jitsu, and in my opinion, the easiest way is Fitness Jiu Jitsu Program.

Prediction of BYOD Boom by 2018

Guide to Starting a Successful Business